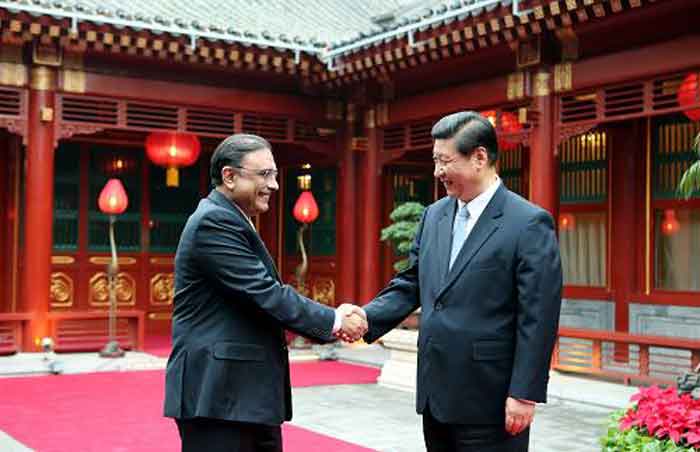 In a recent conversation with President Zardari, China’s newPresident, Xi Jinping declared that his country supported Pakistan in its efforts to maintain national sovereignty and independence and spoke about China and Pakistan being all weather friends.

Contrast this all weather affair to the tempestuous US Pakistan relationship that lurches from one trough to another but neither can call it off. Since Pakistan considers India a primary enemy to its national sovereignty and independence, it is no rocket science to conclude that the Chinese reference is mostly to India but could even be stretched to include the US.

Despite hopes, China India relations are unlikely to see any dramatic upturn. China wants an all or none political relationship with India.

It is tempting to over interpret Chinese intentions, but maybe the Chinese were telling both the US and Pakistan leadership that they too have an interest in the stability of Pakistan and that they could get more interested in Pakistan once the US lower their profile.

The underlying message could be that a US apprehensive of increased Chinese presence in AfPak would decide to stay on and rebuild this unstable region while China reaps the benefits of popularity without having had to fire a single bullet, lose a single man or spend a single dollar as aid. The simplest explanation could be that President Xi was merely repeating old formulations.

In his replies to a question recently, President Xi repeated old formulations that the border issue was complicated, it was necessary to resolve this through discussions while maintaining peace and tranquility on the border and that the two sides should co-operate and accommodate each other’s concerns.

His reported reference to the need for the two countries to keep their relations on the right track, mutual co-operation in infrastructure and other areas, cultural ties and tackling global challenges were the usual platitudes. Yet some of us here have tried to interpret this as a deep path breaking statement.

Despite our hopes, China India relations are unlikely to see any dramatic upturn. China wants an all or none political relationship with India. This means that India must send the Dalai Lama away even though India has repeatedly and loudly pronounced that it has accepted Tibet to be an integral part of China.

The Chinese leadership assesses that no Indian leadership will accept a compromise that repudiates the McMahon Line. This suits China and overtime, it has once again extended its claim to Arunachal Pradesh…

However, China is unwilling to create conditions that are amenable for the return of His Holiness to Tibet. China does not accept that India has no intention to destabilise China through Tibet. It therefore routinely transfers its frustrations with the continued protests and self immolations (102 by February) in Tibet by blaming the Dalai Lama and, by implication, India.

Meanwhile, there is a slight dichotomy in its understanding of what India can do or its intrinsic strength. It pretends to disregard Indian competition as anything serious yet worries both about the nature of India-US relationship and Indian moves to strengthen relationship with China’s neighbours.

Like Pakistan, it believes that India has big power interests in developing relations with Afghanistan. The Chinese leadership assesses that no Indian leadership will accept a compromise that repudiates the McMahon Line. This suits China and overtime, it has once again extended its claim to Arunachal Pradesh (Southern Tibet), keeping the border quiet and tranquil, unlike the volatile India Pakistan border, increase mutual trade giving hope to many Indians that this would be the route to better China India relations.

Even though IMF figures for economic indicators put China way ahead of India in 2012 with a per capita GDP of US$ 9416 for China and US$ 3851 for India, GDP growth rate of 7.7% and 5.3%, inflation at 2.6% and 7.5% respectively with an investment rate of 48% compared to India’s rate of 36%, China has continued to strengthen its footprint in India’s neighbourhood as it endeavours to restrict India’s influence to its national boundary. Its latest arrangement in Gwadar testifies to this and is among the first long term and long distance forays into the Arabian Sea.

China’s big game is not against India but primarily the US. China has been making fervent efforts to increase its power projection capabilities through military modernisation, cyber capabilities and use of its deep pockets to extend influence through investment and infrastructure development in the countries on its periphery. It seeks to keep the US out of the Western Pacific. Chinese actions from the Sea of Japan to the South China Sea is designed to test US resolve and warn the neighbours about the resident power as against the distant power. It would want to send a similar message to India.