China is a peaceful country, but… 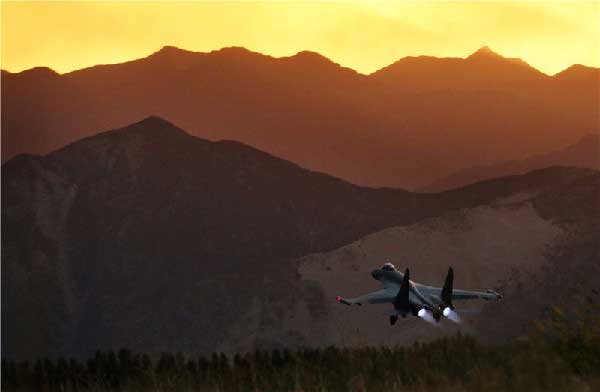 China is a peaceful country: it is at least what Beijing likes to say.

In June, Beijing reiterated its ‘peaceful’ doctrine in a White Paper (WP) on ‘China’s military strategy’, which affirmed that the country generally enjoys a favourable environment for development, though external challenges are increasing.

Of course, in Beijing’s eyes, the main villain is Washington; Beijing does not appreciate the US ‘rebalancing’ strategy’ and its enhanced military presence in the region. Then, there is Japan. Mao would have probably called Tokyo a US lackey; the WP affirms that Japan is “sparing no effort to dodge the post-war mechanism, overhauling its military and security policies.”

Although China is a peaceful nation, Beijing is getting ready for any eventuality.

The drill, coded ‘Joint Action-2015D’, is organized by the Chengdu Military Area Command (MAC) of the People’s Liberation Army (PLA). It is the first of five such drills, to be held during the current year in different MACs.

Xinhua further pointed out: “It will involve a total of more than 140,000 soldiers from over 140 PLA regiments of various types.”

That is not a joke, nearly one and half lakh of soldiers for a ‘joint operation system’ which includes the ground forces (PLA) as well as the PLA Air Force (PLAAF), the PLA Navy (PLAN), the Second Artillery Forces (missiles), the People’s Armed Police (PAPF), but also intelligence, reconnaissance and electronic warfare units. This is what He Qimao, head of the joint drill bureau of the PLA General Staff’s training department, announced.

On the ‘peaceful side’, the PLA will participate to several joint military exercises scheduled with more than 20 countries including Pakistan, Colombia, Thailand and Turkey in 2015 (the exercises with Russia and Thailand have already been completed).

It was further reported that the PLA plans to complete more than 100 such joint exercises, which should involve over 50 army corps.

Xinhua adds: “Military experts consider joint exercises the most demanding training, as they require a high degree of coordination.”

In March 2014, the Central Military Commission (CMC) which overlooks the activities of the PLA had set up a Leading Group ‘on joint military exercises’.

These Leading Groups are important structures for the coordination between the different ministries, departments and units to achieve a declared objective in any field of governance in China.

On the ‘peaceful side’, the PLA will participate to several joint military exercises scheduled with more than 20 countries including Pakistan, Colombia, Thailand and Turkey in 2015 (the exercises with Russia and Thailand have already been completed).

The South China Morning Post commented: “The 2.3 million-member People’s Liberation Army has stepped-up both the rigour and frequency of training as it emphasises more realistic scenarios for fighting and winning battles around China’s periphery. New stress has been placed on exercises integrating different branches of the armed forces, with a special command on joint exercises.”

One of the PLA’s exercises recently made the news, when pictures appeared on the Internet showing a military assault on a mock-up of the presidential palace in Taiwan. It was obviously not appreciated in Taipei. Taiwan’s Defence Ministry officially protested against the ‘exercise’. Later a Chinese military spokesman denied that the drill targeted any specific parties, on the PLA’s television channel.

Of course, China is a peaceful country.

Taiwan’s Defence Ministry officially protested against the ‘exercise’. Later a Chinese military spokesman denied that the drill targeted any specific parties, on the PLA’s television channel. Of course, China is a peaceful country!!!

At the same time, pictures of soldiers carrying out bedding and clothing during a supply drill appeared in the Chinese media. The caption says “on August 8, 2015, the PLA General Logistics Department (GLD) started its materials and POL (Petroleum, Oil, and Lubricants) supply drill codenamed ‘Supply Action-2015’ in the Tibet Autonomous Region.

Another picture shows troops receiving ‘vital supplies by way of vertical replenishment’, while another unit sets up pipelines for POLs supply; also seen a group of armored vehicles refueling during the same ‘supply drill’ as soldiers are moving military materials and drinking water during a replenishing operation.

Probably part of the same drill, on August 11, China Military Online displayed a J-11 regiment of fighter planes, belonging to the PLAAF which was ‘kicking off its night combat training’ in Tibet on August 9.

The PLA website explains: “At a high plateau military airfield surrounded by snow-clad mountains, groups of J-11 heavy fighters were seen taking off amid twilight. They were to engage in a confrontation drill in the black sky.”

It further comments: “The regiment pays much attention to the training of air battle at night, which has become a routine training program in its annual training plan,” and gives some technical details: “To enhance the combat capability of the air force, China began to make J-11 heavy fighters by introducing from Russia the production line of Su-27 heavy fighter in 1990s. Since 2002, the China-made J-11 heavy fighters have been among the arrays of warplanes of the PLA Air Force. The J-11 and J-11A heavy fighters are now widely serving in the aviation troop units of the PLAAF and the PLAN.”

In the meantime, the Chinese press praised ‘the development of transportation in Tibet over past 5 decades’.

…Above the railways and highways, the air transportation in Tibet also embraced a huge leap-forward. In the half-century development, over 24.71 million passenger trips were made and the total volume of goods reached nearly 329,900 tons.”

Xinhua published photos taken on October 30, 2010 showing an A319 plane landing in the Shigatse airport. The caption says: “People witnessed amazing progress of the transportation in Tibet over the past five decades. A total of 75,000 kilometers road have made the transportation in Tibet much easier than 50 years ago. The Qinghai-Tibet railway, running from Northwest China’s Qinghai province to Lhasa, was opened in 2006. …Above the railways and highways, the air transportation in Tibet also embraced a huge leap-forward. In the half-century development, over 24.71 million passenger trips were made and the total volume of goods reached nearly 329,900 tons.”

As mentioned in an earlier post, the entire infrastructure in Tibet is meant for dual use (civilian and military).

Not so peaceful is the interview of General Zhu Wenquan, a former commander of the Nanjing MAC on China Military Online.

The retired General speaks of his latest book On Island War and offers his advices on global island and reef disputes. The military website adds: “[Zhu’s] comment also holds water for the current tension in the East China Sea and South China Sea.”

Zhu argues: “According to incomplete statistics, 85 countries in the world have disputes over more than 410 islands (peninsulas and reefs) in 83 places. They all indicate a stern fact that the island war is in progress.”

Answering why did he wrote the book, General Zhu Wenquan explains: “Comrade Deng Xiaoping once said that the three major tasks for China in the 1980s were fight against hegemony, economic development and the resolution of the Taiwan issue, but when I started this book in 2007, the Taiwan issue was still unsolved, not even today. As a military leader, I wrote this book to provide theoretical support for winning large and medium scale island wars and make my contribution to solving the Taiwan issue one day.”

China is a peaceful country …but always ready for war.

When Zhu Wenquan is asked how to break the island chain blockade, he answers: “The strait is flat, so if we cannot pass it, we can always fly over it. Some countries have deployed underwater submarines and monitoring systems on the islands, but we are fully able to destroy them with firepower if there is really a blockade. So strategically speaking, there is no need to overemphasize the island chain blockade. We should play it down.”

His conclusions are clear (even if not peaceful): “Developing China’s armed forces in the sea, air and space at a faster pace is the fundamental solution to all problems. If we have a powerful navy, air force and space troop, what are we afraid of? At that time, the first island chain will be like a straw rope that breaks at the first touch. Therefore, developing military forces in the sea, air and space is the only way to solve the island chain blockade.”

China is a peaceful country …but always ready for war.

One thought on “China is a peaceful country, but…”