Modern day China is based on the fundamentals created by Mao Zedong, also known as Chairman Mao.

He was a Chinese communist revolutionary who was the founder of the People’s Republic of China (PRC), which he ruled as the chairman of the Chinese Communist Party from the establishment of the PRC in 1949 until his death in 1976. His Ideologically borrowed from Marx–Lenin, on which his theories of  military strategies, and political policies are based and collectively known as Maoism.

Mao was the son of a prosperous peasant in Shoshana, Hunan. He supported Chinese nationalism and had an anti-imperialist outlook early in his life, and was particularly influenced by the events of the Xin Hai Revolution of 1911 and May Fourth Movement of 1919.

Mao was a Sino centric thinker of the twentieth century who viewed China as surrounded by a very inhospitable world dominated by colonialism and imperialism. Mao viewed China’s place in the world order by calibrating its relationship with the Soviet Union, the United States, Japan, and Western Europe. India was always considered as a British relic.

Evolving from an idealist to a revolutionary realist, Mao saw war as the inevitable result of the economic crisis of the 1930s. Mao’s views about the world were influenced not only by his communist ideology and dividing the world into two camps, socialist and capitalist, but also by a strong nationalist identity bearing  realism and pragmatism.

Today the world witnesses Xi’s China’s growing assertiveness, which essentially follows the Mao’s vision. Manifestation of this view can be  seen particularly in the South China Sea and in their latest row over the disputed borders with India.

This has resulted in greater insecurity arising out of Chinese intentions and has led to a more intense debate about how the world should respond. And also, what are the long term options available with India in countering China.

For some, the motives for China’s international behaviour are simply those of any emerging — or in China’s case, re-emerging — power.

However, to gain a more nuanced understanding of what is motivating Chinese behaviour, it is necessary to examine the narratives that underpin the Chinese worldview and China’s foreign policy behaviour.

Four key narratives are used by Chinese leaders and elites to justify Chinese foreign policy actions and interpret the world:

While these narratives are not the only things that shape Chinese foreign policy, when considered with other factors influencing China’s actions in the world around, they provide a more nuanced guide to China’s aims and ambitions. This knowledge can also help shape more effective responses to China, both in the short and long term.

To understand these four key narratives, we must have an over view and understanding of the Chinese world view.

Chinese worldview is ancient Chinese view on the order prevailing at that time,which was formed before Qin Dynasty with the ideal to achieve supreme harmony in the universe or the “Mandate of Heaven”.

This idea can be understood as a view which is based upon unique ethnicity,built over ancient culture, which has taken shape of the Chinese nation, an idea idealised by Mao’s Communist Party of China.

In the view of traditional ancient Chinese, the distinction between Chinese nation and the other nations was in the way of civilization development rather than the narrow concept of nationalism.

While at the system level, the tribute system for Qin Dynasty and other tributary states relationship was peaceful and mutually beneficial rather than colonial ways.

In contrast, Europe was war-torn in medieval times. The introduction and signing of Peace Treaty of Westphalia of 1648 ended the eighty years of war that killed approximately eight million Europeans. Westphalia Peace could be adjudged the basis of establishment of the modern international relations standards. These were dominated by the big powers which brought forth a series of great wars and catastrophes.

The century of humiliation, also known as the hundred years of national humiliation. This is the term used in China to describe the period of intervention and subjugation of the Qing dynasty and the Republic of China by Western powers and Japan from 1839 to 1949.

Chiang Kai-shek declared the end of the Century of Humiliation in 1943 with the abrogation of all the unequal treaties and Mao Zedong declared its end in the aftermath of World War II, with Chiang promoting his wartime resistance to Japanese rule and China’s place among the Big Four in the victorious Allies in 1945, and Mao declared it with the establishment of the People’s Republic of China in 1949.

Chinese politicians and writers,however, have continued to portray later events as the true end of humiliation. Its end was declared in the repulsion of UN forces during the Korean War, the 1997 reunification with Hong Kong, the 1999 reunification with Macau, and even the hosting of the 2008 Summer Olympics in Beijing. Others claim that humiliation will not end until the People’s Republic of China controls Taiwan.

In 2021, coinciding with the United States–China talks in Alaska, the Chinese government began referring to the period as 120 years of humiliation, a reference to the 1901 Boxer Protocol in which the Qing Dynasty was forced to pay large reparation to members of the Eight-Nation Alliance.This was due to the Chinese refusal to accept that the United States could, from the Chinese perspective, negotiate from a position of power.

China’s narrative of filial piety and familial obligation. In this view, China sees herself in the role as a father figure and benevolent overseer of a peaceful region, in which its neighbours willingly and without coercion pay tribute and homage. By the same token, if China’s neighbours do not willingly pay tribute and homage then this is seen to justify taking stronger measures to ensure that this familial order is respected.

While this narrative may justify China’s belligerence to the Chinese themselves,in their actions in South China Sea. Where China interprets US actions like its recent freedom of navigation patrol not as some limited exercise to uphold international maritime norms but as part of a long-standing effort to maintain its hegemony and keep China from resuming its rightful place in the world.

However, the narrative; the unchanging nature of cultural characteristics and the idea of history as destiny,goes to suggest why China and India continue to stand face to face over Himalayan border dispute with fluctuating tensions starting early 1950s. One must examine the map showing the extent of the Qing empire and the tributary states while drawing out obvious conclusions. 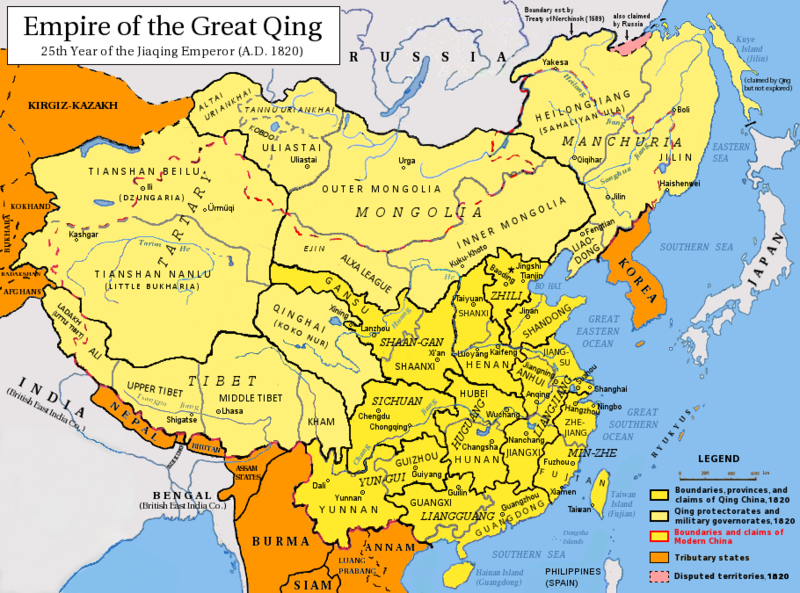 I for one would argue that India’s ancient world view was not too different from that of the ancient Chinese. Both, the Chinese and the Indian civilisations were based on culture drawn out of spiritualism and philosophy. They both had highly developed knowledge in the fields of medicine, astronomy, metallurgy and textiles, just to mark a few. Needless to say that these are the only two surviving ancient world civilisations on this day. And, they both held near similar views and ways when it came to strategy, diplomacy and warfare.

The famous philosophers, Confucius and Kautilya came from the same era in history.Their ideas are still relevant in the modern times as they were during the ancient period.

In both these worlds the wars were not fought till annihilation and complete destruction of the opponent. Instead, they were the means for building empires by subjugation with minimal violence in to tributary states.In majority of the cases mere show of strength was sufficient enough in achieving political aims. When ever the battlelines were drawn, seldom would the fight last for a few hours before the tributes were exchanged.

The ancient Indian concept was of Chakravartin, the ruler of universe. Something similar to title of the Chinese Qin, Han or the Ming emperors, the “ Mandate of Heaven”.

Before the Islamic invasions, India’s military and cultural influence spread from the present day Afghanistan, under the golden eras of the Gupta and the Mauryan dynasties of the north, right up to Cambodia under the rule of mighty Cholas of the South.

Going by the Chinese logic of “a century of humiliation”, Indian students could well argue that India underwent for over one millennium of humiliation subjected through mass destruction, pillage and conversions.

India’s present day boundaries have been inherited from the British. The disputed McMahon line along the Himalayan watershed was agreed between Tibet and India in 1914. The Republic of China was not a party to the McMahon Line agreement,but the line was part of the overall boundary of Tibet defined in the Shimla Convention, initialled by all three parties and later repudiated by the government of China.

The Indian part of the Line currently serves as the de facto boundary between China and India, although its legal status is disputed by the People’s Republic of China. And the reason for not recognising this agreement are the four key narratives discussed above. Since this agreement was during the period under the “Century of Humiliation”, hence it lacked justness.

However, on the contrary, India’s world view is the view held by international community based on rules, laws and conventions drawn for better world order, peace and tranquillity.

India can counter China by drawing references and strategy from her ancient world view. India has to be a Chakravartin, to stand up to those Mandated by the Heaven. For that to happen we need to build our economy at a faster pace, enhance prowess in science and technology and concurrently increase the military might. Ancient Chinese respected power and so do the present day generation. Hence build the power.