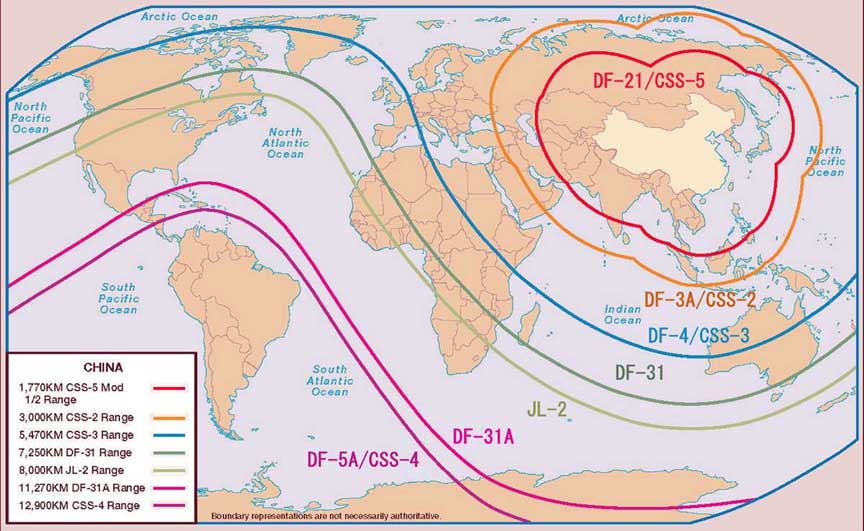 After China tested the simultaneous launch of 10 x DF-21 missiles in a single salvo during November 2016, a dispatch from Xinhua, China’s official news agency reported that the missiles “can destroy US Asia-Pacific bases at any time”. This is reminiscent of the Russian Ambassador to India addressing the National Defence College Course at New Delhi in year 2000 that Russia still had enough “nukes to destroy the earth 65 times”. Boy this is real scary, but aren’t we forgetting the term called ‘mutually assured destruction’?

…China is a class apart in such matters; be it blatant nuclear proliferation, violating the rules of NSG and yet playing global policeman, or stockpiling chemical and biological and chemical weapons despite being signatory to various conventions or treaties.

Before trumpeting the capability to destroy US bases in Asia-Pacific, did Xinhua or those behind the dispatch bother to analyze if that became the level of escalation, what part of China, especially the developed zones, would remain to see the next daylight. Surely the Chinese population is not that naïve whatever the propaganda by the Chinese Communist Party (CPC).

Xinhua reported on December 1 that the Chinese military conduct of the abovementioned flight test of the salvo of 10 missiles in November, was apparent show of force. The DF-21, originally developed as a strategic weapon, can carry conventional or nuclear warhead of 300kt, and has an operational range of 1500-1770 kms depending on its configuration. If China fires such a salvo at US target (s) in actual conflict, then she would automatically press the button for her own destruction also. It would not matter whether the salvo was carrying conventional or nuclear warheads because the US would not waste any time finding that out. Sure China’s strategic missile force has perhaps amassed some 500-550 missile launchers and over 2000 missiles but does it really matter if she doubles these numbers, in addition to her stockpile of chemical and biological weapons? Remember the Russian capability of destroying the earth 65 times?

Xinhua compared the DF-21 to America’s Pershing II intermediate-range missile that used a two-stage rocket and aerodynamic reentry vehicle. Interestingly, the Pershing II IRBs were dismantled under the US-Russia Intermediate-Range Nuclear Forces (INF) Treaty, even though US State Department has been officially alleging since 2014 that Russia is violating its INF Treaty obligations “not to possess, produce, or flight test” a ground launched cruise missile (GCLM) with a range of 500 to 5,500 kms or “to possess or produce launchers of such missiles”. Russia has denied such allegations and the US-Russia acrimony and discussion on the issue continues.

But China is a class apart in such matters; be it blatant nuclear proliferations, violating the rules of NSG and yet playing global policeman, or stockpiling chemical and biological and chemical weapons despite being signatory to various conventions or treaties. Obdurate denial remains the hallmark of China, with reverse rhetoric fired through the Chinese media.

The DF-41 can carry up to ten 150-300 kiloton yield thermonuclear warheads per missile capable of targeting entire US.

On 23 November 2015, China had conducted the sixth flight test of its new high-speed nuclear attack vehicle (DF-ZF) capable of global strikes and designed to defeat US missile defences. The DF-ZF hypersonic glide vehicle was launched atop a ballistic missile fired from the Wuzhai missile test center in central China’s Shanxi Province. The DF-ZF is believed to reach speeds of between Mach 5 and Mach 10 per hour. Current US missile defences are designed to counter non-maneuvering warheads with more easily-tracked ballistic trajectories.

China also could use the DF-ZF for conventional-armed rapid global strike capability; equivalent to America’s Prompt Global Strike. The 2015 annual report of America’s congressional US-China Economic and Security Review Commission released last November stated that China’s hypersonic weapons are in the developmental stages and are “progressing rapidly.” The glide vehicle could be deployed by 2020, and a separate high-technology ramjet-propelled cruise missile could be deployed by 2025.

On 05 December 2015, China conducted the launcher test of a new rail-mobile version of its latest intercontinental ballistic missile (ICBM), the DF-41 (CSS-X-20). A day earlier on December 4, a DF-41 was flight tested at the Wuzhai missile test center in central China’s Shanxi Province. The Chinese rail-mobile ICBM system is reportedly modeled on the Ukrainian-designed RT-23 (SS-24 ‘Scalpel’) rail-mobile solid-fuel ICBM. The test was to establish the tube launch system’s compatibility with China’s new rail car.

The DF-41 can carry up to ten 150-300 kiloton yield thermonuclear warheads per missile capable of targeting entire US. It is solid fueled, road mobile and has an estimated range of between 12,000 and 15,000 km. Chinese missiles aboard trains will be particularly difficult to track since the combination of high-speed mobility, launch cars disguised as civilian passenger trains, tunnel protection and secure reloading of missiles, coupled with multiple warheads, makes the system extremely hard to regulate or verify the number of systems.

China has more short range to intermediate range missiles than the rest of the world combined.

China has already built 2,000 kms of heavy gauge rail for this system and is likely to have more than 273,500 kms of such train tracks by 2050. The missile will likely be deployed sometime between 2018 and 2020 and is likely to be armed with China’s deadliest DF-ZF hypersonic glide vehicle (HGV). China has the world’s longest high-speed rail network, which is being expanded to other Eurasian countries.

China’s rail links coming to Nepal, Myanmar and most significantly, the China-Pakistan Economic Corridor (CPEC) all the way to Gwadar and Persian Gulf need to be taken note of. If the biggest missile can be rail-mobile, so can any other Chinese missiles. And China has more short range to intermediate range missiles than the rest of the world combined. China’s artillery, anti-air missiles, tanks, mechanized infantries can also be rail-mobile. Not only, is China preparing to speedily transport her forces through high speed rail but her deployment of all types of missiles on rails readies China for conflict in the Indian Ocean, Indo-Pacific and aims at enlarging the threat in being for India.

With all the military build up behind the euphuism that China will be attacked (by whom and where?), the CPC is still stuck with its archaic methods of perception building; the habit of a hen strutting around its coop has not gone away. It was the norm that whenever the heads of state of another country visited China, there would be a missile or strategic weapon tested. In the case of India even a deep intrusion when Keqiang visited India. Interestingly, the November 2016 simultaneous launch of 10 x DF-21 missiles in a single salvo was meant to signal US President-elect Donald Trump; or was it to ‘scare’ Gen James Mattis?

…ultimately it is the CCP’s insecurity because of what can happen internally to China combined with the lust to remain in power any which way.

Sure China is closely watching Japan likely upgrade its ballistic missile defences, establishing either Lockheed Martin Corp’s (LMT N) Terminal High Altitude Area Defence (THAAD) system or Aegis Ashore, a land-based version of the ballistic missile defense system used by vessels in the Sea of Japan – a planned expenditure of some US$ 1 billion. China is also concerned about the deployment of THHAD in South Korea.

China is euphoric about Donald Trump’s election-campaign announcement he would reverse President Obama’s rebalancing Asia policy; hoping US will pull back from Asia, which China interprets as handing over freedom of writ in Western-Pacific to China. But China is also worried about the possibility of Japan going nuclear, not to mention a BrahMos-armed Vietnam. But then it is China’s aggression against neighbours that is to blame for all this.

Finally, it is not the use of strategic weapons during conflict that would scare anyone in this era, especially a superpower like the US. These are more of deterrence value even though China remains shell-shocked with what incinerated Tianjin Port during 2015 – aliens or US space strike? But ultimately it is the CCP’s insecurity because of what can happen internally to China combined with the lust to remain in power any which way. That sure is what this external build up is all about even though bulk of China’s defence budget remains directed towards internal threats.

One thought on “China Belching Fire – Signaling or Insecure?”