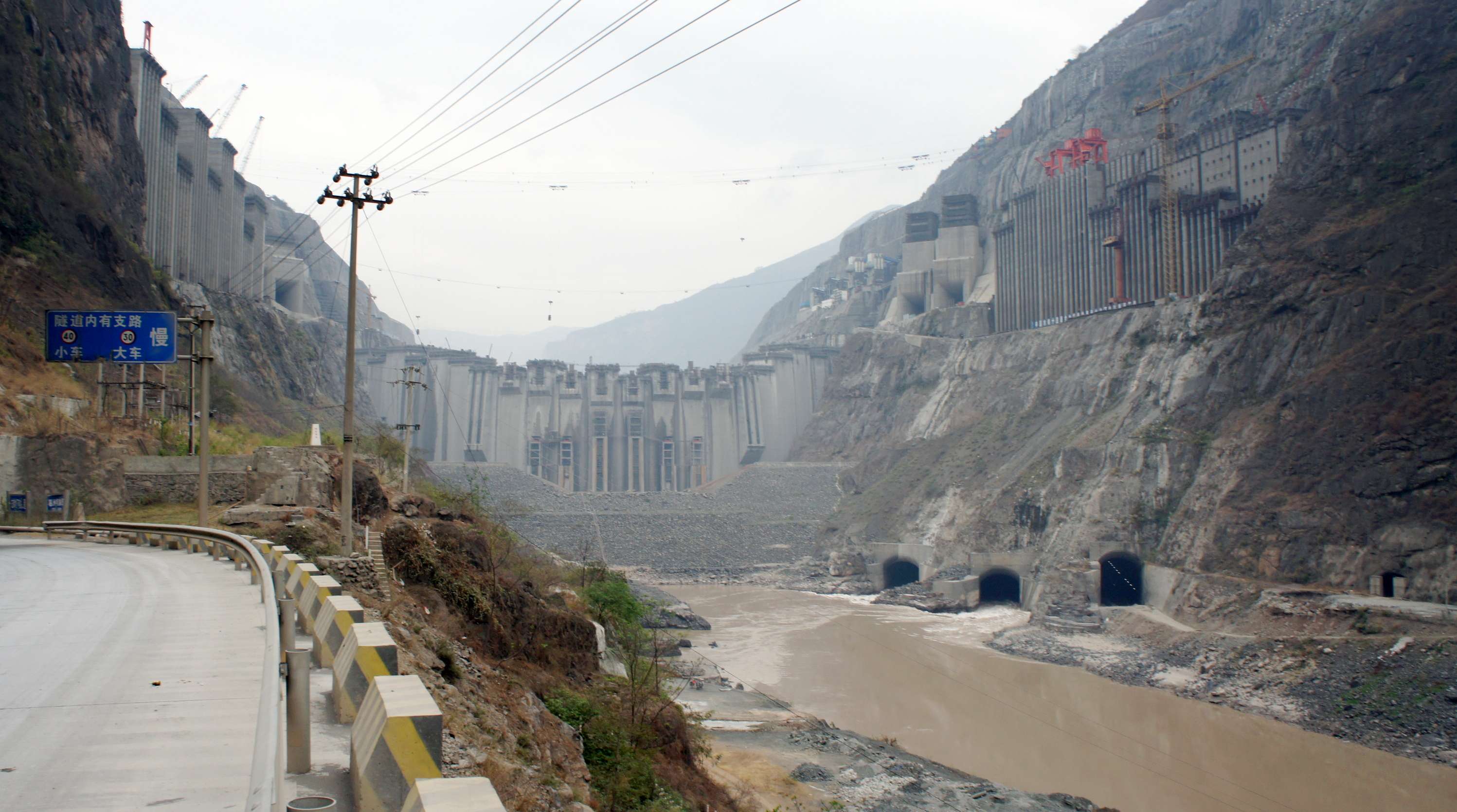 China has started construction of its biggest Suwalong hydropower project at the junction of Mangkam county in Tibet and Batang county in Sichuan province has a design capacity of 1.2 gigawatts and will be able to generate about 5,400 gigawatts hours of electricity a year when completed in 2021. The project costing over $3 billion will supply electricity to the economically well-off regions in the country’s eastern region.

China has overtaken the United States for the first time as the world’s biggest “acquiring nation” for mergers and acquisitions in the technology industry, accounting for a 45% share of the market in the first four months of this year…

It is hoped that the 18 billion Yuan ($3 billion) Suwalong dam, could pave the way for other projects in the headwaters of the adjacent Nu (Salween) and Lancang (Mekong) rivers to “fuel development” of hydropower in Tibet, Hong Kong-based South China.

China has overtaken the United States for the first time as the world’s biggest “acquiring nation” for mergers and acquisitions in the technology industry, accounting for a 45 per cent share of the market in the first four months of this year, according to a report from Dealogic.

It estimated that Chinese technology acquisitions reached a new high of $65.7 billion through 456 transactions, up from the previous record of $41.6 billion through 434 deals in the same period last year.

The design capacity of Suwalong dam is more than double that of the Zangmu hydropower plant on Brahmaputra River, which is Tibet’s largest existing hydro project.The Zangmu Dam is a gravity dam on the Brahmaputra River 9 km (5.6 mi) northwest of Gyaca in the Tibet Autonomous Region of China. The purpose of the dam is hydroelectric power production using run-of-the-river technology. It is part of the Zangmu Hydropower Project and supports a 510 MW power station. Construction began in 2009 and the first generator was commissioned in November 2014. The last became operational on 13 October 2015. It is the first dam on the Brahmaputra/Yarlung Zangbo River and has caused controversy in India.

As the Brahmaputra River flows into India and Bangladesh, China constructed the dam on the river against mild protests from India and Bangladesh. Reportedly, China had previously denied that they were constructing a dam on the Brahmaputra River, even after the contract was awarded. In April 2010, Yang Jiechi, their Foreign Minister, officially revealed that they were in fact constructing the Zangmu Dam on the river. China had assured India that the dam is “a small project which will not have any impact on the river’s downstream flow into North-East India.” Indian officials such as the Arunachal Pradesh Power Minister Jabron Gamlin expressed, “China’s constructing a dam is a cause of concern for the state, and it would affect people living downstream”.

The dam though was being “widely interpreted as a clear signal” that more dams on the river would be built in the future.

Reportedly, China had refused requests to reduce the height of the dam but the Indian Minister of External Affairs at the time, S. M. Krishna, had asserted that India was not concerned with the dam due to its run-of-the-river design. The dam though was being “widely interpreted as a clear signal” that more dams on the river would be built in the future. In January 2013 China approved three more dams on the river as part of its Twelfth Five Year Plan. The Dagu (640 MW) and Jiexu (560 MW) dams will be constructed upstream of Zangmu and the Jiacha Dam (320 MW) downstream.

The Brahmaputra originates in Tibet (where it is known locally as the Yarlung Tsangpo), and meanders across the Line of Actual Control (LAC) and into the Indian state of Arunachal Pradesh. This is one of two major contested regions along the Sino-Indian border, the other being Aksai Chin to the far west (where most of the Chinese military incursions take place). Chinese troops conducted a major offensive in Arunachal Pradesh as part of a border conflict with India in 1962, before withdrawing pending negotiations. Beijing claims sovereignty over this territory, which it refers to as “southern Tibet,” while New Delhi regards it as rightfully India’s territory under a 1914 treaty. The river then continues through Indian Territory and into Bangladesh, where it ultimately flows into the Bay of Bengal.

Among the world’s major international rivers, the Brahmaputra ranks low in terms of institutionalised management. Countries along the Nile, for instance, have formed the Nile Basin Initiative to encourage peace and security, while states in the lower Mekong region have formed the Mekong River Commission (of which China is an observer, but not a full member). By contrast, there is no institution capable of promoting cooperation between the Brahmaputra’s three major riparian states – China, India, and Bangladesh. Even at a bilateral level, China-India cooperation is limited to a modest river data sharing agreement and a joint working group that has apparently not met regularly. The prospects for a larger accord (such as a water sharing treaty) are frustrated by the fact that the river passes through contested territory.

Chinese officials have frequently reiterated that China is building only “run-of-the-river” dams on the Yarlung, with no ability to impound or divert water. Yet in the context of the unending border dispute and low Sino-Indian strategic trust, many in India remain unconvinced of China’s intentions.

From a security perspective, there are three major challenges for Beijing and New Delhi. These are discussed at length in a new CNA study authored by Joel Wuthow, Satu Limaye and Nilanthi Samaranayake that assess the views and policies of all three riparian’s. First is the challenge of flood control and prevention. In June 2000, a natural dam on the Chinese-controlled side of the Brahmaputra broke free, leading to a massive flood in Arunachal Pradesh. Thirty Indian nationals were killed, and fifty thousand displaced from their homes. Indian authorities charged that China had withheld vital information that could have improved flood forecasts. This led to a 2002 agreement by which China supplies river flow data to India during flood season (roughly half the year). Yet flooding remains a concern, and may worsen over the long term with the melting of Tibetan glaciers as a result of global warming.

Second are Indian concerns that China might build dams capable of diverting the Yarlung Tsangpo away from India. These concerns have circulated in India for years, most notably in Brahma Chellaney writings on the coming Sino-Indian “water wars”. In fact, Chinese academics have considered a variety of river diversion plans focused on alleviating domestic water shortages, including one by a former PLA officer titled Tibet’s Waters Can Save China that received much domestic and international attention. However, other Chinese experts contend that the costs are far too high and the engineering challenges too complex to undertake this feat, and instead argue that there are other, better ways to solve domestic water shortages (such as increasing agricultural efficiency). Moreover, Chinese officials have frequently reiterated that China is building only “run-of-the-river” dams on the Yarlung, with no ability to impound or divert water. Yet in the context of the unending border dispute and low Sino-Indian strategic trust, many in India remain unconvinced of China’s intentions.

Third, Chinese observers are concerned about the ramifications of planned Indian hydropower and other infrastructure development along the Brahmaputra in Arunachal Pradesh. The fear is that this development will strengthen India’s “actual control” over the region by facilitating a large influx of Indian migrants into the contested territory. This would further complicate border negotiations and make it harder for Beijing to ever regain southern Tibet. China has even taken steps to try to complicate Indian development in Arunachal by seeking to deny international financing for these types of projects. Interviews with Chinese experts suggest that Beijing does not have much hope of being able to forever forestall India’s progress in this arena, though the projects themselves will probably continue to be an irritant in broader Sino-Indian political relations.

China and India could work closely to address the risks of flooding. For instance, the two militaries might organize combined exercises based on a flooding scenario.

Taken together, the Brahmaputra presents a mix of challenges that could further aggravate tensions. It is not difficult to imagine a scenario in which control over the river becomes bound up with a larger border conflict. Water, after all, is a strategic resource and vital to sustaining military forces in the region. Yet there are also several ways in which the two sides can work together to stabilize the LAC region by jointly addressing river issues.

At a minimum, China and India could work closely to address the risks of flooding. For instance, the two militaries might organize combined exercises based on a flooding scenario. This could build on a recent precedent of combined China-India military drills in the border region focused on disaster relief. Chinese and Indian civilian ministries might also join forces to discuss how flood control measures in the region might be strengthened, and exchange information on other topics of mutual concern, such as river safety and pollution mitigation. Although this type of cooperation will not resolve underlying tensions related to the border dispute, it could build trust at a low level and strengthen both sides’ capacity to respond to emergencies.

Another step would involve greater information sharing regarding dam building and other infrastructure development on both sides of the LAC. China, for instance, might consider allowing Indian officials to conduct site visits to the Zangmu dam, which became fully operational in October 2015. China might also provide more details on planned additional dams, to respond to Indian concerns about ulterior motives. Yet China should not be expected to provide such information unilaterally.

At a basin-wide level, China and India should consider working together with their downstream neighbor, Bangladesh, to institutionalize cooperation.

New Delhi should reciprocate by fulfilling its agreement to provide China with information on its monitoring site on the Brahmaputra and clarify the number and types of dams it is building downstream. The best-case scenario would involve the two governments exploring joint development, which might build on the recently established Trans-Himalayan Development Forum.

At a basin-wide level, China and India should consider working together with their downstream neighbor, Bangladesh, to institutionalize cooperation. This would be a challenge, and require Beijing and New Delhi to overcome their preference for bilateral diplomacy regarding trans boundary river issues. In the short term, multilateral engagement might cover such “low-hanging fruit” as pollution control and disaster relief.

Over the longer term, the three states might consider forming a Brahmaputra Basin Commission on the model of the Mekong River Commission to facilitate information sharing and joint activities, such as combating transnational crime. Given tensions between all three countries (including between India and Bangladesh), such cooperation will not be easy. But, if successful, it could provide a basis for multilateral cooperation in a way that is currently sorely missing.