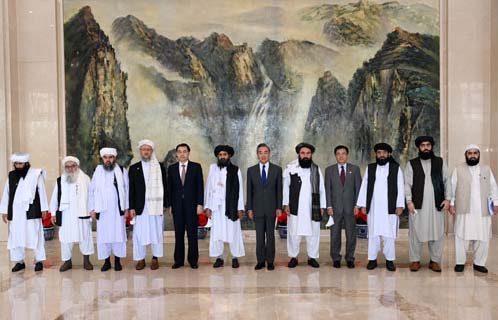 As the United States withdraws from Afghanistan and leaves a security vacuum there, is China moving in by cozying up to the Taliban? On July 28, Chinese State Councilor and Foreign Minister Wang Yi held a high profile official meeting with a delegation of nine Afghan Taliban representatives, including the group’s co-founder and deputy leader Mullah Abdul Ghani Baradar. Most notably, Wang used the meeting to publicly recognise the Taliban as a legitimate political force in Afghanistan.

There are also questions about how moderate the Taliban will ever be, which has a tremendous impact on Chinese officials’ perception of, and policy toward, the organization. Additionally, despite the narrative that Afghanistan could play an important role in the Belt and Road Initiative (BRI) as well as in regional economic integration, economics is not yet an incentive for China to lunge into the war-plagued country. China has been burned badly in its previous investments in Afghanistan and will tread carefully in the future. In an effort to further its political and economic interests, the Chinese government has reluctantly embraced the Taliban.

In 1993, four years after the Soviet Union had withdrawn its last troops from Afghanistan and one year after the Afghan communist regime had collapsed, China evacuated its embassy there amid the violent struggle then taking place. After the Taliban seized power in 1996, the Chinese government never established an official relationship with that regime. The Taliban’s fundamentalist nature, their association with and harbouring of al-Qaeda, and their questionable relationship with Uighur militants all led Chinese officials to view them negatively.

China’s keen and active engagement with the Taliban reveals Beijing’s deepening perception of the group’s critical role in Afghanistan after the U.S. troop withdrawal. During his meeting with Baradar last month, Wang publicly described the Taliban as “a crucial military and political force in Afghanistan that is expected to play an important role in the peace, reconciliation, and reconstruction process of the country.” This was the first time that any Chinese official publicly recognized the Taliban as a legitimate political force in Afghanistan, a significant gesture that will boost the group’s domestic and international standing. As Chinese officials battle a reputation for cozying up to the Afghan Taliban — designated a terrorist organization by Canada, Russia, and others — it is important for them to justify the rationale for their engagement.

Wang did not forget to dismiss Washington in the meeting with the Taliban: He emphasized “the failed US policy on Afghanistan” and encouraged the Afghan people to stabilize and develop their country without foreign interference. Although the United States was not the focus of the meeting, Chinese officials did draw a contrast between what they consider America’s selective approach to Afghan politics and China’s “benevolent” role by virtue of its self-proclaimed noninterference principle and amicable approach to all political forces in Afghanistan.

In anticipation of prolonged conflict in Afghanistan, Beijing is trying to strike a balance in its diplomacy toward the Afghan government and the Taliban. Chinese officials’ recent recognition of the Taliban as a legitimate political force is significant. However, the prospects for that relationship remain uncertain, as the Taliban’s future policies are unclear. China has the capacity to play a bigger role in the country economically, but a willingness to do so will only emerge when there are signs of sustainable stability. China has been weaving a net of bilateral, trilateral (China, Pakistan, and Afghanistan), and multilateral engagements to encourage that stability. If stability does not emerge in the foreseeable future, China most likely will avoid deep economic involvement in Afghanistan and will work with both the Afghan government and the Taliban to protect its interests on the ground.

The Taliban announced the formation of a hardline interim government for Afghanistan, filling top posts with veterans of the Islamist militant group who oversaw the 20-year fight against the US-led military coalition.

Wang called on the Taliban to crack down on terrorism and unite with ethnic groups in the country. He said Afghanistan’s regional neighbours, which include Pakistan, Iran, Tajikistan, Turkmenistan and Uzbekistan, should coordinate and cooperate with them to “build a broad and inclusive political structure, pursue moderate and prudent domestic and foreign policies, draw a clear line with terrorist forces,” according to Xinhua.

The Taliban called China a “good friend” and pledged to “never allow any forces to use the Afghan territory to engage in acts detrimental to China,” according to a statement from the Chinese Foreign Ministry on the meeting.“China is a very important and strong country in our neighborhood, and we have had very positive and good relations with China in the past,” Zabihullah Mujahid said. “We want to make these relations even stronger and want to improve the mutual trust level.”

China is eyeing on heavy Afghanistan wealth as it is sitting on deposits estimated to be worth $1 trillion or more, including what may be the world’s largest lithium reserves — if anyone can get them out of the ground.

China shares a 50-mile (80 kilometer) border with China’s western region of Xinjiang at the end of the narrow Wakhan Corridor and has substantial investment in the wider region.

Wang’s message focused on the demand that the Taliban “sever all ties with all terrorist organizations, including the East Turkestan Islamic Movement,” a Muslim separatist group founded by militant Uighurs. Although many have questioned the existence of the organization, and the Trump administration removed it from the US Terrorist Exclusion List last November, the presence of Uighur militants in Afghanistan and their political aspirations are real. This issue has been a priority for Chinese officials in their dealings with all political forces in Afghanistan. In fact, without the Taliban’s public promise in July not to harbour any group hostile to China, it is questionable whether Chinese officials would have issued such a high-profile recognition of the Taliban as a legitimate political force at all.