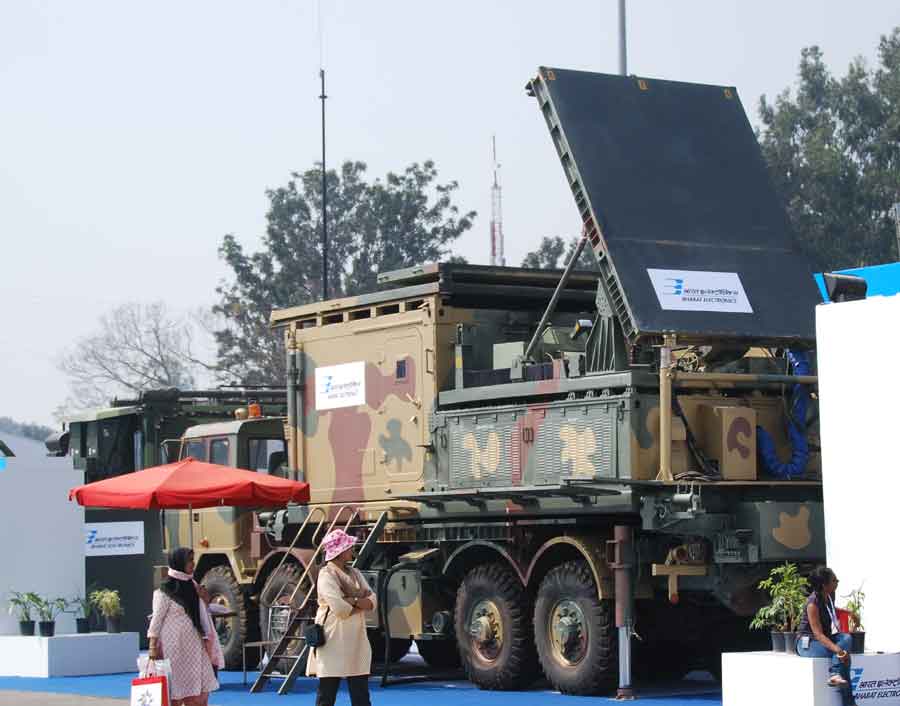 In recent years, Electronic Warfare (EW) has emerged as a “game changer” and “force multiplier” in providing a wholly new edge and a novel dimension to the ancient art of warfare.  Not surprisingly then, India is making all out efforts to catch up with the technological strides in EW systems, considered the future of the battle fields. To this end, a large sophisticated testing facility for qualifying the domestically designed and developed EW systems is planned to be set up by the Defence Research and Development Organisation (DRDO).

EW, involving the total dominance of electromagnetic spectrum, stands out as the future of the warfare. And India cannot afford to lag behind in the race to exploit EW to stay at the winning edge of the war.

The Hyderabad based Defence Electronics Research Laboratory (DLRL), a constituent of DRDO, will work out the modalities and strategies for the setting up of this first of its kind facility in the country. As pointed out by Dr. Satish Reddy, “scientific the national priorities for the coming years.” For long, a glaring lack of a well equipped, field or outdoor testing facility did prove a big hindrance in the qualification of home grown EW devices.

In all probability, the EW test range will be ready in a year’s time at a location in Kurnool district of Andhra Pradesh. This open air range for missile testing is expected to be spread over an area of more than 2,500-acres. Right at the moment, EW systems are being tested indoors. An outdoor testing facility will help cut the time required for qualifying EW devices. Dr. Reddy is of view that India has done reasonably well in designing and developing EW devices. But he wants the Indian academia, research entities and industrial enterprises to play a vastly enhanced role in boosting the prospects of technology development for EW devices. Incidentally, many of the critical components of EW including seekers and AESA (Active Electronically Scanned Array) radars are now being developed within the country. Development of indigenous seekers and radars is in highly advanced stage, probably we may not require import of those equipment in the next years” points out Reddy. The market size of EW devices in India is estimated at Rs.30,000-40,000-crore.

And as observed  by U K Revankar, former Director of the Bangalore based Defence Avionics Research Establishment (DARE) and currently President of AOC (Association of Old Crows) India  Chapter, the upcoming test facility  will drastically reduce the  time taken for testing and integration of EW systems on various platforms. ”Currently, in the absence of such a facility, testing is done in labs using simulators. The test range will be of great help as equipment tested will be fit for flying,” said Revankar.

He also revealed that originally it was planned to set up EW testing range at Chitradurga in Karnataka. The proposed test range will feature a range of land and airborne equipment that would be networked for the real time, simultaneous testing of the EW devices .As it is, EW systems happen to  be robust enough to identify a variety of threats including communications and radar threats. But one big concern centring round EW systems is that they become obsolete faster than the platforms into which they are embedded. The technological advances in EW systems is as rapid as it is stunning, remarked Revankar.

Make in India initiative of the Indian Prime Minister Narendra Modi is sought to be harnessed for making India self reliant in EW systems. In this context, Dr. Reddy observes, “All research activities are aimed at enhancing the Make in India movement launched by our Prime Minister .

The much awaited Defence Procurement Procedure (DPP) 2016 with a number of “game changing features” is expected to give a big boost to the indigenous development of EW systems. In particular, DPP 2016 would open up government funding for research in weapons development spearheaded by both the private and public sector industries in the country.

…there is no escaping from the ground reality that in the years ahead EW will play a vastly enhanced role in the battlefield scenario.

In US, the continued government funding for research and development by the industry has proved to be instrumental in the development of state of the art weapons systems. A vastly enhanced role for the Indian industrial set up in the defence research and production will contribute significantly to Indian military’s self reliance with particular reference to EW systems.

Defence industry experts are of the view that in addition to focusing on design, development and production of high end military systems, the DPP 2016 which is expected to be announced soon would provide “an unprecedented safety net to industry”.

EW, involving the total dominance of electromagnetic spectrum, stands out as the future of the warfare. And India cannot afford to lag behind in the race to exploit EW to stay at the winning edge of the war. For the Indian armed forces, mastering the next generation of EW technologies, could imply gaining tactical and strategic advantages, rapidly and efficiently, from the word go.

”The goal of EW is to control the electromagnetic spectrum through electronic attack and electronic support. EW aims to disrupt the flow of flow of information through deception, soft skill and hard kill in order to achieve objectives,” notes Air Marshal P P Reddy, Chief of Integrated Defence Staff to the Chairman, Chief of Staff  Committee of the Ministry of Defence.

In the ultimate analysis there is no escaping from the ground reality that in the years ahead EW will play a vastly enhanced role in the battlefield scenario. In the emerging EW scenario both the outer space and cyber space will play a crucial role in determining the outcome of a conflict or war.

The EW system is a force multiplier which needs a high level of secrecy for maintaining surprise against adversary’s action. In such a situation, it is essential that system design and architecture and development knowledge is generated within the country…

In particular satellites meant for communications, navigation, reconnaissance, signal intelligence and target acquisition would continue to drive the dynamics of EW. As such the efforts to deny the adversaries the access to satellite resources through a variety of methods including jamming would assume significance. Against this backdrop China is laying a greater stress on the role of satellites in supporting its warfare strategy.   Not surprisingly then China has initiated the process of creating a special space force to utilise the advances in space technology to boost its “strategic supremacy.”

Clearly and apparently, the expanding frontiers of EW draws heavily from the potentials of satellites, communications and information systems ,all of which facilitate the smooth integration of fighting platforms, command centres and defence forces spread thinly across  a vast geographical swath. All said and done, the current thrust is on developing EW battlefield devices that are software intensive and fault tolerant besides being lightweight and smart with novelties like anti jamming strategy taking a centre stage. According to a report from Strategy Analytics, as the nations realize the growing need to have a strong digital warfare capabilities, global spend on the more advanced  radio frequency  EW systems is seen to touch around US$ 9.3-billion by 2020.

The former Indian President and globally recognised space and defence scientist Dr. APJ Abdul Kalam had highlighted the need for India to build a strong domestic design and development base for EW systems.

“The EW system is a force multiplier which needs a high level of secrecy for maintaining surprise against adversary’s action. In such a situation, it is essential that system design and architecture and development knowledge is generated within the country and maintained as a closely guarded information by services”. The moral of the story is that self reliance alone can turn EW devices into winning tools in the battlefield of the future.