Ceasefire Violations: Is Pak Army trying to regain its confidence? 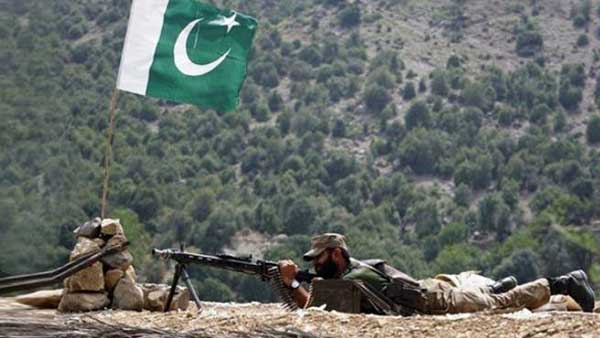 Pakistan!! Trying to figure out this nation is by far the most elusive challenge for a political or a military analyst! What makes this nation tick? How is it staying afloat given its multifarious problems? Is there any hope in the horizon or will it continue to hurtle down a tunnel of despair till it hits rock bottom and crashes due to its own weight? A lot of the problems emanate from the interference of the Pakistan army in the political and social landscape of the nation that professes to be a democracy.

The Pakistan army, in gross violation of all democratic norms, has humiliated its Prime Minister by launching unprecedented violence all along the border.

It is said that Pakistan army is synonymous with the state of Pakistan; unfortunately this perception has not changed even as the nation is going through its second consecutive democratically elected government. It is not as if the political establishment has not tried to break the shackles of the army; the misfortune of the political establishment is that it has allowed the army to beat it in its own game and on its own turf. The Khakis are better at politics than the politicians.

A good example of gross political opportunism by the army was seen during the ongoing political upheaval caused by the mass movements by Imran Khan and Tahirul Qadri. A few days back the Nawaz Sharif led democratic government was at its weakest with the protestors poised to overrun the red zone and attack the most significant bastions of democracy in Pakistan – the Constitution Avenue in Islamabad. At that critical stage the Pakistan Army, instead of standing steadfast behind its government, demanded “political space” in the affairs of the country. There are not many instances of such blatant exploitation of a constitutional crisis by an army even in the fledgling democracies of the world. In India, of course, such a situation would be unheard of. The incident lays bare the malevolent aspirations of the army and gives credence to the rumours that Tahirul Qadri is a stooge of the army fed into the political environment to serve its ends of weakening the elected government.

When Nawaz Sharif came to India on the invitation of Prime Minister Narendra Modi hopes were raised for a positive turn in relations between the two countries. Such hopes do not suit the Jihadi partners of the Pakistan army. The relevance and financial support of the fundamentalist forces depends on keeping the frontier with India (the line of control as well as the international border) heated up. Any kind of agreement with India would spell the doom of these forces. The Frankenstein monsters that the army has itself created and who are now literally controlling all of its actions and policy regarding Indian- specifically Kashmir laid out the plan to scuttle the peace process.

…need to augment the depleted terrorist cadre in the Kashmir valley for creating the required degree of mayhem during the forthcoming assembly elections.

It is for this reason that despite the Army’s preoccupation in a civil war like situation in North Waziristan and the political crisis enveloping Islamabad, it has joined hands with the Jihadis to play out a vicious game on the country’s borders with India in Jammu and Kashmir. The Pakistan army, in gross violation of all democratic norms, has humiliated its Prime Minister by launching unprecedented violence all along the border. It has engaged Indian troops and villages situated along the international border and line of control not only with small arms but also with heavy artillery.

Due to the incessant firing civilian population in the area has suffered loss of precious human life; loss of domestic animals and considerable damage to property. In many areas the people have been forced to leave their home and hearth and migrate to safer places.

Heating up of the frontier has been supplemented by many infiltration bids. There are a number of reasons behind this. First and foremost is the need to augment the depleted terrorist cadre in the Kashmir valley for creating the required degree of mayhem during the forthcoming assembly elections. Second, is the need to keep the momentum of infiltration going in order to justify the massive funding that comes by for the purpose. Third, the need to maintain the morale of the depleted terrorist cadre still operative in the valley by giving a message of action being in hand to turn the tide.

The tide, of course, cannot be turned anymore. Those who are being used as cannon fodder in this diabolic game are not aware of this fact, they simply think that they are going to Kashmir to liberate suppressed fellow Muslims and in the process earn a place in heaven. It is only when they look at death in the face that they realise that they have been duped! Such is the level of ignorance in Pakistan that there is no dearth of people who can be indoctrinated and be-fooled in this manner into giving their lives for a lost cause.

…the army will do everything possible to get back the social and political space that it lost under General Pervez Musharraf and General Kayani.

The proceedings in Pakistan put paid to the well publicized bonhomie that is said to exist between Nawaz Sharif and the Pakistan Army Chief, General Raheel Sharif. It is quite evident that the Army Chief will put the interests of his institution before his friendship and the army will do everything possible to get back the social and political space that it lost under General Pervez Musharraf and General Kayani.

The writing on the wall is very clear – in the emerging Pakistan it will be the Pakistan army that will lay down the foreign policy with respect to India and Afghanistan if not the US and the European Union also. The army will also decide on internal security and the functioning of NACTA and other so-called anti-terror and intelligence organisations of the country.

Nawaz Sharif will thus be reduced to a rubber stamp Prime Minister as has been the case in Pakistan during most of its existence as a separate nation. We are back to status quo ante.

The most critical question that rises is – how will the emerging scenario in Pakistan impact the social, political and security environment in India?

One thought on “Ceasefire Violations: Is Pak Army trying to regain its confidence?”