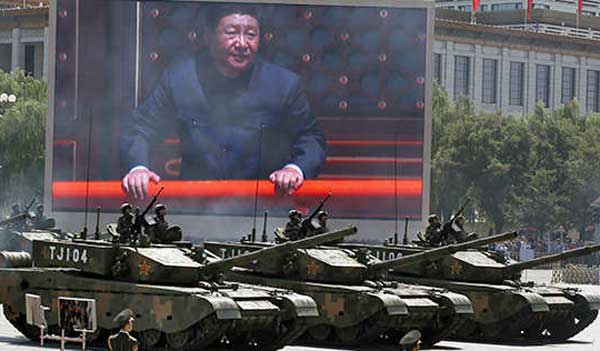 The 5th plenary of the 19th Central Committee of the Communist Party of China (CPC) held from October 26 to October 29 ran on expected lines. Attended by 198 members of the CPC Central Committee and 166 alternate members of the CPC Central Committee, the plenary adopted the CPC blueprint for the 14th Five-Year Plan (2021-2025) for National Economic and Social Development, and President Xi Jinping’s “Long-Range Objectives Through the Year 2035”. Mao Zedong died at the age of 82 and Xi Jinping will be 82 in 2035 but the speculation is that Xi will continue ruling till he is alive. There is speculation that given his deep interests in genetics he may succeed in retaining his present appearance and clone himself as the successor before departing from this planet.

Xi Jinping has accumulated total power unto himself as President of China, General Secretary of the CCP, Chairman of the Central Military Commission (CMC) and Commander-in-Chief of not only the Peoples Liberation Army (PLA), also taking control of all police forces. In 2018, Xi abolished the presidential term limits, eliminating the two-year time period restriction through a constitutional amendment, which will allow him to rule indefinitely. He has ruthlessly throttled dissent not only in the public but also in the CCP, military, government establishment and public with killings, disappearances and imprisonments. Therefore, there was little chance of any voices of dissent at the fifth plenary where Xi delivered a report on behalf of the Politburo of the Central Committee.

Talking about the future, the communiqué stressed taking into account the overall strategic plan for the great rejuvenation of the Chinese nation (read Xi’s China Dream) with major changes in the world that have not occurred in a century. It also focused on new characteristics and requirements because of changes in the evolution of the principal contradiction facing Chinese society, and new contradictions and challenges brought by the complex international environment. It also talked of the need for strengthening opportunities and risks and cultivating opportunities amid crisis.

Naturally, there was no mention of China releasing the Wuhan virus that has already killed 1.21 million and infected 47.3 million worldwide by October 30, 2020 and degraded economies of multiple countries. Aside from this, China’s achievements over the last five years include: aggression against India in Eastern Ladakh; increased genocide and human rights violations against Tibetans in Tibet and Uyghurs in Xinjiang; about turn on promise of ‘one country two systems’ in Hong Kong and ruthless suppression of Hong Kong’s democratic movement; economic intimidation against many countries; muscle flexing against Taiwan and western Pacific disregarding international laws and norms, and promoting terrorism in countries like India and Myanmar.

Notwithstanding what has been stated at the plenary, China’s economy would close at just two percent growth by end 2020 as per World Bank.  Faced with economic uncertainty and greater hostility from the world because of the Wuhan Virus, Xi Jinping’s strategy focused on the growth of domestic consumption and technological innovation to ward against diluting economic and trade relations with some other countries. In addition, Xi would go full throttle on the Belt and Road Initiative as witnessed in Myanmar. Approving new working rules of the Central Committee at the plenary has helped Xi accumulate more power and drive China for global domination in the manner he deems fit – overt, covert, unethical, whatever.

A US Senate Foreign Relations report released in July 2020 described how by assembling a multimodal biometric portrait of individuals, drawing on data such as DNA samples paired with facial recognition and then using omnipresent cameras and smart-phone apps, Chinese  authorities are able to sort its people into categories, track their movements and even take pre-emptive actions against those considered threats. The report concludes that this strategy was trialed and is now fully realized in Xinjiang as part of China’s cultural genocide of the Uyghur Muslims. Chinese citizens receive a numeric index of their trustworthiness and virtue, which determines opportunities individual citizens can be granted or denied. Significantly it is not just repression of Chinese population but Xi Jinping is pushing his Marxist-Leninist mode of governance to other countries like Nepal.

Even without the plenary, China’s comprehensive national power was expected to be on the ascent. Targeted implementation of the communiqué will further make it grow even faster. China has been focused on its economic growth and rise of military power under Xi as he perhaps foresees possible conflict with the US at a future date. The specific mention of integrating Taiwan with mainland China at the plenary may accelerate such conflict. In pursuance of the China Dream, Xi can be expected to act more demonic aiming for China’s world domination.

As for India, China has been eyeing Ladakh since the era of Mao Zedong and Xi Jinping has been planning, preparing and rehearsing the PLA for it since 2013-2014. China eyes Arunachal Pradesh and other Indian Territories plus Bhutan. China is assiduously working on posing multiple threats to India through countries in our immediate neighbourhood. Hence, Xi Jinping’s stance towards India will keep hardening especially since he views us in the American camp even though there is no formal India-US military pact. India, therefore, has no option but to build its comprehensive national power speedily.