Caucasus on the Boil Again – Battle of Nagorno-Karabakh

While the global community was glued to Eastern Ladakh and South China Sea as flash points that may endanger the global peace due to growing Chinese belligerence because of the dissension at home faced by the all-powerful Xi Jinping, another flash point has emerged in the Caucasus region. This region lies between the Black Sea and Caspian Sea mainly occupied by Armenia, Azerbaijan, Georgia and parts of southern Russia. The region is the life line of oil supply to the neighbouring countries with the major oil pipe lines passing through the area. It also serves as border between Asia and Europe.

On Sunday, 27th September 2020 a long simmering conflict in the south Caucasus once again burst into open clashes between Azerbaijan and Armenia. The cause of the ongoing battle which soon may erupt into an all-out war since both nations have declared martial law is the disputed enclave of Nagorno-Karabakh, the control of which was ceded to Armenia in 1994 after a bloody separatist conflict leading to large number of deaths and displacements. Universally, Nagorno-Karabakh is accepted as part of Azerbaijan. Both countries have been fighting each other since then at irregular intervals. The latest provocation dates back to July this year when Armenia killed a general and other officers of Azerbaijan’s military in a missile strike leading to a big uproar in Azerbaijan which swore to take the revenge soon. Azerbaijan was buoyed by the immediate Turkish offer to prepare for the response. 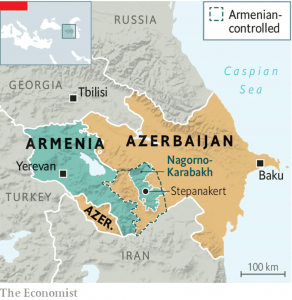 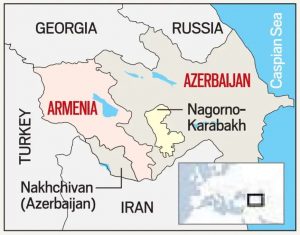 Long-simmering tensions between majority Christian Armenians seeking union with Armenia and mostly Muslim Azeris began boiling over as the Soviet Union began to disintegrate in its final years. USSR collapsed in 1991 and the republics became independent nations. In late 1991 majority Armenian inhabitants declared independence from Azerbaijan with Armenia’s support. It led to the emergence of the Republic of Artsakh, which to date remains unrecognised. The efforts of Azerbaijan to reimposeits authority led to a fight for ownership converting into the bloodiest war between the two neighbours. The war saw atrocities on both sides. A 1994 cease-fire left Armenian and Azerbaijani forces facing each other across a demilitarized zone, where clashes arefrequently reported. The region has since been under the control of Armenian forces, though it is still internationally recognised as part of Azerbaijan, as stated earlier. International mediation including UN resolutions have failed to resolve the crisis.

The new flash point has one thing in common to the other two and that is the expansionist ambitions of another ultra nationalist leader the Turkish President Recep Tayyip Erdogan who ever since his ascendancy to power has embroiled Turkey militarily in neighbouring countries like Iraq, Syria and Libya including tensions in Eastern Mediterranean. He is on the opposite side of Russia in both Syria and Libya leading to regional rivalry. Turkey is also pressing territorial claims in disputes with Greece and Cyprus thus creating an alarm among its NATO allies. Turkey has a powerful military which has also led Erdogan to view himself as the future leader of Muslim world displacing the traditional royal house of Saud like Xi Jinping who is dreaming to be the world leader replacing the US president. He is also preparing a non-Arab Muslim alliance with active connivance of Pakistan. Erdogan’s growing assertiveness in the region has changed its power dynamics.

While all other nations like India, China, USA, France, Iran and European Union have asked both countries to refrain from a full-fledged war and return to the negotiating table to resolve the issue through dialogue, Turkey and Pakistan have offered open support to Azerbaijan and egged it to carry on to liberate the disputed enclave from Armenian control. French President Macron has warned Turkey to refrain from sending Jihadists as mercenaries to the troubled area. It has also been reported that Pakistan has already sent Al Qaeda and Taliban jihadists to the area along with about one unit of regular soldiers. Pakistan known as the fountainhead of terror wants to convert this region into another epicentre of jihadist terror like Afghanistan. This has caused grave concern since the area has the potential of turning into a religious conflict between the Muslims and the Christians. The majority jihadists being Sunnis are willing to fight alongside the Shiite Azeris against Armenians because they consider it as jihad, a holy war between the Muslims and the Christians. While Vatican has also called for restraint both Pakistan and Turkey are encouraging Azerbaijan to continue the fight and expressed their solidarity towards Muslim brotherhood. Pakistan is also keen to develop the area into another zone of Muslim liberation like the Palestine and Kashmir. Does this have the covert support of China is not yet clear but both Turkey and Pakistan enjoy good relations with each other.

Geo politics of the region is very complicated. Turkey and Pakistan have military alliances with Azerbaijan, while Armenia has a similar treaty with Russia which has a military base in Armenia. Russia also enjoys good relations with Azerbaijan and is its major arms supplier. Russia, France and USA jointly chair the Minsk Group, which was founded in 1992 by the Conference on Security and Cooperation in Europe now known as Organization for Security and Cooperation in Europe (OSCE) to try to find a peaceful solution to the Nagorno-Karabakh conflict.All the three nations enjoy close relations with Armenia. Turkey being an important member of the NATO, an imminent crack has appeared with France and USA inclined towards Armenia. Armenia has also responded to the peace call by the Minsk Group but Azerbaijan’s response is not yet known. Israel is a major arms supplier to Azerbaijan but with Turkey openly supporting Azerbaijan and its newly formed good relations with Muslim nations in the Middle East, it has put Israel in a Catch 22 situation. Iranshares borders with both and is also friendly with both the nations but in case of a religious war it would have to decide to support Azerbaijan or stay neutral. With global terror outfits moving into the area and more Muslim countries backing Azerbaijan the situation is getting polarised. India also has a stake in the region. The North-South Corridor linking Mumbai to Moscow via Chabahar passes through Azerbaijan. India will not like the region to become another jihadist terror hub.

Azerbaijan is reported to have initiated the current clashes with full support of Turkey.  The fear is that Azerbaijan is now bent on taking back the entire enclave sensing it as a best opportunity to undo the wrongs of 1990-1994. This is a more serious escalation, much better prepared, with more troops, and happening simultaneously on all parts of the front line. In addition to heavy weaponry and infantry, helicopters and drones are being employed extensively. The clashes threaten to spill over into civilian areas. Outright war could put key pipelines at risk. Armenia has termed it as an existential threat nothing less than a struggle for survival and linked it to 1915 Armenian genocide by the Ottoman Empire especially in wake of the Turkey’s unequivocal support for Azerbaijan. Thus, both sides appear to be uncompromising though Armenia has responded to the call of the Minsk Group.

Any direct involvement by Turkey will push Russia also into the war. France has already warned Turkey. Armenia fears a direct assault through Nakhichevan, a part of Azerbaijan inside the Armenian territory. Any direct attack on Armenian territory would invoke its defence pact with Russia and draw the same into the conflict. In case of Muslim versus Christian war many more countries including the EU are likely to join splitting the NATO. This would have repercussions beyond the region as well. If China decides to join its friends Pakistan and Turkey, it well may lead to the Third World War. But with China tied down in a confrontation with India and US backed Taiwan, it is less likely.

The success of efforts of the UN and the Minsk Group to broker a ceasefire will to a large extent depend on the attitude of Erdogan. In any case, a ceasefire would only be a temporary solution with both sides unwilling for a compromise solution. The international community will have to wait anxiously and watch the happenings of next two –three weeks to determine if 2020 will end peacefully or not. The world peace is on the verge of destabilisation.