Capture of Hajipir Pass: A Saga of Guts and Glory 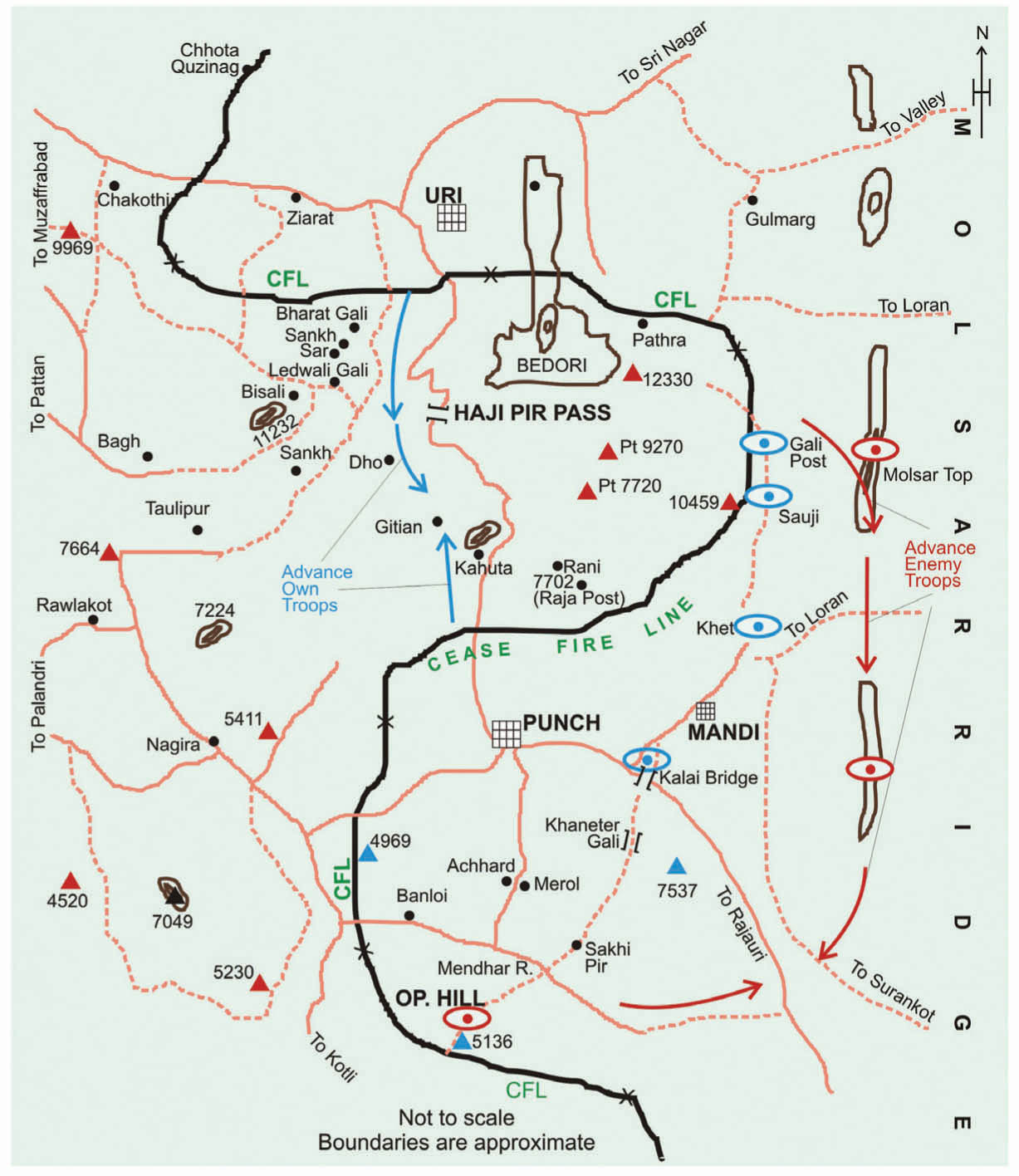 Much has been spoken and written about the capture of Hajipir Pass in Pakistan occupied Kashmir (PoK) during the 1965 Indo-Pak conflict and rightly so, because this was indeed a stupendous victory that taught Pakistan army a lesson on the grave consequences of daring to mess with Indian armed forces. Infact, the Pakistan army was so badly humiliated in this conflict that it was forced to change its narrative that this war being waged for “liberation” of Kashmir to an apologetic reasoning of it being necessitated for the “defence of Pakistan.”

The aim of Pakistan’s unprovoked aggression in 1965 was military dictator Gen Ayub Khan’s farfetched belief that the Pakistan army would be able “liberate” Kashmir by a three phased war plan. The initial stage included surreptitious infiltration of heavily armed soldiers into Kashmir disguised as ‘razakars’ (tribal volunteers). In the second phase, they would mingle with the locals and incite a resurrection by appealing to religious sentiments of the majority community. In the final phase, the infiltrators with help from locals would target Indian army posts and destroy defence installations and cut-off lines of communications, thereby forcing Indian army to leave Kashmir.

As Pakistan army’s stratagem envisaged use of local population to camouflage its military actions to give it an impression of a local uprising and not an unprovoked aggression, it was (from purely the theoretical point of view), a brilliant plan. The fact that it was named ‘Operation Gibraltar’ in reference to the Islamic conquest of Spain that commenced from Gibraltar in medieval ages, gives an insight into Pakistan’s utterly misplaced sense of optimism. But when executed, it turned out to be a dismal failure and also a grim reminder of Santayana’s famous aphorism that “Those who cannot remember the past are condemned to repeat it.”

Pakistan army’s war plan of 1965 was doomed to fail because it was in essence nothing but a shoddy ‘copy-paste’ of its earlier abortive attempt to annex Kashmir through a similar military action in 1947 that was codenamed ‘Operation Gulmarg’. The only variation between the two was that while Pakistan army used the ‘tribal invasion’ ploy to conceal its 1947 involvement in Kashmir, in 1965, it unsuccessfully tried to disguise its military adventurism by trying to pass it off as a local uprising.

But while evolving its 1947 and 1965 war plan to annex Kashmir, Pakistan army made two humongous mistakes. One, it grossly overestimated the capability of its ragtag band of ‘tribal volunteers’ and its own soldiers (which is evident from its inability to overwhelm the courage and tenacity of the Indian army, both in 1947 as well as 1965); two, it went completely wrong by underestimating the nationalistic feelings of Kashmiris and the proof of this is evident from the refusal of locals to cooperate with the so-called ‘tribals’ in 1947 and ‘razakars’ in 1965 by revolting against their own motherland.

Since Hajipir Pass was the main route of infiltration that was being used by Pakistan army to send its soldiers into Kashmir, Indian army decided to capture it to block ingress. Located at an imposing altitude of more than 8,500 feet, this Pass as well as the approaches leading to it were very well guarded by Pakistan army units. Therefore, while the capture of this formidable Pass is in itself is an undoubtedly momentous military victory, this phenomenal achievement also bears testimony to Indian army’s indomitable courage and exemplary tenacity, which on this occasion was aptly displayed by First Battalion, The Parachute Regiment (Punjab).

Commonly referred to as 1 Para, this battalion was part of 68 Infantry Brigade and was tasked to capture the forward enemy positions of Hajipir defences at Sank, Sawan Pathri and Lediwali Gali. Once these enemy positions were captured, another battalion would use the area secured by 1 Para to attack and capture Hajipir Pass. During war, while defenders are static and enjoy protection of field fortifications, the attackers have to perforce move in the open in order to close-in and physically kill and evict the defender. Hence, troops in attacking role are much more vulnerable than the defenders and this is why they usually suffer more casualties than the latter.

The initial attack of 1 Para on Sank during the intervening night of 25/26 August was unsuccessful and resulted in 18 casualties. But rather than being demoralised, this reverse further reinforced the battalion’s determination to avenge its fallen comrades and so the very next night, 1 Para attacked Sank with such fury that convinced of complete annihilation, the enemy wisely chose to retreat. Giving the enemy no respite, the daredevils of 1 Para pressed on their attacks with full fury and captured both Sawan Pathri and Lediwali Gali.

After two nights of heavy fighting, 1 Para had achieved the task assigned and as per the plans the exhausted rank and file of this battalion could well have rested on their laurels by staying put at the positions that had been captured. But, since enemy positions at Rustam and Badori were still holding out despite being attacked four times by other units, Major (later Lt Gen) Ranjit Singh Dayal, second-in-command of 1 Para volunteered to lead his troops and capture Hajipir Pass.

With nothing but shakarparas (a food preparation made by frying sweetened wheat dough pieces in oil) and biscuits to sustain themselves, 1 Para moved speedily along Hyderabad nullah, but they were spotted and fired upon by the enemy. Yet, as the old saying goes that ‘fortune favours the brave’, help came to Major Dayal’s column from two rather unexpected quarters- nature and the enemy!

While an unexpected heavy shower obscured observation and hence rendered enemy firing on Maj Dayal’s column ineffective, during its approach march to Hajipir Pass, 1 Para came across a hut full of Pakistani soldiers. After disarming these soldiers, 1 Para ‘gainfully’ used them to ferry their battle loads uphill and this considerably speeded up their advance.

Needless to say, the sudden appearance of Indian soldiers took the enemy guarding Hajipir Pass by complete surprise and after a brief fight the enemy fled the scene in complete disorder. What is even more commendable is that the rank and file of 1 Para had pressed on continuously for three days, moving uphill across country under enemy fire and fighting him without any meaningful rest or proper food. 1 Para displayed nerves of steel and was rewarded by the honour of unfurling the Tri-colour over Hajipir Pass- a defensive position which was considered so impregnable that the Pakistan army even refused to acknowledge its loss till journalists visited the site and nailed Pakistan army’s lie!

Tailpiece: India may have handed over Hajipir Pass to Pakistan under the Tashkent Agreement, but the Battle of Hajipir Pass shall continue to serve as a source of inspiration for the Indian army and so, on the 55th anniversary of the capture of Hajipir Pass, let’s salute all those who fought and fell there!

Editors Remarks: Unfortunately, the Indian Government could not stand up to the pressures by the global powers (for their own vested interests) and returned Hajipir Pass to Pakistan. India also returned the Bugina Bulge that was also captured (it lay between the crest of the Shamshabari Range and Kishan Ganga River north of Tangdhar) in North Kashmir. Both these areas have been the most favoured areas by the terrorists from POK for infiltration into Kashmir Valley.

One thought on “Capture of Hajipir Pass: A Saga of Guts and Glory”