Home  >  News  > Geopolitics  >  Can Quad be Effective against Incremental Encroachment of China in Indo-Pacific Region?

Can Quad be Effective against Incremental Encroachment of China in Indo-Pacific Region? 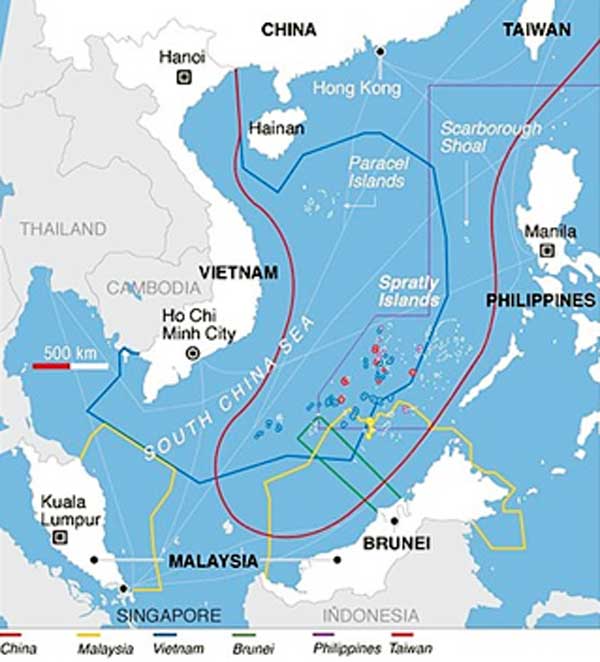 •  Chinese adventurism in South China Sea and expeditionary design in Indo-Pacific is a global concern.

•  Quad being looked at as one of the instruments for ensuring free and open, rule-based Indo-Pacific.

•  Quad needs teeth to effective in such expected role, along with other global efforts.

Quad may not have requisite teeth as of now, but there is no other alternative but to have potential arrangement of this kind between like-minded maritime powers…

The ‘Incremental Encroachment Strategy’ of China exhibited in South China Sea (SCS) is a serious concern not only to the countries directly affected by losing their influence  over overlapping EEZ, but also to rest of the world as China can exert illegitimate monopoly over SCS global Sea Lane of Communication (SLOC).  The countries directly affected do not have adequate muscle power to stand up to China; hence will have no choice but to succumb to one sided arrangement like China driven “Code of Conduct” (CoC).  Chinese adventurism therefore needs to be checked by other prominent maritime powers in global interest.

The Quadrilateral Security Dialogue (Quad) which groups Australia, India, Japan, and the United States is often being looked at as a potential instrument to check further adventurism of china in Indo-Pacific, however it currently does not have requisite teeth and traction.  The fact that China could convert features into military base in SCS despite presence of US Navy indicates that it does require global condemnation and effort of higher order to ensure that SCS does not become ‘China’s Lake’.

Although Quad may not have requisite teeth as of now, but there is no other alternative but to have potential arrangement of this kind between like-minded maritime powers having common strategic interests in Indo-Pacific Region in relation to freedom of navigation (FON), flights and rule-based order.

Differing Perceptions regarding Role of Quad

The Quad has repeatedly been subject of varying perceptions regarding its role, viability and prospects. Quad by nomenclature is a security dialogue forum and not a military alliance; hence the expectations from Quad have to be appropriately restricted for the time being.  Media often traces the Quad back to the expanded Malabar Naval Exercise in September 2007, that originated from the U.S.-India bilateral relationship, wherein ships of all four Quad countries participated for the first time, which was held off the Japanese island of Okinawa.

It appeared to be a military and maritime arrangement revolving exclusively around four democracies. The initial impetus/use fullness of Quad it in fact emerged following the devastating tsunami in Indian Ocean back in 2004 as the so-called Tsunami Core Group, which came together to fashion a credible Humanitarian Assistance and Disaster Relief (HADR) response to it. This role for Quad, along with anti-piracy was noticed and counted, as such a role was much easier to sell to the world community including the stakeholders, which were excluded in the grouping.

Quad is yet to acknowledge that it has a role to check the adventurism of China in Indo-Pacific region and could ever operate jointly as a military force for it.

Many give the credit of the idea of Quad to Prime Minister Abe who mooted his proposal within the framework of the “confluence of the two seas”, joining the Indian and the Pacific Oceans. This would enable a “broader Asia” to emerge, which would encompass the Pacific, where Japan felt that partnership with the US and Australia would be integrated into its ambit besides Japan – India strategic partnership.

The four democratic countries of the Quad project themselves to be committed to an open and transparent network which “will allow people, goods, capital, and knowledge to flow freely”. Quad is therefore yet to acknowledge that it has a role to check the adventurism of China in Indo-Pacific region and could ever operate jointly as a military force for it. In fact, Quad has chosen to be diplomatically correct to say that it is not directed towards any particular country.

To take the dialogue forward, the Quad needs to urgently converge existing divergences regarding their individual definitions of the Indo-Pacific. While Indian and to some extent Japanese focus would be to include western Indian Ocean touching Africa and Gulf countries along with the Eastern Indian Ocean, Northern and Eastern Pacific, which perhaps other members of Quad would see as the main focus of attention.

All Quad members have different threat perceptions in the Indo-Pacific. This impacts their prioritization in dealing with challenges in Indo-pacific as well as the areas of focus. It also includes their approach towards dealing with flash points like SCS or upholding the freedom of navigation along the sea and air routes of communication, connectivity and rule-based order in the Indo-Pacific.

An important issue for effective maritime security cooperation amongst the navies of Quad is while three of the navies (Australia, US and Japan) operate within NATO military alliance framework, India is not part of any military alliance, although a strategic partner of two of them. The trilateral dialogue between the three NATO allies is continuing since 2002 without India.

India is the only country amongst Quad members which has unsettled land border with China; hence will have a different approach in dealing with China.

India is the only country amongst Quad members which has unsettled land border with China; hence will have a different approach in dealing with China. This does create some apprehension in mind of the rest three partners as China -India relations keep fluctuating between tension and harmony with incidents like Doklam, Wuhan and reorganization of Jammu and Kashmir. This brings up the question of military decision-making by the Quad as a group.

The centrality of ASEAN in the Indo-Pacific has been emphasized by the Quad, hence their inclusion into it is another debatable issue, due to Chinese influence over them. There are differences within ASEAN in response to Chinese claim over nine dash line in SCS (based on its unilateral interpretation of history), between the countries which have overlapping EEZ and the ones not facing such problem.

Generally, some of the affected ASEAN countries have occasionally raised a feeble voice against Chinese aggression (Philippines, Vietnam), expecting world powers to check Chinese adventurism, without themselves standing up against the Chinese might. They have generally tried to get the best of US and China without being seen to be taking sides. This has emboldened China to continue incremental encroachment in SCS and the region up to a point that it has become a global concern.

China has also tried its best to deal with each of the country in this region on bilateral terms and lure/influence it through ‘Cheque book/Purse/Infrastructure diplomacy’.

It is being increasingly realized that equal participation of all four Quad countries in maritime security cooperation is crucial for a ‘Free and Open Indo-Pacific region’. Between 2007 to 2017, meetings of Quad officials were extremely limited, that too at Joint Secretary/equivalent level. 2017 onwards it had four meetings, the last one being at Foreign Minister level, indicates the incremental seriousness of the countries involved in such engagement.

It is still not sure that any legal framework can compel China to accept it in SCS in future, as it had rejected the PCA’s decision earlier.

Increasing convergence in focus and roles is also being noticed. In last meeting hosted by US earlier this year ,besides ‘Free and Open Indo-Pacific’ to ensure freedom of navigation; maritime security cooperation; connectivity; good governance; countering terrorism and proliferation; HADR; promoting a rules-based order in the Indo-Pacific; and cyber security were some common areas of interest. Concerns like use of global commons in international water and nuclear adventurism of North Korea were also subjects of discussion. Consensus on centrality of ASEAN was also a sign of convergence.

The common focus of Quad to implement its idea of a Free and Open Indo-Pacific on a “rules-based” legal framework to secure freedom of navigation in the global SLOC in Indo-Pacific needs some introspection and strengthening. Three members of Quad namely Australia, India and Japan, have ratified the United Nations Convention on the Law of the Sea (UNCLOSIII), however US is yet to ratify the same. This ratification will be necessary to have a moral high ground to implement the same.

It is still not sure that any legal framework can compel China to accept it in SCS in future, as it had rejected the PCA’s decision earlier. This is a serious global concern because China continues to make/improve infrastructure in SCS, with a view to convert features/atolls into military bases, expect others to accept them as islands and apply ‘Baseline principle’ under UNCLOS-III to claim its 200 nautical miles of EEZ to conveniently convert SCS into ‘Chinese lake’ over a period of time. If it is not resented by global community, it may lead to some restrictions like ADIZ on SCS which is a global SLOC.

Considering the prevailing international strategic scenario, China is reasonably confident that US or any other country will not use military force to dismantle their infrastructure made in SCS. It is also increasing its naval capability as part of its comprehensive national power (CNP) to make best use of inaction by other countries in Indo-Pacific.

In this context it is necessary that Quad strengthens itself beyond Malabar exercises and forum for dialogue and gets some teeth in the form of maritime capacity building of its members, further improvement of interoperability and dominate choke points sensitive to China. Chinese adventurism of recent intrusion like Vanguard episode in Vietnam waters need to be taken seriously.

If the strategic situation worsens there may be a need to position ‘UN Maritime Military Observers Group’ in future, as prevention of accidental triggering of conflict is possible in a region having high density of combat ship on FON missions.

Quad members must continue freedom of navigation exercises and military posturing in Indo-Pacific as China continues to do so. Global community must continue to condemn Chinese encroachment in SCS and conversion of features into bases. These features should never be recognized as islands in consonance with PCA decision. If the strategic situation worsens there may be a need to position ‘UN Maritime Military Observers Group’ in future, which must be thought of, as prevention of accidental triggering of conflict is possible in a region having high density of combat ship on FON missions.

Some of the countries whose EEZ is being compromised by Nine dash line claims must start speaking for themselves before expecting other powers to help them. The countries who have their SLOC passing through Indo-pacific should also be consulted in finalization of China driven Code of Conduct (CoC) as they also have stakes in SCS. Any action by any country to restrict freedom of navigation/flight or violation of rule of law must be challenged in UN Security Council.

Support of other navies like France for free and open Indo-Pacific is encouraging step in this direction. Quad in its present form may not be effective enough to check Chinese adventurism, but it certainly has potential to become one of the effective instruments to do so, provided the affected countries and the global community also plays its role against common concerns.

One thought on “Can Quad be Effective against Incremental Encroachment of China in Indo-Pacific Region?”