Can China afford a war? 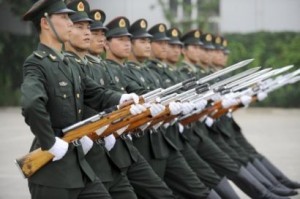 James Clapper, the Director of the US National Intelligence recently told a Senate Committee on intelligence that the Indian Army was strengthening itself for a “˜limited conflict with China: “Despite public statements intended to downplay tensions between India and China, we judge that India is increasingly concerned about Chinas posture along their disputed border and Beijings perceived aggressive posture in the Indian Ocean and Asia-Pacific region.”

He however added: “The Indian Army believes a major Sino-Indian conflict is not imminent.”

Is this announcement part of a US plan to rope in India in a larger containment plan? Probably!

It is true that Beijing has, in the recent months, shown a renewed aggressiveness in its dealing with Delhi.

A Report Sustaining U.S. Global Leadership: Priorities for 21st Century Defense recently released by President Obama, speaks of the “maintenance of peace, stability, the free flow of commerce, and of U.S. influence in this dynamic region will depend in part on an underlying balance of military capability and presence. Over the long term, Chinas emergence as a regional power will have the potential to affect the U.S. economy and our security in a variety of ways.”

Washington needs Delhi on board to counter Beijing and continue its business as usual.

When Clapper warns: “Beijing may take actions contrary to that goal [of peaceful rise] if it perceives that China’s sovereignty or national security is being seriously challenged,” he clearly sends Delhi a message that India will have to be in the front line.

The situation has never been so bad in Tibet. Hundreds of Tibetan pilgrims, returning to Tibet after attending the Kalachakra initiation conducted by the Dalai Lama in Bodh Gaya, were arrested by Chinese authorities and forcibly taken to undisclosed locations.

But a “˜limited conflict means nothing! What is a “˜limited conflict? Who is deciding on the “˜limitations? First, it is doubtful whether President Hu Jintao and the outgoing leadership in Beijing would have the determination to embark on any type of conflict with India during the last months of their tenure, and more importantly a 1962-type conflict would have little chances to remain limited. Just to give an example, the Air Force was not used in 1962; it would extensively be used in a war today.

It is however true that Beijing has, in the recent months, shown a renewed aggressiveness in its dealing with Delhi.

The 15th Round of talks, which was scheduled on November 28-29, 2011, was cancelled by the Chinese were unhappy with the Dalai Lamas participation in the Global Buddhist Congregation happening in Delhi at the same time. Beijing even insisted on the cancellation of the Conference. This was obviously not acceptable to South Block.

In the meantime, the intrusions into Indian territory continued unabated. Quoting from a classified document, the weekly magazine India Today affirmed: “During the month [November 2011], there were 20 incidents of LAC violations by the Chinese. During the current year, 323 transgressions were reported: western sector 194, middle sector-9 and eastern sector-120. In the corresponding period of 2010 there were 324 intrusions: 224 in the western sector, 111 in the middle and 90 in the eastern sector in Arunachal.”

Before his arrival in India, Dai Bingguo, Chinas Special Representative, affirmed that the relations between the two countries had embarked in a “˜golden era; during the meeting however, Dai told Shivshankar Menon, his Indian counterpart, that India had to first discuss the Eastern Sector of the boundary and he further asked Menon how much territory New Delhi would be ready to part with in the Tawang region.

At that time, Beijing did not say that the Dalai Lama and his entourage were in …Southern Tibet (the term used today by Beijing to define Tawang). They knew perfectly well that the Tibetan leader had taken refuge on Indian territory.

Beijing may insist that Tawang district is part of the Peoples Republic of China, but it is clearly an after-thought.

I recently came across a series of rare old photos of the Dalai Lama fleeing Tibet. The Dalai Lama entered India on March 31, 1959 crossing the Indian border at Khenzimane at the bottom of the famous Thagla ridge in the West Kameng Frontier Division of the North-East Frontier Agency (today, Tawang District).

Jawaharlal Nehru sent PN Menon, a senior officer of the Ministry of External Affairs, (and incidentally, the father of the present National Security Adviser) to receive the Tibetan leader. Menon delivered to the Tibetan leader a message from the Prime Minister: “My colleagues and I welcome you and send greetings on your safe arrival in India. We shall be happy to afford the necessary facilities to you, your family and entourage to reside in India. The people of India, who hold you in great veneration, will no doubt accord their traditional respect to your personage.”

Since then, the Dalai Lama has been an “˜honoured guest in India.

In his autobiography, Freedom in Exile, the Dalai Lama remembered crossing the border on a dzomo (hybrid of a yak and domestic cattle): “”¦We must have been a pitiful sight to the handful of Indian guards that met us at the border ““ eighty travellers, physically exhausted and mentally wretched from our ordeal. I was delighted however, that an official I knew from my visit two years earlier was there to rendez-vous with us.”

At that time, Beijing did not say that the Dalai Lama and his entourage were in “˜Southern Tibet (the term used today by Beijing to define Tawang). They knew perfectly well that the Tibetan leader had taken refuge on Indian territory.

The answer is clear, it was not Chinese territory and Mao knew it.If they had really believed that the area was a part of Chinese territory, why did the Chinese not follow and arrest the Dalai Lama when he passed through in 1959?

So, why claim the area 53 years later?

But the Chinese continue to blow hot and cold, at least with India if not with the Tibetans… But on the ground, the situation will probably not change much as long as the Chinese land-grabbing mindset reminds.

The demand of Dai Bingguo is all the more ironic as it comes at a time when China is using ferocious repressive policies against the Tibetans on the other side of the McMahon Line. Remember that under the 2005 Political Parameters and Guiding Principles for the Settlement of the India-China Boundary Question, it was agreed by Delhi and Beijing: “In reaching a boundary settlement, the two sides shall safeguard due interests of their settled populations in the border areas.”

Last week, it was reported that China “has effectively sealed off a vast Tibetan area of Sichuan province, sending in troops and cutting off communications to towns where protesters have been killed by security forces in the past week.”

The situation has never been so bad in Tibet. Hundreds of Tibetan pilgrims, returning to Tibet after attending the Kalachakra initiation conducted by the Dalai Lama in Bodh Gaya, were arrested by Chinese authorities and forcibly taken to undisclosed locations.

Sources based in the Dharamsala, the Dalai Lamas headquarters say: “At around 10 am local time on January 31, Chinese security forces surrounded those Tibetans at the railway station in Tibets capital Lhasa and then put them in a train bound for China.”

The same source affirms that the Chinese security forces have set up 12 checkpoints between Dram, the post at the Nepal-Tibet border and Lhasa. The checkpoints, manned by the Public Security Bureau, are used to stop all the Tibetan pilgrims who visited Bodh Gaya.

Presuming that the new Chinese stand on the border would have had a historical justification (though it does not), would the local Monpa population desire to become Chinese nationals, lose their democratic rights and be treated in such way. The answer is an emphatic “˜NO!

But the Chinese continue to blow hot and cold, at least with India if not with the Tibetans. Dais tough posture was compensated by an “Agreement on the Establishment of a Working Mechanism for Consultation and Coordination on India-China Border Affairs” signed during the visit. But on the ground, the situation will probably not change much as long as the Chinese land-grabbing mindset reminds.