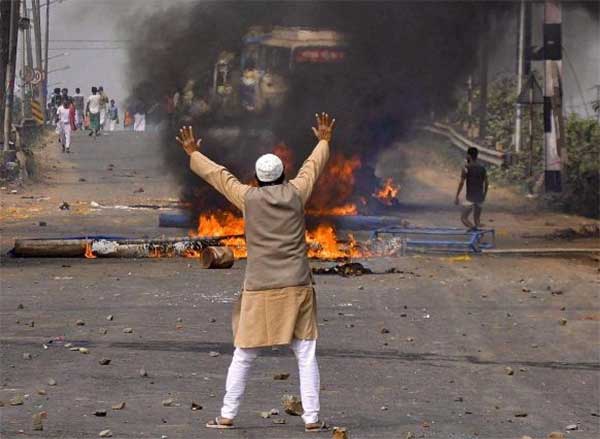 Irena Akbar in her article ‘Why I protest as a Muslim’ in the Indian Express dated 03-January-2020 wrote: “I did not protest just against the legislation (CAA) … it was a protest against passing of Triple Talaq Bill, it was a protest against the Supreme Court verdict in Babri Masjid Ram Janambhumi Title Suit … The Triple Talaq Bill was passed threatening to imprison Muslim men for instantaneously divorcing their wives. In August 2019, Article 370 was abrogated, locking down Muslim majority Kashmir indefinitely.”

Irena Akbar also sees Article-370 from the Islamic prism. The plight of Hindus of Jammu, the Buddhists of Laddakh and the Shias of Kargil does not smite her Islamic conscience

It is plain villainy that a Muslim woman should hold such views against un-Islamic instant Triple Talaq ignoring the plight and nervous uncertainty of her other Muslim sisters. Even Pakistan legally insulates her muslim sisters from instant Triple Talaq. She also sees Article-370 from the Islamic prism. The plight of Hindus of Jammu, the Buddhists of Laddakh and the Shias of Kargil does not smite her Islamic conscience. She is totally unmoved by the pain of the original inhabitants of Kashmir Valley, i.e. the Hindus, who were reduced to refugees in their own country. Their character not to succumb to convert under jihadi threat became their weakness.

The Indian nation, instead of rewarding such steadfast and morally robust Indians chose to be quiet. Religious conversion of a person by any means is worse than murder because it robs both, ancestors and progeny. Hindus and Sikhs in the subcontinent have every right to escape such mass scale murders and it is the sacred duty of Indian State to accept them. The latest case in point is the forcible conversion of Sikh girl in Nankana Sahib, which cast its jihadi shadow on Kartarpur Corridor. The very next day another Sikh Ravinder Singh was killed in Peshawar.  Ravinder’s brother was the first Sikh TV anchor in Pakistan. The jihadis picked up this high-profile target to probably convey that Muslims as in the case in Nankana Sahib, have the unassailable right to kidnap, convert and marry a Sikh girl. As per Pak laws, reconversion is punishable by death, so for a Hindu or Sikh girl, who is kidnapped, converted and forcibly married, there is hell ahead and hell behind.

It did not occur to Irena Akbar that two lakh dalits have been sweeping the dirt of the jihadis in the Kashmir Valley for more than five decades without the hope of citizenship of the State due to Article-370. She also did not mention about the one million refugees who came in J&K from Pakistan due to partition and were denied citizenship of J&K. She does not explain how did the maulvis of UP and Bihar, who run the madrasas and mosques in J&K get citizenship of the state. She may also like to reveal as to who conspired to settle lakhs of Rohingyas in J&K. She will never answer these questions because she like her ilk sees everything from the prism of jihadi Pakistan.

The anti-CAA protests being witnessed in India are being planned and orchestrated by Pakistan’s ISI.

The anti-CAA protests being witnessed in India are being planned and orchestrated by Pakistan’s ISI. The Prime Minister in deference to his official position has been obliquely talking about this in his public meetings. This author has definite information about the international conspiracy, plotted by Pakistan and China and facilitated by Nepal in engineering and fueling these protests. It goes back to end September when Pakistan was unnerved by the Indian posturing on LoC. Pakistani decision makers were informed that India has removed barbed wire fencing (constructed by India) in some parts of the LoC and has adopted unprecedented aggressive posture to assimilate POK. That is why Imran Khan Niazi embarked on nuclear war mongering. It is for this reason that the issue of Gen Bajwa’s extension became a do or die affair for Imran.

Pakistan, given its non-existent economy cannot sustain 72 hours conventional war with India. Under these circumstances, covert warfare remains the only option. On the other hand, China, was also upset that Japan is keen to take-up infrastructure projects in India’s Northeast, especially in Arunachal, Assam and Manipur. In military parlance, it can be said that China feels that Japan is ‘turning its flanks’ on the land frontiers through India. Japan is the bitterest foe of China in the Indo-Pacific, a region that strategically besets the latter. Consequently, Pakistan and China embarked on a covert plan which manifested in ways that are discussed in the succeeding paras. 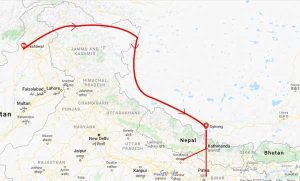 As per sources, in the 2nd week of October, Pakistan dispatched three containers filled with small arms into India from Peshawar through China and Nepal. These weapons, 12 bore and other non-military calibers, carried no markings. These containers arrived at Kyirong (Gyirong) border post in Tibet on 21-October-2019. The Nepalese custom official objected to the further passage of the containers into Nepal. The Chinese however elicited orders in their favour from officials in Kathmandu. Once this consignment of arms reached Nepal, an ex-MP from Bihar took charge and undertook distribution to jihadis of Bihar and UP.

There were no protests in any of these places when Kashmiri Hindus were hounded out from the Valley in 1991.

Meanwhile in Dec 2019 India cancelled the visit of Japan’s Prime Minister Shinzo Abe to Guwahati and Manipur. The annual India-Japan summit was to be held in Guwahati. The venue was chosen in consonance with Prime Minister Modi’s eastward thrust or Act East Policy. Inimical powers stalled this thrust by vitiating the diplomatic environment by engineering the violent protests. It was also done with the objective of vitiating the investment environment in India’s northeast.

The external factor behind Muslim protests in India cannot be ignored nor the factor of Ummah. Even as recently, the second most powerful man of Iran Qasem Soleimani was killed by an American drone in Baghdad, there have been protests in Badgam (Kashmir), in Kargil, Lucknow etc. When something adverse happens in Iran, there is pain and anguish amongst the Shia population in India, which invariably manifests in protests. When something adverse happens in Saudi Arabia, there is pain and anguish amongst the Sunni population in India. So, shouldn’t there be pain and anguish amongst the Hindus and Sikhs, whose brethren happened to fall on wrong side of the LINE of their country. They did not ask for the ‘line’. There were no protests in any of these places when Kashmiri Hindus were hounded out from the Valley in 1991.

Is the nation-state India responsible for the furtherance of the cause of Ummah, i.e. the International brotherhood of the Muslims? The jihadi mornings and Ummah psyche of the Indian Muslims has always been in utterably realized by the politicians in India. Mahatma Gandhi also realized it and therefore supported the ‘Khilafat Movement’, which was actually the ‘Caliphate Movement’ in the 1920s. It is another matter that it was 7.5 lakh Indian soldiers, who participated in World War-1 on behalf of the British, busted the Caliphate or the Ottoman Empire. Without this Indian military manpower support, the map of the West Asia would not be in the present form, which was drawn in accordance with Sykes-Picot agreement. As a consequence, Saudi Arabia and other Gulf States came into existence.

How is it that during this anti-CAA violence, the jihadis masquerading as protesters, came out of the mosques after Friday prayers and descended into sangbaazi (stone-pelting)?

The Indian politicians understand the Ummah and jihadi moorings of Muslims so well that they brazenly paraded Osama bin Laden look-a-like during election campaigns. It is this imperative that compelled them to declare Bata House encounter as fabricated and Ishrat Jahan as the daughter of Bihar. These politicians reckon that only the spread of jihadi mentality can kill the electoral prospects of certain political parties or to say in borrowed Western terms ‘Right-wing parties’. It is for this reason that they oppose CAA, which is already an act passed by both houses of the Parliament. By the same yardstick, these politicians should have burnt the country and the word ‘Socialist’ and ‘Secular’ was added in the preamble of the Constitution without any discussion in the Parliament during Emergency.

Places of religious congregation are places of worship and introspection. These are also places of spiritual cleansing. Emerging out of these residence of Gods or premises of prayers, he or she is subsumed by religiosity and spiritualism. The spell that it casts induces one to act in acts that are benign, rewarding and altruistic. How is it that during this anti-CAA violence, the jihadis masquerading as protesters, came out of the mosques after Friday prayers and descended into sangbaazi (stone-pelting)? This stone pelting in India’s hinterland after Friday prayers was an amplification of sangbaazi that the jihadis indulged in the Valley. Pakistan’s ISI videos on sangbaazi hailing it as intrinsic part of jihad against the infidels were widely circulated.

The CAA has already begun to have its impact. Bangladesh is now worried about the backward flow of Bangladeshis from India. This apprehension has led to the Bangladesh government shutting down of mobile telephone networks in the bordering areas, which has hit more than one crore Bangladeshis. The Bangladesh Telecom Regulatory Authority (BTRC) maintains that it cannot specify the duration of the suspension of mobile network services because of the situation prevailing on Indo-Bangladesh border. One Bangladesh Border Guard official admitted that within a few days, at least 350 people returned to Bangladesh from India and he expected this phenomenon to take the dimension of flood.

6 thoughts on “CAA: Pakistan and China engineered the protests”