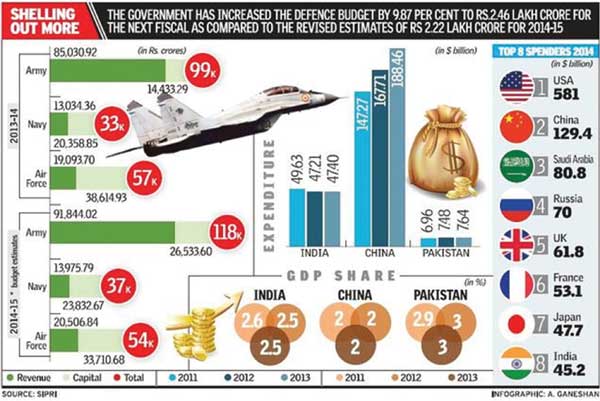 On the last day of February this year, the stylized presentation of the Union Budget was much awaited for the substance of its content, it being the first full Budget of the present Government. Equally awaited by the defence and strategic community were the details of the Defence Budget. It was followed by the annual ritual of commentary and debate on the various aspects of the Defence Budget. An increase over the previous year beyond the inflationary trend of the economy and its percentage of the Gross Domestic Product (GDP) is the first issue in these discussions. The revenue and capital allocations, overall, and further sub-allocation service-wise are the other relevant factors that are generally discussed.

The question that arises is – are the Armed Forces in their present size a sustainable force?

It is generally accepted that the size of the Defence Budget and its proportion of the GDP are cursory indicators of the state of modernisation and preparedness of the country’s Armed Forces. The figures of the budget allocation to the Defence Research and Development Organisation (DRDO) and the Ordinance Factories (OFs) may be viewed through the same prism. However, a pie or bar chart or graphs are only statistical mumbo-jumbo giving no definite indication of the actual state of affairs. One is reminded of my school Mathematics teacher who introduced Statistics as a subject to us young students then, lucidly defined it, “If your head is placed in a hot oven and feet in a deep freezer then statistically, the mean indicates that you are comfortable.” The same applies to these charts and graphs.

Taking each major factor in turn, the Revenue content of the Budget takes into account all aspects that finance the day-to-day running of the armed forces with all its personnel, establishments and current in-service equipment. Pay and allowances, travel and rations, fuel for running of the transport fleet, training exercises and professional courses, provisioning of spares and ordinances, maintenance of all in-service weapons and equipment and the replacement of weapons and damaged equipment and those downgraded due to fair wear and tear or completion of its life cycle as in the case of clothing and personal equipment authorised to a soldier/sailor/airman are paid for through the revenue portion of the budget. Obviously, then the size of the armed forces will have a direct bearing on this factor.

Concurrently, in the existing war establishment of the Army there is a huge deficiency. When a former Chief of the Army Staff (COAS) brought this issue (Hollowness) to the notice of the Government, the issue was deftly side-tracked and attention deflected from the main issue to an unobtrusive issue of the alleged “leak” of the “Classified” document consequently despatching the serious issue of “Hollowness” into orbit to the dark side of the moon. The revenue budget does not indicate any measures to make up for this “Hollowness”. So the question that arises is – are the Armed Forces in their present size a sustainable force?

The Armed Forces, as is the norm world over, will always cater and prepare for the ‘worst case scenarios’. It is the Government which must categorically state the threats and the security strategy around which to build up the Armed Forces. However, that notwithstanding, there are in-house actions that can be taken, particularly in the field of logistics and commonality of equipment between the three services (including Coast Guard). The Army needs to take some tough unpopular decisions too, such as demobilising the 61 Cavalry (Horsed) and downsizing the President’s Body Guard. These are vestiges of a bygone era and colonial pomp need not continue in a modern army. No measure is small. Each penny counts!

The second factor is the capital budget. As Prime Minister Modi had stated at the Aero India Show 2015 in Bengaluru earlier this year, to see India as being the largest importer of weapons and war-like equipment is not a matter of great pride. In fact, it reflects the years of neglect in long term strategic planning. The level of Research and Development (R&D) generated by the DRDO and the absence of cross connect between DRDO and Public Sector Units (PSUs/OFs) are a systemic weakness not being adequately addressed.

To amplify, the DRDO ‘designs and makes’ a product, it seeks support to make a prototype and thereafter looks for another partner for serial production which may be a particular PSU or OF. Integrating this unit to take on the serial production of this newly designed equipment, it has to set up an assembly line from the scratch. Modern industrial manufacturing requires a highly sophisticated assembly line with computerised robots and highly skilled work force. The PSUs and the OFs are too labour intensive, trade union controlled and too rigid in decision making to alter the status quo. These units do not have their own R&D. Therein lies the weakness.

On the other hand, the Defence Procurement Procedure of the Ministry of Defence for new weapons and equipment is peppered with so many unforeseeable and unpredictable hurdles and roadblocks that to accurately forecast this capital portion of the budget is well nigh impossible. Therefore, it is inevitable that as the Financial Year nears the last quarter, a sizeable chunk is easily retrieved by the Ministry of Finance as unexpended portion of the Budget. To increase the responsibility and accountability of the PSUs/OFs, they should be treated as an independent manufacturing unit which earns its own budget – autonomy in all aspects.

The PSUs and the OFs are too labour intensive, trade union controlled and rigid in decision making…

Only a limited central budget should be earmarked for these PSUs and OFs. Revenue generation will be linked to what it produces and what it hands over to the armed forces. Subpar products should be rejected. The entire cost of running the PSU/OF would be the responsibility of its management. Private industry should also be allowed to compete in selling similar products to the forces.

The third component of the Defence Budget pertains to the allocation to DRDO. Conceived and started in 1958, the DRDO was created with a mission to, “design and develop state-of-the-art defence systems and technologies, provide technological solutions to the Services and develop infrastructure as well as committed quality manpower”. At that juncture, the industrial manufacturing base in India was non-existent and therefore, the DRDO by literally ‘hand holding’ empowered private players to a substantive degree.

However, somewhere down the line, the DRDO has slipped on a banana peel; there is a fundamental flaw in its charter. The DRDO provides ‘technological solutions to the services’. The services have to present it with the problem after which DRDO receives funding for the project related to this problem. Since it has such a varied array of laboratories, its R&D effort is entirely demand driven. No innovative pathbreaking R&D is underway. To illustrate the point – after having developed the 5.56 mm INSAS rifle and Light Machine Gun, there was no research ongoing or undertaken to either upgrade this weapon or worthwhile R&D effort oriented to catch up with the contemporary small arms trend of multi-calibre assault rifles and a more reliable and lethal 7.62 mm Light Machine Gun taken on. As a consequence, the Armed Forces are compelled to source an appropriate technologically advanced replacement of the INSAS from foreign arms manufacturers who have developed these modern small arms.

Similarly, the DRDO/OF combine were to produce a 5.56 mm carbine to complete the INSAS family of small arms but were not able to produce even one in the last twenty years. In fact, the obsolete 9 mm Carbine was kept in service without any ammunition as the OF manufacturing the ammunition had stopped its production. The Army has been carrying out trials of four different carbines since 2011for a new Close Quarter Battle (CQB) carbine for the Infantry. The DRDO/OF have produced a carbine which has been called the Protective Carbine and it wants the Army to accept it for the rest of the Army less the Infantry. Any short comings, they say, would be rectified once assembly line production starts – it would be a repeat of the INSAS experience.

The theme of the Aero India Show in February this year was “Make in India”. It figured prominently in the speech by the PM, the Press Interaction of the Raksha Mantri (RM) and Chief of the Air Staff (CAS). The international and domestic aerospace and defence Industry participating were eager know the details but were informed that these were yet under formulation. Many see it as a mere new name to the “licensed production” that India has been adopting for many decades. Even Transfer of Technology (TOT) is in fact limited to that technology pertaining to the specific equipment which is being bought. New technology resulting from R&D would not automatically be passed down.

Obviously then, in future, that particular Ordinance Factory would be producing outdated equipment even when its Original Equipment Manufacturer (OEM) has moved to a higher and newer level of technology which he was not bound to share with the domestic unit. How to keep up with cutting technology is the challenge. Any Joint Venture (JV) with even 51 per cent Foreign Direct Investment (FDI) may not see such technologies being transferred. Therefore, indigenous R&D is imperative. The notion that the Armed Forces will be equipped by off-the-shelf purchases as and when required must be dispelled from all quarters. The Armed Forces are ‘by the people, of the people and for the people’; no honest tax payer grudges government expenditure in maintaining a strong, well-equipped and trained defence force.

3 thoughts on “Budgeting For Defence”