Home  >  News  > Geopolitics  >  BRICS: A wall for some and a platform for others

BRICS: A wall for some and a platform for others 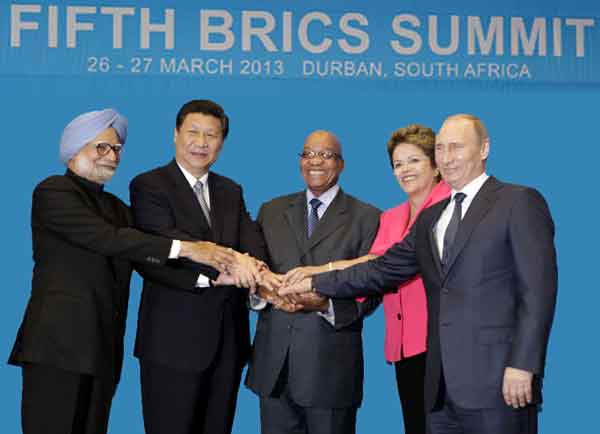 Success at multilateral events like the recently concluded BRICS-5 summit at Durban would be difficult to measure. Nevertheless, members of BRICS must have done something right to have attracted considerable, and one can see clearly, some caustic and dismissive write ups in the West. If envy is a measure then the Summit has made an impact and if concern is an indication, then too it was a success.

China as the leader of the pack, will use this organisation for control and dominance. The West will see this as a threat to existing arrangements and try to pull it down before it takes off.

BRICS 5 may be seen as a disparate bunch, belonging as it does to different continents, languages and culture. Even their strategic and security interests vary. Over time, the grouping has been increasingly seen in West as a group resisting some of their proposals on markets and agriculture, climate change and even on Syria, giving the Club a political thrust.

However, China as the leader of the pack, will use this organisation for control and dominance. The West will see this as a threat to existing arrangements and try to pull it down before it takes off. Xi Jinping, by choosing to visit Russia and then Africa was making a point. The move to Eurasia and Africa is the pivot in return for the much talked of US pivot to Asia. Russia, endlessly battered by the West seeks an ally in China and institutions like BRICS help.

Indian presence will remain weak so long as our economic reforms and progress remain slow and our internal political and policy frameworks remain uncertain. South Africa and Brazil have their own reasons for being members of BRICS but our desire apparently is to be members of any grouping that is seen as global acceptance of our major power status and as compensation for our less than satisfactory relations with our neighbours.

China and Russia seemed to have used their presence in South Africa and in Africa to greater effect than we did. Our PM could not meet the host in a bilateral, while both Presidents Xi and Putin did. Whether this was for reasons beyond astute and alert diplomacy or greater strategic salient of the other two, is not yet clear but it is probably a bit of both. China as Africa’s largest trading partner (US $ 200 billion in 2012) with an investment of US $ 20 billion, was the friendly dragon around.

The announcement about establishing a BRICS Bank could be unsettling for western domination in the future as China with its deep pockets will most likely set the rules. The present international financial structure has been built by the west for itself and it is unlikely that it will allow this dominance to recede easily.

When China becomes the world’s largest economy as it is destined to, it will be the first time in 250 years that the global economy will be led by a non-English speaking, non-Western, non-democracy.

So far all the three biggest financial institutions of the world, the World Bank, the IMF and the US Treasury that, among other things, prints the US dollar, are located in the US. It is the financial control that the West exercised, not just the Pentagon’s $ 700 billion budget and its 700 bases all over that helped exercise dominance.

Almost a century ago, victors of the First World War met for a peace conference in Paris in 1919. America, France and Great Britain represented one tenth of the global population but were deciding the future of the remaining nine-tenths. When the BRICS 5 met now they represented 40% of the world’s population and foreign exchange reserves and accounted for 20% of the GDP.

When China becomes the world’s largest economy as it is destined to, it will be the first time in 250 years that the global economy will be led by a non-English speaking, non-Western, non-democracy. And that country will head BRICS. A global realignment is taking place faster than we think.

As former Australian Prime Minister Kevin Rudd remarked “History teaches that where economic power goes, political and strategic power usually follows.” The much vaunted US pivot to Asia is already being countered by China and one can discern early signs of a Chinese pivot to Eurasia and Africa. Besides, as Tom Watkins, economic and business consultant pointed out, the US borrows 40 cents for every dollar it spends, owes China a trillion dollars and has a 14 trillion dollar deficit. Add to this the cost of the Afghan and Iraq wars to the American people and we are looking at another $ 4 to 6 trillion.

This could lead to a bizarre situation where the US will need to borrow from China to counter China globally. One wonders what would be the price the US will be willing or able to pay to manage BRICS.