BRICS: A Strategic Self Appraisal

In terms of inflows of FDI (million US$) China registered itself as the most reliable destination for investment with $117,586 million…

The intro-trade among BRICS grouping does not clear the threshold required for it be a significant player shaping global economic and political realities. Except for India and China, no two other members of BRICS have significant trade relations. Western European countries hold significant trade relations which cannot be wished away in near future, given the dependence of BRICS nations on EU nations for mechanical and electrical goods along with hi-tech goods.

This factor remains a significant stumbling block in BRICS becoming a counter balance to the West-led economic world order and can be fixed with careful study of strengths in BRICS economy and finding ways to maximise intra-trade relations with each other. For example, in the recent crisis over Ukraine’s sovereignty has led to sanctions by EU on Russia and Russia now looks forward to import its requirement for meat from China. The strengths in India’s information technology, Russia’s science and technology, and China’s industrial capacity and finance must be channelised to increase BRICS intra-trade. India-Russia bilateral trade of about $7 billion has not only remained much below the potential, it has also remained highly skewed for a few items besides defence sector.16 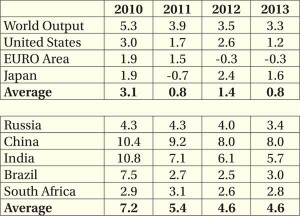 Conclusion: Eradicating Inequality Among the Unequals

While it is early to align with President Putin’s remark that “BRICS has already become an influential factor in world policy and economy,”17 the present trend for the future is certainly poised in favour of BRICS to realise such a remark. Apart from working on economic and financial security related policies, BRICS stands to benefit from resolving inherent deficiencies within the grouping such as intra-trade, military relationships, science and technology sharing and common front at leading world institutions such as UN, IMF and WB.

From a policy perspective, the intra-trade relation between BRICS members must resemble that of Sino-Indian trade relations. China and India are each other’s largest trading partner. Russia must re-divert its import requirements from Western Europe to Asia and other BRICS members. A trend to maximise investment into BRICS economy must come from BRICS economy and a temptation to secure such funds from the West must be avoided. However, such shifts require structural changes and a definite long term planning and policy implementation.

Along with the need for economic and financial independence, a methodological approach towards a strengthened political alignment is crucial. While Sino-Russian relations and Sino-Indian relations have improved in the post-Cold War era, trouble spots do exist. A power struggle within BRICS is likely with inequality among BRICS members. Russia’s relation with India has not yet realised its full potential.18 Russia’s defence relations with China and Pakistan and India’s defence cooperation with US and NATO is a cause of concern.

The projection of BRICS as an alternative to the existing world order is based on its “potential” than “reality”. A comprehensive understanding of the existing world system built over centuries is unlikely to be overruled in an instant by coming together of BRICS members and will require a multi-front approach and not limited to banking, maritime and innovation centre. However, despite the limitations, the BRICS initiative is likely to emerge as a significant centre of international political power.