With the Indian Army successfully test firing an advanced version of the 290 km-range supersonic cruise missile BrahMos in April 2014, India has displayed its continuing advancement towards strengthening deterrence in a volatile neighbourhood and precarious strategic environment. In a Press Information Bureau release, the missile was reportedly launched by a mobile autonomous launcher deployed in full configuration mode with a mobile command post at the ranges. The launch was declared to being successful hitting the designated target on its predetermined trajectory. With both the Indian Army and Navy having already inducted the missile into service, the success of the BrahMos missile continues unabated with it being uniquely configured for installation in ships, submarines, aircraft and on ground vehicles.

Being jointly developed with Russia, the BrahMos is among the fastest supersonic cruise missiles in the world, at speeds ranging between Mach 2.5 to 2.8, being about three and a half times faster than the American subsonic Tomahawk cruise missile.

As a general principle, cruise missiles do not possess defensive capabilities that permit them to withstand an attack. Therefore, the survivability of a cruise missile after it is launched is crucially dependent on stealth in navigation and minimising the interval between the time that enemy air defence systems detect its presence and the time it takes for the cruise missile to arrive at its designated target. In order to saturate defences, minimising the time available to the defender for engaging the cruise missiles is crucial. Going by an initial assumption that there is one defender and that the cruise missile has perfect lethality, the number of incoming missiles that will saturate defences would ultimately be determined by the number of times that the defender can engage the same. [1]

BrahMos has often been described as the “… perfect strike weapon with a fine combination of speed, precision, power, kinetic energy and reaction time attributes”. Being jointly developed with Russia, the BrahMos is among the fastest supersonic cruise missiles in the world, at speeds ranging between Mach 2.5 to 2.8, being about three and a half times faster than the American subsonic Tomahawk cruise missile. An important exception, however, is the Russian Alfa cruise missile, capable of speeds in excess of Mach 4 (four times the speed of sound). Due to the onboard inertial navigation system with three gyroscopes and three accelerometers, BrahMos is a ‘fire and forget’ weapon, requiring no further guidance from the control centre once the target has been assigned and it is launched. [2] Upon completion of assembly, it has a 10-year shelf life, requiring a routine preventive maintenance check once every three years.

It is plausible to assume that cruise missiles constitute an important element of the military arsenals for many nations including India owing to the costs, both absolute and in comparison with other aerial weapons. The growing significance of cruise missiles and the multifarious dimensions of firepower in future wars is becoming more and more evident and in this reference the contribution of the BrahMos to India’s defence is fundamentally significant in a quest to maximise its firepower potential to counter a future military attack.

Although BrahMos is primarily an anti-ship missile, it is also capable of engaging land-based targets. When compared with other weapon systems of its class, BrahMos continues to remain the most cost effective option. With decline in the cost of modern technologies, the overall cost effectiveness of cruise missiles has increased, and this element might alter the fundamental role of cruise missiles and airpower. A comparison of the cost-effectiveness between cruise and ballistic missiles shall be in favour of cruise missiles because these cost on average only 15 percent the cost of ballistic missiles. [3] 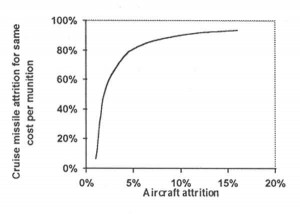 Furthermore, cruise missiles fly at low altitudes and have the ability to evade enemy radars and air-defence systems. Adding to the significance, the tactical capability of cruise missiles implies that it would be exceedingly difficult to defend against them, in part because of the possibility that the defences could be saturated by mass attacks.

India, for long, had been lookout for a long-range weapon option for the Indian armed forces that would also be available to the field force commanders with meaningful accuracy to influence the outcome of operations, providing the much needed capability to undertake deep surgical strikes against a country that launches an attack on India.

…contribution of the BrahMos to India’s defence is fundamentally significant in its quest to maximising the firepower potential to counter any future military attack.

This was in addition to the realisation towards the need for indigenous cruise missile technology and, consequently, India chose the supersonic route to develop the BrahMos—the first of its kind in the world. Since cruise missiles are capable of delivering ordnance over great distances with a high degree of accuracy, they are widely being viewed as a strategically significant weapon of the 21st century to achieve politico-military goals. [4]

In India’s case, the requirement for rapid induction of the advanced BrahMos systems is of pressing need, given that future wars will be limited in objectives, application of force levels and time frame. In these scenarios, only a joint air and land campaign with massive firepower asymmetry will enable successful achievement of military objectives. Thus the contribution of the BrahMos to India’s defence is fundamentally significant in its quest to maximising the firepower potential to counter any future military attack.