Bottom of the Deep Blue Sea 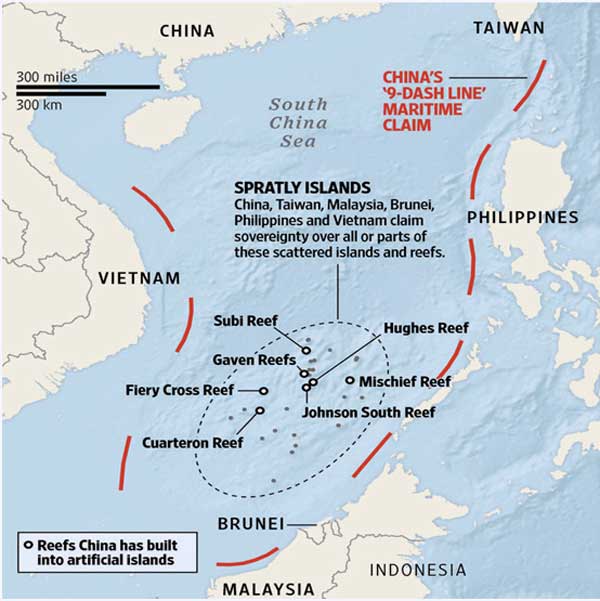 Origins of China’s so-called ‘nine-dash line’ was based on vague descriptions by the Kuomintang regime of Republic of China (ROC) in 1912-1947. China overthrew ROC in 1947 and does not recognize them. The Kuomintang map showed a U-shaped eleven-dash line that China published on November 1, 1947. Later, Zhou en-Lai modified it to a nine-dash line removing two dashes in the Gulf of Tonkin, and extending it into the East China Sea (ESC).

In 2013, China added a tenth dash east of Taiwan. China used it to claim almost all of South China Sea (SCS) but never filed a formally defined claim to the area within these dash-lines. Yet in 2016, when the international arbitral tribunal judged there was no evidence that China had historically exercised exclusive control over the waters or resources within the nine-dash line and ruled in favour of Philippines, China rejected the tribunal’s ruling.

China anyway disregards the freedom of transit in open seas by other nations in complete disregard to the UN Convention on the Law of the Sea (UNCLOS).

There is a viewpoint that ever since 1993 when China became a net importer of oil for the first time, China has been publicly declaring its intentions of stepping beyond its traditional continental land oriented security paradigm. But certainly this was not the only reason for China’s illegal claims and actions in the waters in utter disregard to its neighbours. The region illegally claimed by China has proven oil reserves of around 1.2 km³ (7.7 billion barrels) with an estimate of 4.5 km³ (28 billion barrels) in total.

Similarly, natural gas reserves are estimated to total around 7,500 km³ (266 trillion cubic feet). That is why accelerated land reclamation at sea and hydrocarbons exploration. Since 2014, China has been illegally drilling oil in waters of Vietnam. Chinese vessel ‘Tian Kun Hao’ can dig as deep as 35 meters under the sea floor and dredge 6,000 cubic meters per hour.

Another major reason was the vulnerability of China’s 14,500 km coastline along which lies China’s economic centre of gravity. Hence, accelerated land reclamation including shoals connected to form artificial islands witnessed aggressive construction of bases, posts, establishment of communications, surveillance and logistics facilities, in addition to military and civil airfields.

Chinese aggressive expansion to effectively control SCS is also linked with her nuclear strategy. Chinese submarines on a mission can quickly submerge in deep waters, since topographical conditions exist in the SCS that serve as a sanctuary against attacks. This is also one reason why China wants to capture Taiwan.

All these actions have helped China exercise coercive military strategy while the West has largely been fence sitting. China aims to advance SSBNs operations from SCS to the Pacific Ocean in a future time frame.

In 2016, China’s AUV Qianlong-2 mapped the ocean floor in the southwest Indian Ocean and in exploration of polymetallic nodules, sulfides, and basalt, which contain several metals in significant quantities. Qianlong 2 conducted nine dives for a total of 257 hours.

News reports of last year indicated several active autonomous and unmanned underwater vehicle (AUV and UUV) development programs. In November 2019, China conducted trials over a month plus in SCS of its ‘Haijing 2000’ AUV covering some 1,738 km.

According to the Shenyang Institute of Automation which developed ‘Haijing 2000’, the prototype AUV can cruise at speeds of up to 2 kt and has a maximum operating depth of 6,561 ft (2,000 m). The AUV incorporating AI is officially for environmental survey but obviously would facilitate submarine operations.

A total of 12 second generation Haiyi gliders equipped with a variety of biological, hydrological, and chemical sensors were deployed, which were recovered by the Chinese vessel on January 30, 2020. Resembling US Navy’s Littoral Battlespace Sensing-Glider (LBS-G),the Haiyi features a torpedo-shaped body with nose of the pressure hull containing the buoyancy engine and depth control systems, and mission payload and control unit located in the middle.

Chinese naval activity in the Indian Ocean has gone up exponentially over the past few years, snooping close to Andaman and Nicobar, in India’s EEZ and both in the Bay of Bengal and the Arabian Sea. PLA ships and submarines parked on Pakistan’s coast are picked up by satellite.

PLAN and Pakistani naval activities and joint exercises are on the increase, as are China’s port development activities in the Indian Ocean Region. In 2005, a PLAAF General said, “When a nation grows strong enough, it practices hegemony. The sole purpose of power is to pursue power…Geography is destiny…When a country begins to rise, it shall first set itself in an invincible position.”

The problem with China’s communist regime is that aside from being drunk on power and money, their mindset is rooted in China’s medieval mindset ‘Tian Xia’ (under the heaven) concept, viewing all territories belonging to the Chinese and due to which they attach no sense to territory.

Xi Jinping has even gone beyond this planet by claiming that in ancient times, a Chinese princess was married to the moon. This being his belief, he would probably be hopping mad with Donald Trump recently authorizing mining of the moon and asteroids.

In December 2017, the then Indian Naval Chief had talked about the dwindling submarine capabilities; the need for underwater reinforcements. On December 11, 2019, the Navy inducted its Deep Submergence Rescue Vehicle (DSRV) system which can operate to a depth of 650 metres and can hold some 15 persons.

In the Indian Ocean, the Indian Navy is operationally superior to the PLAN. However, in terms of AUV and midget submarine capabilities we apparently need much more focus though the DRDO has reportedly been working on such projects past several years – same as an armed UAV which has still to see the light of the day. Whether this is because of lack of accountability or is deliberate to facilitate imports is for the policy makers to take a call. There certainly is no dearth of talent in the country. Yet, corporatization of DRDO is being fought tooth and due to politics.

Triumphant over the Coronavirus attack, China has been donating dud or faulty virus testing kits, ventilators and masks to multiple countries, for which China never apologized. With so many countries reporting the same, the obvious Chinese aim is to spread the virus further and emancipate the West to an extent that retaliation would not go beyond some protests. Xi must be laughing his guts out when Trump visiting India during February 2020 had stated that American economy was never as strong as it is now.

China is making millions of dollars in now supplying genuine (hopefully) testing kits and ventilators, since it could visualize global demands well before the outbreak was declared on March 11 by WHO or CHO (China Health Organization) as Japan’s Deputy Prime Minister terms it. Similarly while experts of WHO/CHO say that anti-Coronavirus vaccine development will take around 18 months, China will likely market it much earlier with the head start it had. Possibly It already has the vaccine which it would market after the West is weakened to its liking.

When the Soviet Union had consolidated in Afghanistan, both the US and China helped Pakistan to raise the Mujahedeen to oust the Soviets. China even ran some Mujahedeen training camps in Chinese territory. This was done because of the fear that Soviets will lean on Iran and establish an oceanic front in the Persian Gulf that would be difficult to contest.

In his article ‘The Geographical Pivot of History’ published in the Geographical Journal, London (1904), HJ Mackinder wrote, “Chinese might constitute the yellow peril to the world’s freedom, just because they would add an oceanic frontage to the resources of the great continent, an advantage as yet denied to the Russian tenant of the pivot region.” China has established its oceanic front in the East by consolidating in the SCS, which to an extent could be hedged in. But in context of the Indian Ocean, China already has the entire 1,050 km Pakistani coastline as its oceanic front.

Robert D Kaplan too wrote in his book ‘The Revenge of Geography’, “Pressure on land can help the United States thwart China at Sea.” But America’s focus in Indo-Pacific remains on high seas and it is all set to give up its only toehold on land in South Asia, Afghanistan, to China-supported Taliban.

Ironically, Trump’s focus on becoming President was more to revoke everything Obama had done – even the Paris Accord. His advisors can hardly remind him of history for fear of being sacked. India, therefore, has a bigger problem at hand.