“Phantom Ray did exactly what it was supposed to do,” said Craig Brown, Phantom Ray program manager for Boeing. “It communicated with the ground control station, received its orders and made its way down the runway multiple times, allowing us to assess its performance and monitor the advanced systems on board.” 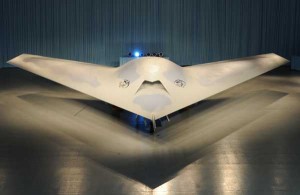 The tests were the first for the Phantom Ray following its rollout ceremony in May. Boeing now will prepare Phantom Ray to travel to Edwards Air Force Base, Calif., on top of one of NASA’s modified Boeing 747 Shuttle Carrier Aircraft. At Edwards, Phantom Ray will undergo high-speed taxi tests before making its first flight. The flight-test program will last approximately six months.

“The autonomous nature of this system is unique, so achieving this milestone speaks volumes about the technology and expertise of Boeing, the Phantom Works organization and the Phantom Ray team,” said Dave Koopersmith, vice president, Advanced Boeing Military Aircraft.