“The addition of a seventh C-17 to our fleet is a significant milestone that strengthens our support of operations worldwide, especially in Afghanistan,” said Peter Luff, UK Minister for Defence Equipment, Support and Technology. “And next year, in May, we’ll mark the 10th anniversary of the delivery of the RAF’s first C-17, which continues to perform superbly — anytime and anywhere.” 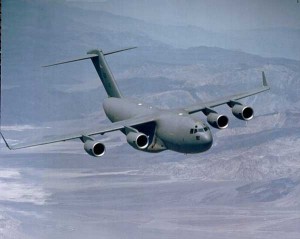 The United Kingdom’s fleet of C-17s has logged more than 60,000 flight hours, and this year supported humanitarian and disaster-relief missions to Pakistan, Haiti and Chile. Assigned to 99 Squadron at RAF Brize Norton near Oxford, C-17s provide critical airlift capability for the nation’s Joint Rapid Reaction Force. Brize Norton is the RAF’s main operating base for strategic air transport and air-to-air refueling.

The C-17 is the world’s only tactical airlift aircraft with strategic capabilities that allow it to fly between continents and land on short, austere runways.

“The C-17 provides rapid-response capability for relief missions where no other strategic airlifter can land,” said Rick Heerdt, Boeing vice president and C-17 program manager. “We are proud to be your partner on every one of those missions.”

Boeing supports the RAF’s C-17s through the C-17 Globemaster III Sustainment Partnership, a Performance-Based Logistics program. The arrangement provides the RAF with the benefits of complete “virtual fleet” access and an extensive support network. The virtual fleet concept enables C-17 customers, especially those with smaller numbers of aircraft, to benefit from worldwide parts availability and economies of scale when purchasing materials.

Boeing has delivered 224 C-17s worldwide, including 20 with international customers. The U.S. Air Force — including active National Guard and Reserve units — has taken delivery of 204. Other customers include the Canadian Forces, the Royal Australian Air Force, the United Arab Emirates Air Force and Air Defence, the Qatar Emiri Air Force, and the 12-member Strategic Airlift Capability initiative of NATO and Partnership for Peace nations. U.S. President Barack Obama announced this month that India and the United States have reached a preliminary agreement for the Indian Air Force to acquire 10 C-17s.