All of us would agree that aerospace power has multiple applications in peace or war. It impacts our lives, energises international relations and economic activity. It also matches the demands of national security so perfectly that it is a preferred instrument. Resultantly, civil and military aviation are growing world-wide, for those who can afford it.

We are also aware that aerospace power is based upon high technology; its effectiveness and reliability is dependent upon it. Lack of aerospace power can severely curtail national options and given India’s circumstances it is vital. I will restrict myself to military aspects. 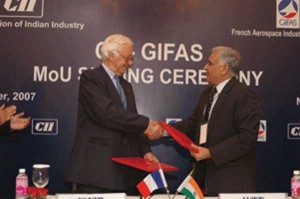 Lt Gen. S S Mehta, Director General of the Confederation of Indian Industry (CII), and Mr Guy Rupied, Managing Director of GIFAS, the French Aerospace Industry Association, signed in New-Delhi, a Memorandum of Understanding to promote co-operation in the field of Defence between their respective industries.

Contours of the subject

What is the future of aerospace power? That  is the fundamental question. Certainly nations that lack it will seek it. The proliferation will spur leading nations for qualitative improvements to retain their edge; requiring huge investments, which in turn would come from sales. But the differential in capability will remain, prompting second-tier nations to indigenise.

Developing aerospace technology costs billions and takes generations and therefore ToT is the easier option for developing countries. The other aspect that drives the need, is force structure requirements of an Air Force, which wants capabilities based on threat perceptions. These plans have a long-term perspective and are largely fixed. Economies of scale are therefore essential for financial viability of aerospace projects, requiring external markets.

If IAF’s induction plans are crafted upto 2020 – the MMRCA, FGFA, with 40 year ‘lives’, we are looking at 2060 for D&D objectives. Current projects are ToTs, licensed-manufactures or JVs. It is not easy to guess the shape of aerospace power in 2060. Would the accent shift to unmanned flight, to missiles; or would ‘air’ be more of ‘space’. Technology advances are revolutionary, the global environment also changes radically and leading nations have more say in the direction of technology development. What should be our long-term D&D objectives? These issues defy simplistic answers.

Despite the uncertainties, need for ‘application and transportability’ of national power and thus for aerospace power, in some shape, would remain. D&D and manufacture will therefore remain important, for it is only through experience that new ideas and technologies appear that could radically alter the nature of warfare. So we have to move forward. The Govt can help with a ‘technology roadmap’ linked to a national security policy.

The elements of aerospace power are considerable funding, a very high technology base, very competent and motivated people, well-endowed R&D infrastructure, efficient industry with deep pockets and an operational feedback. For a developing nation, India is fairly well-off on many counts.

But we definitely do have a ‘technology gap’. There are associated issues of availability and costs; enhanced by long gestation and rapid obsolescence. Clearly, we cannot simply follow footsteps in our quest for indigenous technology. We must identify core-technologies with the maximum potential to indigenise and those we must pursue vigorously. We must also develop core-competencies in metallurgy, avionics, simulation, etc. It is also imperative to identify emerging technologies and develop them to secure a lead in that niche area. Presently, our D&D is relatively limited, which is OK for licensed-manufacture, but not beyond. We must involve the private sector in D&D too, not merely in production.

Keeping the imperatives for indigenisation from affecting our preparedness is important. In supplying to the arsenals, timelines & ORs must be adhered to. There is also a need for greater quality consciousness. Maybe we should create pure R&D organisations; or fund existing ones, such as IITs, and take off from there. We do have a large brain-bank. A lot is already being done, our R&D infrastructure is growing steadily. But more growth, some re-orientation and re-organisation are necessary.