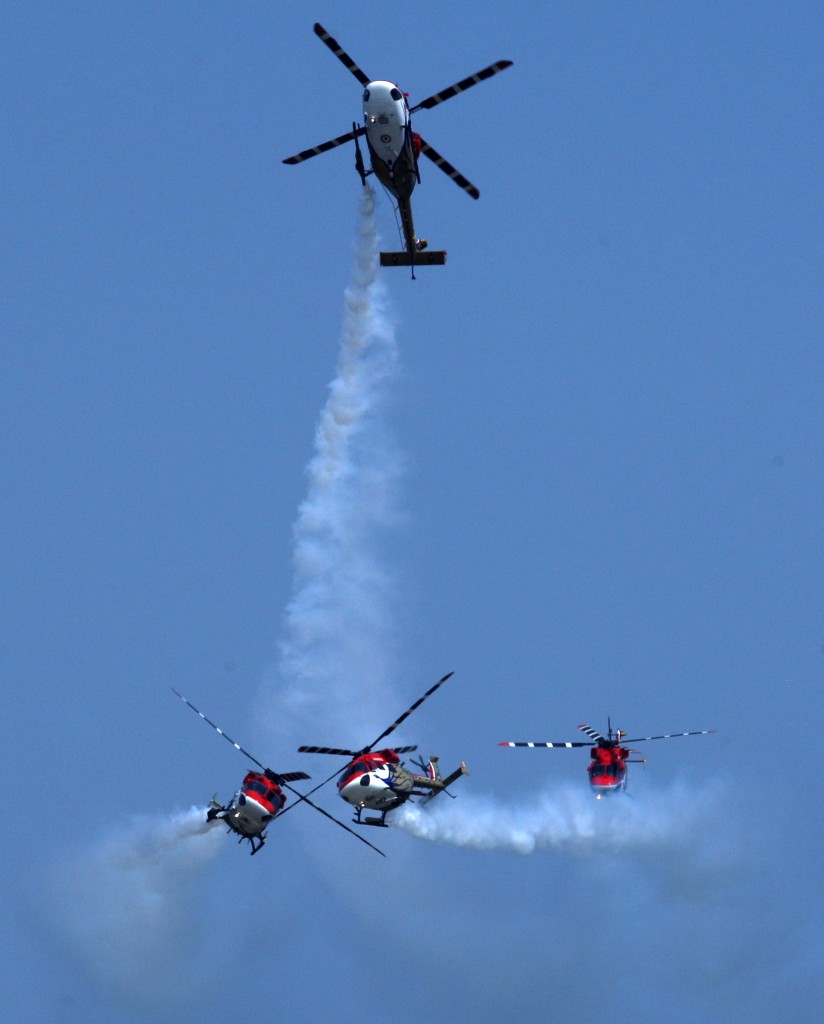 “Preparation for war is an expansive, burdensome business, yet there is one important part of it that costs little – STUDY.”
— Field Marshal Slim

The IAF was created on paper on 8th Oct, 1932 by the Indian Air Force Act of 1932 and on that fateful day six Indian officers were granted the King’s Commission. The IAF actually took to Wings on 01 Apr, 1933 when it was equipped with four Wapiti aircraft.

The IAF must pay eternal tributes to two valiant airmen of the RAF, whose insistence, despite significant opposition, ensured the IAF the status of an ‘Independent’ service. The first was Air Vice Marshal Salmond, the then Air Officer Commanding in India;1 the other was Air Marshal Sir Thomas Elmhirst, the first Chief of Staff of the IAF after independence. His acceptance as Chief of Staff was conditional to an assurance from Prime Minister Jawaharlal Nehru that the air force would be a fully independent service. Until then the Commander in Chief of the Indian Army had exercised control of both the Army and the Indian Air Force.2

Table 1
Induction of Aircraft into the IAF3 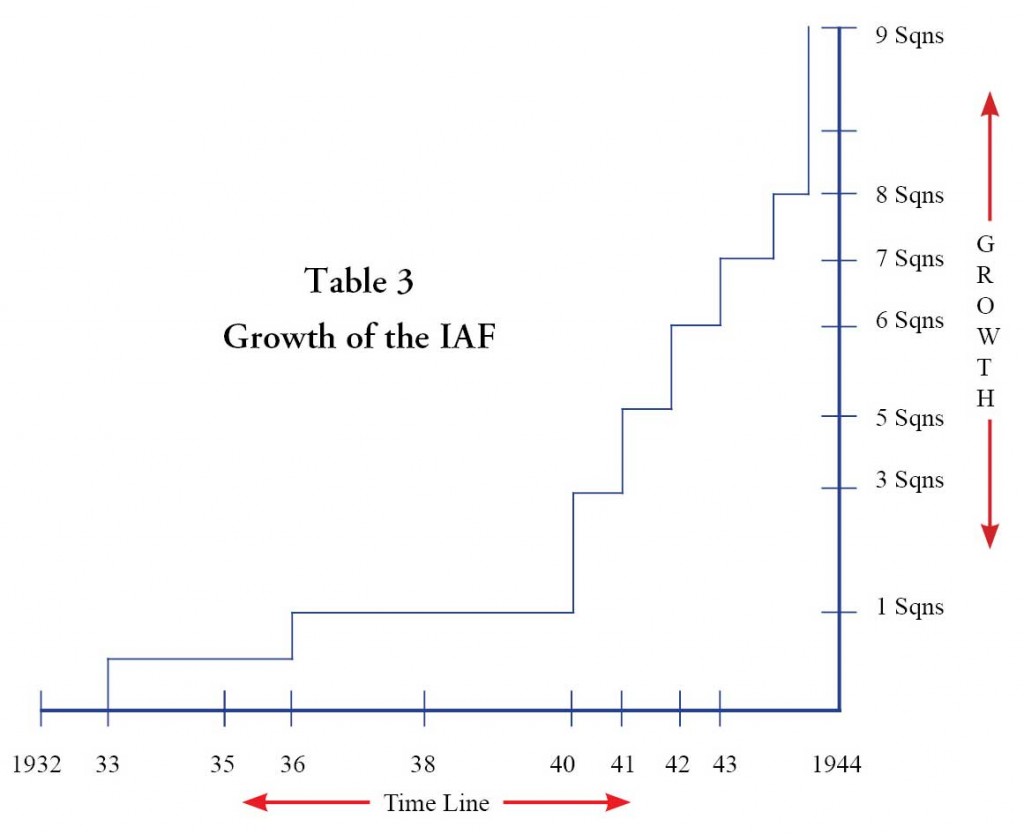 The British visualization of threat to India was from the North-West, possibly Russia and marauding attacks by the warring tribes in Afghanistan. For this purpose they deployed the RAF in India, varying in strength between 6–8 squadrons in the 1920s and 30s. As the Japanese struck the allies in December 1941 and rapidly advanced to the doorsteps of India, urgent need was felt to expand the air forces for the defence of India.4 By 1944, this force structure would expand to accommodate 64 RAF squadrons, 28 USAAF squadrons, nine squadrons of the IAF and 16 and 9 transport squadrons of RAF and of USAAF respectively.5 A mighty force of nearly 125 squadrons just for the Burma front. Yet, post independence, the experts committee recommended a strength of only 20 squadrons for India!

During World War II, the IAF which had been so quickly expanded and committed at the Burma Front, came out with flying colours. The number of gallantry awards bear testimony to the fact. Moreover, while still flying aircraft which were decidedly inferior to all the Japanese aircraft, the IAF squadron suffered very low attrition to enemy aircraft. This is a proof that young IAF leadership and professionalism was way above the set expectations.

Prof PMS Blackett, an originator of Operations Research technique used so successfully to enhance effectiveness during World War II and President of the Royal Society, was appointed as an expert on defence matters to Prime Minister Nehru. He advised a small military force with its role being (i) securing land frontiers against raids by border tribes, or attacks by second-class army approximately equivalent to the Afghan Army or Pakistan Army, or both combined; (ii) support to civil power; (iii) a small expeditionary force limited to the vicinity of India and the capabilities to expand quickly into an air force capable of first-class war. He advised against the IAF setting up four squadrons of long-range bombers. Prof Blackett’s arguments, probably swallowed by the Indian decision makers seem quite naive. Blackett argued,
“…if you (Indians) started initiating bombing, (enemy) bombers would bomb back and you would spend more probably in defending your cities. It would simply ruin you…’ Blackett then propounded the ‘main idea’ for an air force, which limitation the IAF has generally stuck to for many decades, namely, the emphasis on short-range fighter aircraft — the exception being 16 odd Liberators from amongst the semi-wrecked Liberators bombers in the late 50s. “[A]s far as Indian defence is concerned,” Blackett affirmed, “strafing, not bombing (makes sense)…” He thereby assumed that if the IAF forswore bombing missions, so would the enemy air forces!6 When examining the use of combat air force we would see the shadow of this idea cloud decision — making during the 1962 War.

The British also conveyed to the US leaders not to agree to the Indian request for night fighting capable aircraft.7 Prof Karnad, thus, concludes that, “The Indian military, after Independence took the wrong cues and the Indian Air Force fixing strictly on territorial defence and buying weapons essentially for tactical use.”8 That is why the RAF destroyed the war time surplus Liberators bombers in India, rather than hand them over to the IAF. At the end of World War II, as the British and US forces left India they chose to destroy B-24 Liberators rather than hand them over to the IAF — for obvious reasons they did not wish a bomber force capable of a strategic role with the IAF. However, Indian technicians were able to restore 16 Liberators from the smoldering remains of nearly 100 bombers left at Kanpur.9

In 1962, India having suffered a crushing defeat by the Chinese army, and expecting another attack in 1963, sought military assistance from the UK. The British Chiefs of Staff Committee recommended a force of five squadrons of Canberra bombers, together with logistics and air defence support in the hope that ‘a clearly demonstrated ability and offer to intervene with such a force’ would have ‘some deterrent effect’ on the Chinese.

Similarly, when India sought military help from the USA, the US was not willing to supply the Mach 2 Star fighter F-104 which the IAF had short listed.10 By now it was clear that India faced military threat on two separate fronts, with a distinct possibility of the threats being simultaneous.

However, in the 1950s a decision was taken to initiate diversification of supply sources and an order for 100 Ouragans (Toofani, as they were called by the IAF) was placed with France. In 1957 significant inductions were made – the French Mystere IVAs, the British Hunter FMK 56s, Canberra B(I) Mk58s and little later the Gnats – a light weight fighter. This raised the force level to 33 Squadron. Amongst the transport aircraft, IAF now had Dakotas, Packet C-119GS and the Canadian Otter, DHC-3 and Caribous. 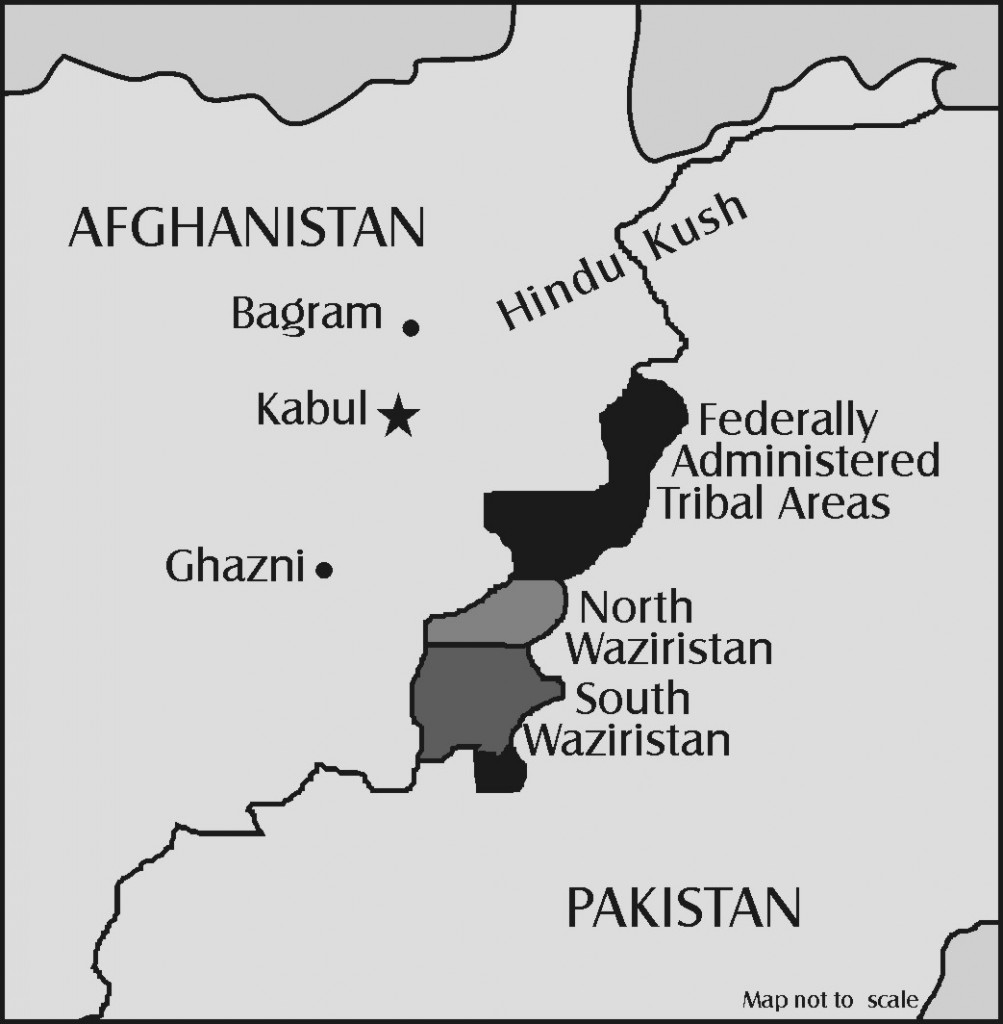 Air policing of the British Empire had its genesis in the deserts of Somaliland, Iraq, Jordan, etc in the early 1920s. The NWFP of India inhabited a mix of friendly and not so friendly tribal population. The rugged mountainous terrain here has always been a major disadvantage to outsiders trying to impose their rule. Most of such expeditions in the past, whether by Shahjahan and Aurangzeb, or the two attempts by the British in the 18th and 19th century met with stiff resistance and eventual defeat. Sometimes turning into horrifying disaster. Use of aircraft to support the operations by the ground forces, in comparison, was quite successful. Moreover, its effectiveness lay in the drastic reduction of ground forces, thereby, few friendly casualties and the highly reduced fiscal costs of maintaining control. Many analysts tend to dismiss the study of these operations because it was by colonial masters over alien population. They opine that modern civilized governments would not resort to such air operations against their own population. Let me offer a differing perception. Own citizenry or not, if groups of people act in a hostile manner and threaten the unity and integrity of our nation, then it is the moral responsibility of the Government to deal with these elements suitably, including the option of using air operations. And we did this successfully in 1960–1961 in Nagaland. Therefore, a study of the nature of operations in NWFP deserves special attention and consideration, before being dismissed as not relevant.

The air action on the Frontier Province consisted of blockade, proscription and destructive air action or cooperation with land forces.11 Certain areas used to be declared out of bounds and affected population warned about such decisions in advance. If they failed to follow the restrictions thus imposed, they were subjected to bombing. Either direct bombing against them or bombing of items dear to the people as retribution. The targets could include water wells, crops in the field, and sometimes even the dwellings of people and cattle sheds.12

Proscription was to deny certain areas to the hostile parties, either as a base or as a route. Destructive action was directed against offenders, while co-operation with land forces comprised convoy escort, visual and photographic reconnaissance, air supply, message dropping and picking, casualty evacuation, artillery direction and lastly, attack on targets designated or earmarked by the ground forces. The bombs used were generally 20 pound, but occasionally 112 and 250 pound bombs were also dropped.13

The pilots of the No.1 Squadron IAF undertook Army co-operation training for four and a half years after their raising. In September 1937, the ‘A’ Flight proceeded to Miranshah in North Waziristan for operations against hostile tribesmen. They operated for about two months here. Thereafter, for short spells of time, No. 1 Squadron’s three flights in turn, operated in Waziristan in 1938, as well as 1939. In 1939 additional, coastal duties too were undertaken.14 While operating from Miranshah, the aircraft used to be wheeled inside the fort for the night time to ensure safety. Though the strength of the Flight was only four aircraft and pilots, they averaged a flying time of 370 hours per month. This was the average for a full fledged RAF Squadron. ‘C’ Flight under Fg Offr Majumdar upped this figure to 400 hours per month. In one incident Mehar Singh force landed his aircraft with bombs on. It was a well executed landing. During the ensuing night Mehar Singh evaded the tribals and rejoined the Flight next day. Mehar Singh flew 100 hours per month.

There was a remarkable case of innovation and improvization in air supply. On 7 August 1940, one ground post was hard pressed by hostiles and ran out of ammunition. The pilot Sqn Ldr Subroto Mukerjee, Commanding Officer No. 1 Squadron, on getting this message, then and there dropped the aircraft’s machine gun ammunition, putting it inside their socks and thus saving the day for the threatened troops.15 The first two squadrons of the IAF were utilized in the NWFP by rotation. This was their first operational experience in hilly terrain and served to prepare them for the forthcoming operations in Burma.

On a larger scale than the IAF and much earlier, the RAF too was operating in this area. There was another innovative first by the RAF which needs mention here. This is the story of the first major airlift in aviation that was carried out to evacuate civilians from Kabul. In 1928–29 inter-tribal disturbances in Afghanistan saw some people trapped at Kabul. In all, 586 men, women and children of different nationalities and eleven tonnes baggage were evacuated in flights between 23 December, 1928 and 25 February, 1929. For the aircraft of that era, crossing 9000 feet high mountains, fully loaded and sometimes in bad weather, this was a daunting task.16