Home  >  News  > Geopolitics  >  Bio-warfare Attack Scenario on India – What should be our response?

Bio-warfare Attack Scenario on India – What should be our response? 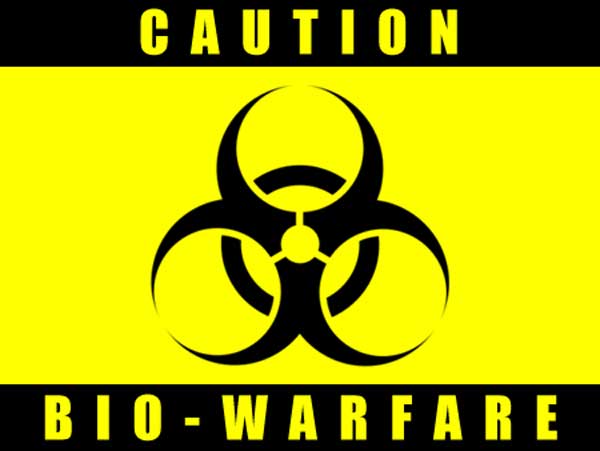 Cyber and Biological warfare are potentially the most dangerous forms that have emerged as these have the important aspect of deniability built into their mechanisms. Ability to deny or obfuscate a covert attack is becoming an important aspect of war forms that are emerging[i]. In this article we paint a scenario of how such an attack on India may look like. This is an hypothetical scenario for the purpose of studying and learning the play of such a scenario as an academic study. Also, it will help to speculate on what India should do if such an attack takes place. The purpose of this article is also to open a debate on thresholds of where India will consider that it has been attacked by weapons of mass destruction (WMD) and when it will be below that threshold.

With the changes in the internal political re-structuring of states of India – J&K and Ladakh have become two new Union territories. Pakistan and China both want to respond to these changes in a manner so that their joint interests are not only protected but also enhanced through streamlining of CPEC all the way to Gwadar port from Xinjiang and Tibetan Autonomous Region (TAR) through Xinjiang. The connectivity infrastructure passes through Pakistan Occupied Kashmir. China has heavily invested in the success of CPEC and considers it to be the flagship of its overall strategic plan called Belt and Road Initiative (BRI). China and Pakistan consider the internal reorganization by India to be a game to disrupt their CPEC.

Pakistani deep state in agreement and in consultation with Chinese “iron” friend have hatched a plan to incite insurgency in Indian side of Kashmir, Punjab and also eastern states of Nagaland, Arunachal and Assam. Pakistan Army Chief is under tremendous pressure from within the army as well as judiciary. On 3rd of January 2020, Pakistan Army Chief takes over the reins of Pakistani Government and activates its ISI backed insurgents inside India. A state of Emergency has been declared in Pakistan and Pakistani Forces (Army, Navy and Air Force) are in full support and readiness. China is in full support to Pakistani initiative but without actually committing any of its forces

On 5th January 2020 – Indian Union territory of Jammu and Kashmir is rocked by a series of bomb blasts – in civilian areas and on security forces – killing 200+ civilians and 30 Indian security personnel’s in various incidents.

Indian Government calls for a cabinet committee meeting on 6th January 2020 (let us call it the D-Day). In the Cabinet Committee two other reports have been tabled as described below

A Malaysian Doctor provided a peculiar strain of a virus developed in his laboratory (about 2 months back) to Pakistan ISI, (as per his claims).

Pakistan has sent 50 suicide-bombers (20 females) of Lashkar infected with the Virus and sent five of each to Kolkata, Delhi, Ahmedabad, Mumbai, Chennai, Bangalore, Gauwhati, Chandigarh, Shimla and Lucknow. The virus starts affecting the population in these 10 cities after one month (before a month from start of the D-Day). The Virus attacks  a random part of the human brain and suppresses its functioning initially. This leads to non-functioning of certain body organs and may lead to death over a period of sixth months. India is grappling with the spread of this virus in 10 cities – many deaths are reported. Medical fraternity and government have no information that this is an actual biological attack.

Only a fluke encounter with a female blood donor in Delhi who died while donating blood in Safdarjung Hospital on 19th December, India found the handiwork of Pakistani ISI. It seems all 50 lashkar operatives donated blood at various blood donation centers in the 10 Cities. Out of the 50 names identified, it is found that 10 are already dead and remaining 40 are untraceable.

Indian intelligence agency suspects that Malaysian Doctor is on the Payroll of China and it is China that has provided the Virus and antidote to ISI.  Intelligence is working on establishing the extent of Chinese involvement. The tip has come from Russia about this.

One month before the D-day, the computer “worms” sleeping in various routers supplied by Chinese company gets activated at major Mobile service providers infrastructure (including smart phones).

These worms have pre-defined key words in their memory and when those are typed or accessed in any document or in voice – the document is either destroyed or the specific part routed to a central link in Sri Lanka. A small ship at Hambantota forward these to a central server in Chinese national intelligence that has a US “Prism” like software to collate, analyse and find out key “information/intelligence” from the data.

A social media hobbyist (an open source developer based out of Cochin is grappling with the problem with his system that deletes its smart phone chat with his girlfriend whenever he writes or types, “what’s the PLAN?”).  He investigated and just two days before the D-Day sends his discovery to Police – saying his systems are hacked by someone in Sri Lanka as he is able to trace back his discovery to the Ship in Hambantota.)

Given the above scenario with attack in all three dimensions – cyber, bio and physical domain – and all attacks are within the threshold of deniability, what are the key questions India need to answer and what should our response be? We need to assess the depth of Pakistani-China nexus? Will US under Trump be willing to work with India – openly? What about Russia under Putin? EU and Japan? What sort of support we can expect? Who will be Indian supporters and to what extent? Can India initiate a conventional war or should we be initiating “Surgical strikes”?

Pakistan deep state cannot take over the government in an open and overt manner and want to keep overall control over a pliant civilian government under Imran Khan. Nawaz Shariff was removed because he was not accepting Army-ISI control. The existing PM and so-called Civilian Government is also not being effective and pliant to the depth that deep state want. Further, there are indications that Corps commanders are not very happy with the extension given to Chief of Army Staff and hence there are protests being artificially created to remove the Pakistan Civilian Government. The Coup as described in the scenario requires that Pakistani Army creates a war with India for which it has instigated India by sending virus infested jihadi’s to India.

Indian strategy should be to create a unified response including the articulation that as per our nuclear doctrine a bio-war attack on India is a WMD attack and hence Pakistan has crossed the threshold and we are now free to respond with Nuclear weapons. All major world powers need to come together to de-capitate Pakistan Army and free the civil population under its control. India should create an  Architecture of Pakistan which is further divided into logical Baluchistan and Punjab while uniting the POK back to Ladakh. To achieve these objectives India should organize a world force including US and Russia and even China to eliminate the rouge Pakistani army.

Key Insights from this exercise

Crisis Gaming or Seminar Gaming is a well-established methodology to explore alternative future scenarios as a tool and mechanism to understand the decision making in such Crisis Situations involving conflict and war. Given the type of warfare that is emerging with cyber and bio warfare threats increasing as they have added advantage of deniability built into the mechanisms, India need to be well-prepared to respond to such attacks. One thing is clear that detecting such an attack may take lot of time and also the attacker can deny its involvement in these attacks. However, in the event of such an eventuality, the options for India to invoke its nuclear doctrine should also be kept open and communicated to its adversaries in no uncertain terms. That is the most stable deterrence against such attacks.

3 thoughts on “Bio-warfare Attack Scenario on India – What should be our response?”