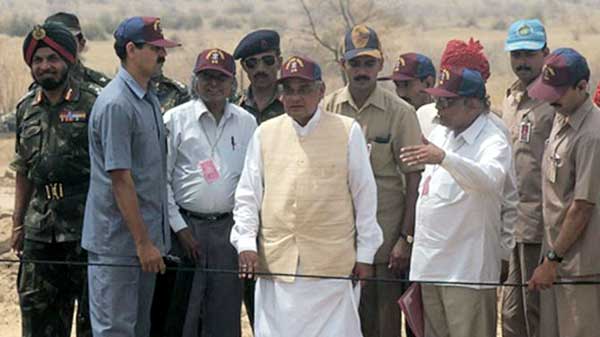 On 25 December 2014, the govt. announced the award of nation’s highest civil honour of Bharat Ratna to Shri Atal Bihari Vajpayee. It is an honour that should have come to him much earlier, the moment he became ill and left active politics. Not giving him this honour in the long ten years rule is one of the blots on the erstwhile UPA (United Progressive Alliance) govt. Be that as it may, it is necessary to assert that Vajpayee is not merely a party icon but a national leader in his own right in history of our nation.

India’s first Prime Minister, Jawaharlal Nehru, had realised the potential of Atomic Energy for economic development in an energy starved country. Under the leadership of Dr. Homi J. Bhaba, India, over time, built up an impressive and complete capability in the nuclear field. Nehru, as a pacifist, was against nuclear weapons. Yet he kept the Indian nuclear programme ‘independent’ of foreign curbs with the aim that should India need nuclear weapons at some future date, it must have the infrastructure ready. Indira Gandhi, reacting to the pressure created with the Non Proliferation Treaty (NPT) of 1968, carried out the first nuclear test in May 1974, signalling Indian resolve. In the then prevailing Cold War, India did not feel it necessary to go any further as the Soviet Union’s support kept the Chinese threat under check.

The demise of the Soviet Union in early 90s, rapid economic strides taken by the Chinese and the first Gulf War of 1991, totally changed security environment for India. The Gulf War of 1991   demonstrated American power. This was reinforced with its actions in Kosovo, a province of former Yugoslavia. Many feared that after Baghdad, Mumbai would be the next target. Many in India urged successive governments to take the decision to go overtly nuclear. But fear of economic embargo and lack of political will made India back out at the last moment. If India had carried out a nuclear test, as France and China were then doing, it would be violating no treaty obligation.  But we did not test then. A clause on ‘entry into force’, inserted at the instance of China, meant that  even if India  did not sign the CTBT, its room for manoeuvre was being restricted.  A time would come when it would be difficult for India to defy world opinion and carry out a test explosion.  It was imperative for India to make up its mind and carry out the minimum number of test explosions. On 11 May 1998, three underground nuclear detonations took place at Pokhran.  This was followed on 13 May by another two detonations.  These tests confirmed that India could manufacture thermonuclear warheads and carry out sub-critical computer controlled nuclear testing. Vajpayee declared that India’s nuclear weapons were for purely defensive purpose and gave a unilateral ‘no first use’ pledge.

By asserting her power India raised a furore in the world. Indians rejoiced at the success of our scientists and applauded the Prime Minister for his boldness. RNIs (Resident Non Indians) raised a stink, but most of the people of India ignored these ‘Children of Macaulay ‘who had got used to the Brown Man’s inferiority thesis and were believers in the ‘White Man’s Burden’ myth propagated by Rudyard Kipling.

America slapped economic sanctions on India. Technological sanctions had been   imposed in 1974. These were further tightened. In retrospect it seems clear that the Pokhran tests came not a day too soon. The signs coming difficulties were there for all to see. In 1991, the West changed its non-proliferation policy to a more aggressive ‘counter proliferation’. ‘Washington Post’ had reported in 1993 that a sum of $ six million was earmarked specifically for South Asia to ‘educate’ the Indians on this issue Recipients of West’s largesse  mounted a campaign in the Indian media under the garb of peace-movements to disarm and castrate India. The political elite then ruling had a profusion of skeletons in cupboard, all known to foreign intelligence agencies and such stakes in numbered Swiss Bank accounts that the Indian preparedness in the vital security area was deliberately degraded. It was good fortune of India to have a Vajpayee led government at this crucial moment in our history. He took the decision and saved future generations of Indians from being ‘Iraqed’.

The nuclear tests were criticised on a number of grounds. A leading Economic daily gave screaming headline of loss of aid and impending disaster. The reality was that despite the loss of $ 1 billion in aid, India collected nearly $4Billion through RIBs (Resurgent India Bonds). Mention of China as the main threat also came under criticism. Like a good general, Vajpayee anticipatedthe Pakistani tests and subsequent American pressure to tie Indian nuclear programme with our small neighbour. By linking Indian nuclear tests to Chinese threat, India neutralised any such pressure in future and the constant attempt by the West to equate India with Pakistan.

The foregoing discussion has been heavily biased in favour of the events in the Indian subcontinent. That is unjust to Vajpayee as he is the first Indian Prime Minister to have ‘realistically’ played a global role. Jawaharlal Nehru indeed did, but it was a role not backed by economic of military strength and he came a cropper in 1962. The major breakthrough in Indian foreign policy came after Pokhran II with talks between Jaswant Singh and Strobe Talbott.

The first triangular relationship that India constructed was the India-US-Israel triangle. Liberated from the knee jerk anti-Israel tendency, this relationship is on firm footing to counter the political Islam and Jihadi terrorism. India has secured tangible gains in terms of state of the art weapons from Israel (with American blessings) and also made sure that the US does not supply military hardware to Pakistan. This has resulted in India being able to get the better of the terrorists in Kashmir and also maintain an edge in conventional arms over Pakistan.

The second triangular relationship that has evolved is between India-Iran-Russia. This is in a way complimentary to the first one as all the three countries are victims of ‘Waahabi Islam’. Russian headache of Chechenya is well known. Also the Russian fear of spread of Islamist ideology in Central Asia is very real as there is large presence of Russians in Muslim majority country of Kazakistan. The Shia Iran has been a staunch supporter of Pakistan. So much so that in 1965 Indo-Pak war it sheltered the Pakistani aircraft and even supplied it with arms and spares. But thanks to growing anti Shia pogroms in Pakistan and the Taliban nightmare in Afghanistan, it has come to value Indian moderation and friendship. The Indo-Iranian defence co-operation would have been unthinkable a few years ago. India also acted as bridge between the US and Iran. Since this relationship helps the US fight the Islamist forces in Middle East and also has the potential to help it out of Iraq quagmire, it enjoyed quiet American backing.

The third triangular relationship that he developed was between India, China and Brazil. In the  WTO conference the trio successfully thwarted the developed world’s efforts to foist an economic regime that would hurt the agricultural economies of the developing countries. This is one relationship that is purely economic and has no direct security dimension. Yet by standing up to the West, including the US, India demonstrated that it is no camp follower of the West.

There was one more interesting development that could have far reaching consequences. This was the alliance between India-US and Japan. For a very long period Japan acted as American proxy in Pakistan and worked against Indian interests. While the Japanese have been making large investments in India and also earning good profits, Japan has been singularly hostile to Indian security concerns. With the imminent rise of China to super power-dom and Chinese proxy North Korea’s threatening posture, Japan seems to finally waking up to an Indo-Japanese alliance. Japanese technology married to Indian skills and resources can be the most effective counter to the Chinese desire to dominate Asia.

Foreign policy in India is generally handled by the Prime Minister himself. One can clearly see the Vajpayee stamp on all this. Only a person with poetic imagination could weave such a complex web.

Vajpayee will be remembered for his unflinching devotion to the nation’s security and successfully navigating the country through a turbulent times. RIP Atal Bihari Vajpayee.