Beyond the Indo-Pak FS level Talks 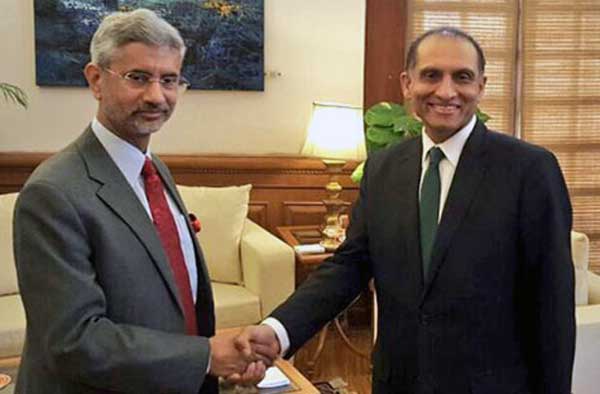 Finally the Foreign Secretaries of India and Pakistan met on 26-April-2016 on the sidelines of the Heart of Asia, Istanbul process being hosted by India. Keeping the events of this year starting with the attack on the IAF base at Pathankot by Pakistani terrorists and the Pakistani narrative of yore, there were no surprises.

Aizaz Ahmed Chaudhry was obviously well briefed, rehearsed and instructed not to deviate from the script given by the Pakistani military.

Aizaz Ahmed Chaudhry was obviously well briefed, rehearsed and instructed not to deviate from the script given by the Pakistani military. Accordingly, Chaudhry emphasized that Kashmir remains the core issue requiring just solution in accordance with UN resolution and wishes of Kashmiri people.

This has also been the main plank of Pakistan at international forums, without mentioning that the UN Resolution on Kashmir, vide which Pakistan still demands, plebiscite, had categorical pre-condition that Pakistan first withdraw all her security forces from territory of Jammu and Kashmir (J&K).

Pakistan did the opposite and, unlike India, drastically altered demography of POK by design, killing the said UN Resolution. Results of first ever poll both sides of the LoC in J&K conducted by Royal Institute of International Affairs (Chatam House), UK in conjunction King’s College (on behest Musharraf and funded by Muammar Gadaffi’s son) during 2009-2010 brought out that 98% of people in J&K do not wish to be part of Pakistan and 50% of people in POK do not wish to remain with Pakistan. That Pakistan may be planning to grant Pakistani citizenship to PLA already deployed in POK and more Chinese Divisions in the offing remains to be seen.

As per the Pakistani High Commission at New Delhi all outstanding issues including J&K were discussed between the two foreign secretaries. Ways to carry forward the Comprehensive Bilateral Dialogue (CBD) which has remained in limbo because of Pakistan’s continuing terrorist activities. All issues discussed apparently included the Pathankot terror attack and India would have raised the issue of reciprocal visit by the Indian investigation team to Pakistan.

Pakistan may be planning to grant Pakistani citizenship to PLA already deployed in POK and more Chinese Divisions in the offing remains to be seen.

As per media reports, Chaudhry also raised the issue of Kulbhushan Jadhav (who was abducted from Iran and paraded to have been captured spying in Balochistan). Interestingly, Pakistan claimed to have captured an Afghan spy too from Balochistan on April 5. It is quite apparent that offence being the best form of defence is being used with impunity by the ISI fabricating all types of lies. Having played the protégé to both the US and China, gaining militarily and financially from both, the Pakistani military finds itself infused with fresh vigour with the PLA having moved into Pakistan.

While briefing the Senate Armed Services Committee on Worldwide Threat Assessment on 9 February, 2016, James Clapper, Director US National Intelligence had just five lines to say about Pakistan in his 28 page report. Clapper stated that relations between Pakistan and India remain tense despite the resumption of a bilateral dialogue in December following the terrorist attack in January on Pathankot Air Force base which New Delhi blames on a Pakistani-based group, and India’s engagement with Pakistan will probably hinge on Islamabad’s willingness to take action against those in Pakistan linked to the attack.

Interestingly, when NSA Ajit Doval had got talking to his Pakistani counterpart Naseer Khan Janjua on foreign lands, the editor of a prominent Indian national newspaper wrote that ‘gold’ had been stuck. It was felt that since Janjua was an Army General and personal pick of Pakistani Army Chief Raheel Sharif, talking to Janjua meant direct line with Pakistani army. India provided all the evidence of involvement of JeM and its chief Masood Azhar in the Pathankot terroris attack. Nawaz Sharif made all the right noises about investigation.

Finally the Pakistani joint investigation team (JIT) visited Patahkot. But just about the time that the Pakistani JIT got back home, Pakistani media commenced publicizing that India had provided insufficient evidence, there was no involvement of JeM and its chief, someone even suggesting that the Pathankot attack was engineered by R&AW in order to blame the ISI. India approached the UN 1267 Committee with all the evidence for Masood Azhar to be designated a terrorist, but displaying her double standards towards terrorism and blind love for Pakistan, China blocked the move using her veto albeit clarifying it subsequently as “technical hold”.

Pakistan’s game is quite clear. Supported by Hurriyat hardliners and terrorists in J&K they want the world to focus attention on Kashmir.

Pakistan then orchestrated abduction of a veteran Indian naval officer working on valid visa in Iran and showcased him as a spy caught in Balochistan coinciding with the visit to Pakistan by the Iranian President.

Abdul Basit, the Pakistani High Commissioner at New Delhi continued to openly entertain Hurriyat separatists and then came out with a statement that that the Indo-Pak talks stood suspended and reciprocal visit by India investigation team was not on the card. Suspension of talks was also echoed by Pakistan’s permanent representative to the UN; even as Pakistan foreign office said talks were still on – usual game of ambiguity.

Concurrent to all this, Pakistan continues to stoke the fires in Kashmir. The violence in NIT, Srinagar with media reporting 2000 non-Kashmiri (media euphuism for non-Muslims) students had left the NIIT and another 1000 non-Kashmiri students having proceeded on leave. Centre was forced to rush in CAPF units with some students alleging local police beat up non-Kashmiri students who actually were the very victims of the student violence. There were calls to move the NIT out of Srinagar which the CM refused. Later, student unrest was also reported in Rajouri.

Violence erupted in Handwara post allegations that a local minor girl was molested by army soldiers. Mobs attacked army columns and even an army camp. The army opened fire in self defence which resulted in five youth getting killed. The girl, was produced before the Chief Judicial Magistrate, Handwara, where she revealed that on her way back from school she was confronted, assaulted and dragged by two boys (one boy being in school uniform) and that no soldier had tried to molest her.

The ISI has also been pumping in fake Indian currency, narcotics and drug money into J&K. Clearly Pakistan, rather Pakistani military, is in no mood for talks with India.

Pakistan’s game is quite clear. Supported by Hurriyat hardliners and terrorists in J&K they want the world to focus attention on Kashmir.

It is vital for the Pakistani military to divert attention from the genocide unleashed by them on the population of Balochistan, and the Shia population of Gilgit-Baltistan where Shias have been reduced from 70% to 50% through demographic invasion, institutionalized killings and steamrolling by draconian military courts.

During 2013, NIA reports had revealed that Kashmiri terrorist groups had received US$ 100 million for terror operations over past two years and in the past decade some Rs 600 crores were diverted to J&K terrorism from within India, Rs 98 crores were diverted in one single year from the J&K Affectees Fund. The J&K Affectees Relief Trust (JAKART) has been facilitating Pakistani infiltration into J&K and Syed Salahuddin, HuM chief has been involved in exploiting (JAKART) for funneling more than Rs 100 crore into J&K.

The ISI has also been pumping in fake Indian currency, narcotics and drug money into J&K. Clearly Pakistan, rather Pakistani military, is in no mood for talks with India.

The US, ironically, has been making perfunctory noises about terrorism while continuing to support the Pakistani military fully. It would not be surprising if this is because Pakistani proxies are available on call to the CIA too.

The recent reports of the US administration and Saudi Arabia having had a hand in the rise of ISIS, and the US shielding the roles of Saudi Arabia and Pakistan are pointers that don’t leave much to imagination. The CIA has had links with Pakistan’s ISI from the days of SEATO-CENTO anyway.

China, with PLA already deployed in Gilgit-Baltistan and raising three Divisions to physically guard the China-Pakistan Economic Corridor (CPEC) can be expected to encourage the Pakistani military to up her proxy war on India. The bottom-line is that talks may continue but there cannot be any positive progress. Afghan President Ashraf Ghani has homed on to this truth already.

3 thoughts on “Beyond the Indo-Pak FS level Talks”