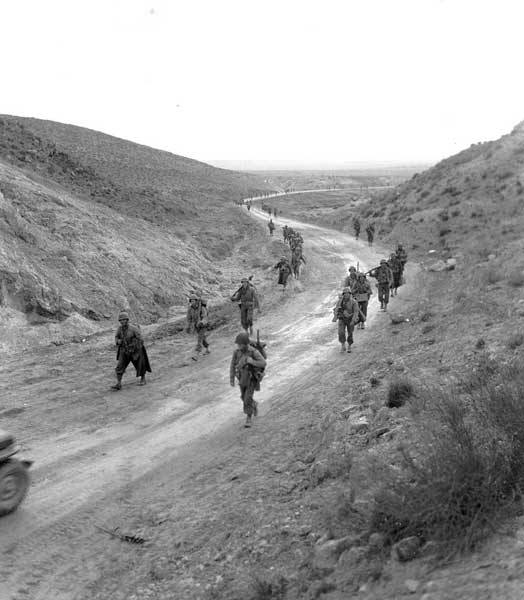 In February 1943, US Forces, under the overall command of Gen Eisenhower, suffered a staggering rout at the hands of much feared Afrika Korps, in the Battle of Kasserine Pass, which holds vital strategic lessons today for the armies in general and China in particular. Even in complete retreat, a much harried Field Marshal Rommel, the formation’s phenomenal commander, broke the back of the 30,000 strong US 2nd Corps, destroying 200 enemy tanks, capturing 60 of these steel behemoths, 4,000 American soldiers and much needed supplies, besides killing 300.

“The proud and cocky Americans today stand humiliated by one of the greatest defeats in our history,” Eisenhower’s naval aide reported in his official diary. Rommel’s masterstroke took the enemy completely by surprise and unmasked its poor fighting quality, a depreciatory revelation about themselves that the Americans stumbled on in an intercept of a German radio report, which only rubbed salt into their wounds.  “The Americans had arrived in north-west Africa with the all swagger that went with parade ground armies,” wrote David Irving, in his masterpiece The Trail of the Fox, based on the field marshal’s extraordinary life. “Captured British and French officers referred to them (derogatively) as ‘out Italians’. . . . Rommel wanted to inflict a stinging blow on American morale—he wanted to show the world that even after a 2000 mile retreat, Hitler’s soldiers could still defeat Eisenhower’s GI, however superior their equipment,” Irving concludes.

Kasserine Pass sends home an unmistakable message that superiority in equipment, numbers, training, materials and even technology, which the freshly minted US forces possessed in abundance, can be no guarantor of victory or even a substitute for combat experience. It is a decisive factor in winning wars, painstakingly acquired and honed in hundreds of battles and engagements, not received in inheritance. The Dragon, which enjoys the dubious distinction of being one of the most assertive and aggressive global powers, gambles on it enormous military muscle, financial clout and above all, psychological warfare.

A number of littoral states in India’s own neighbourhood and elsewhere have virtually succumbed to Middle Kingdom’s dictates, only to derive bitter lessons about being hopelessly trapped!  Never before in modern history, with the sole exception of Nazi Germany, has any nation been so adamant on having its own way on the high seas or on the ground, believing that might is right in a multi-polar order. The world watches helplessly, as the foremost practitioner of policy of intimidation goes about its business, openly contemptuous of the United States, the self-styled champion of democracy which unabashedly props-up autocracies and repressive regimes, but fumbles badly as the only superpower.

However, a point most surprisingly missed by strategic analysts, policy makers and think tanks worldwide, is about China’s biggest handicap, the PLA’s virtually zero exposure to war, post 1979 which Beijing has leveraged into its greatest strength. What better way of achieving strategic goals than by obliquely whittling down an opponent’s resistance through artifice, arms twisting, muscle flexing or even promises of munificence than risking a direct war. “Should the potential victim (still) deviate from the demarcated line,” I had written earlier, “then dire threats follow, more of bluster than any real intent,” until the deal is quietly clinched in China’s favour.

Therein lies the beauty of its grand design, a gigantic charade premised on perception management, deception and deceit so realistically projected that it overawes some of the biggest military powers into virtual acquiescence,  if not submission, thanks to the teachings imbibed from The Art of War, penned by Chinese general Sun Tzu. The tome remains the bible of Beijing’s military strategy. The Dragon may have committed the colossal folly of invading Vietnam in 1979, vowing to teach the tiny yet proud nation a lesson, but learnt something bitter and valuable the hard way, especially after being driven out in sheer ignominy. One, it does not pay to mess around with a country which had humbled the mighty United States and two, waging a campaign of nerves against a rival or enemy could be a lot more cost effective.

The immediate provocation had been Hanoi’s intervention in Cambodia to end Pol Pot’s reign of brutality and genocide. The PLA unleashed huge human waves, backed by artillery and armored support as usual, advancing 20 km into its territory. Far from ordering its Army regulars back home from the neighbouring country, Vietnam rallied its second rung border guards and local militias. The battle hardened cadres, with memories of US invasion still fresh in mind, launched a ferocious counter attack, before which the PLA’s overwhelming firepower and numbers gradually crumbled. The short, brutal war left 20,000 dead on either side, with as many more wounded. Vietnam suffered an additional 100,000 civilian casualties.

Chastened by unexpected reverses and loss of face, the PLA undertook reforms subsequently, with a new leadership and officers replacing the old one. Some of the newer concepts were tested under the leadership of Deng Xiaoping, when he mobilized the PLA in 1984 to checkmate Vietnam’s gains in Cambodia, at the prompting of Prince Norodom Sihanouk.  Accordingly several PLA battalions launched an operation to capture Laoshan and Zheyinshan on April 28, preceded by heavy artillery bombardment for days. They did accomplish their objectives, but only after taking heavy casualties, deploying tactics similar to that used in 1979, but fought on a much smaller scale.

The operation was not an unqualified success though, observes columnist Charlie Gao, in nationalinterest.org website. The only change as Gao notes is that the PLA could shell Vietnamese positions even at night, thanks to the latest night-vision devices. He quotes a Chinese artillery commander as saying he could execute as many fire positions as required in repelling Vietnamese counterattacks, without worrying about munitions, a first in his career. However, it is extremely doubtful whether these reforms or even its military might and even bluster, which form an inseparable part of their strategy, helped the PLA browbeat India in Sumdorong Chu in 1987 or Nathula (1967).

Sumdorong (Arunachal), the third in a series of border engagements with India after Nathula and NEFA (1962), will long be remembered for the daring and the resolute action by the military leadership, following provocative acts of incursion in the area. Gen K. Sundarji, the no nonsense Army Chief at the time, promptly dispatched an entire brigade to stare down the Chinese in the valley, involving the biggest heli-borne operation to date. The PLA blinked and quietly pulled back, vindicating Sundarji’s stand. The Chief fought the political establishment, staking his career and reputation, rather than retreating an inch. He won the day with Prime Minister Rajiv Gandhi backing down.

All this bears out this columnist’s take that the Beijing does not have the inclination or the will to risk real wars, least of all with the Indian Army, easily the world’s most battle hardened in conventional and asymmetric warfare and counter insurgency, at home in extremes of temperature zones and diverse terrains. Doklam is symbolic of the enemy’s loss of nerve after months of stand-off with the Indian Army, which it could not subdue, despite having all the advantages on its side. Can China ever forget reverses in Nathu La and Somdorong. On the other hand, Sinophiles, think tanks and peaceniks still want the world to believe that the Dragon, backed by overwhelming military might and massive resources, would crush India in any conflict. They never tire of exhorting New Delhi to keep a low profile for the fear of antagonizing Beijing, in the light of the humiliating debacle in 1962.

But then they seem to have forgotten the lessons of history. Indian Army could have fought the Chinese on more equal footing, had the political leadership, bureaucrats and pliant military commanders not betrayed the rank and file, out of spite or misplaced motives. The country had enough numbers, equipment, munitions and supplies to take on the PLA, if only the Army had been permitted to acclimatize before hostilities broke out on October 20, 1962. Well trained and equipped Chinese hordes did overrun Indian positions in Ladakh and NEFA (Arunachal). But tiny clusters of Indian jawans, lightly armed with Lee Enfield rifles, sub-machine guns and mortars, kept the enemy at bay, inflicting heavy casualties, especially under the exemplary leadership of Lt Col DS Thapa and Major Shaitan Singh, fighting until their last gasp of life.

China took to sabre rattling the second time in 1967 at Nathu La, questioning the legitimacy of the McMahon Line. But officers and men of the Army were well prepared and refused to back down in the face of provocations. They gave a befitting reply to every act of firing or shelling from the other side, which escalated into a full scale battle at Nathu La and Cho La in Sikkim, between September 7 and 13.

Young subalterns and majors who led the men, killed 300 of the Chinese and wounded 450 others, while sustaining a loss of only 88 men and 163 injured, according to an estimate, forcing the enemy to retreat. The myth of invincibility built around the PLA stood shattered.

2 thoughts on “Battle of Kasserine Pass: Lessons for China”