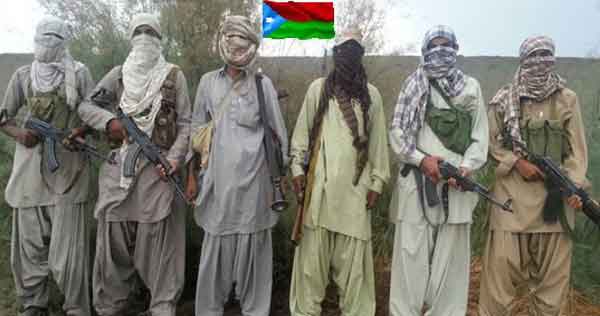 Baloch separatists who are rightly disturbed over the widespread human rights abuse in the province ask why the Federal Government in Islamabad which supports the demand for self determination of Kashmiris in India, should cry foul of the rights of Baloch community for an independent homeland.  Balochs are incensed over the handing over of the Gwadar port to the administrative control of China.

Much before he took over as the National Security Advisor (NSA), India’s famous super sleuth, Ajit Doval, had come out with the thesis that India should hit back at Pakistan, if it ever attempts a repeat of 26/11 Mumbai attack, by supporting the separatist movement in the trouble torn, insurgency ridden Balochistan province. The thrust of this so called “Doval Doctrine” is centred round a well conceived “defensive-offensive” strategy that would give Indian defence forces a sub conventional, second strike capability as and when necessary arises. But how well this strategic vision can be translated into an effective ground level action,it is really difficult to hazard a guess at this point of time.

Many Pakistanis still do not want to hear the Baloch demands but the Baloch movement is not meant for provincial autonomy. There is a full fledged movement for Balochistan’s independence taking place in the province.

However, another line of argument projected by an Indian think tank that India should try to wean away China from its fast expanding involvement in Pakistan— including the management of the strategically located Gwadar port in Balochistan province and the multi –billion dollar China Pakistan Economic Corridor (CPEC)—by offering alluring alternatives, as part of India’s approach to Balochistan crisis, may not work. For China’s relationship with Pakistan is long standing, inter twined, multi layered and a mutually beneficial exercise. Moreover, for China, Pakistan continues to serve as an easily accessible and manageable backyard, offering many long term economic and strategic advantages. On the other hand, China may find it difficult to nudge India the way it handles it Pakistan.

Of course, Baloch separatist rebels have been targeting Chinese personnel deployed in Balochistan for various projects undertaken by the Chinese enterprises. For instance, in March last, Baloch insurgents had set aflame five oil tankers used by a Chinese company. Prior to that Baloch rebels, had abducted Chinese engineers working on mining projects in this sprawling but thinly populated Pakistani province.

The present day Balochistan owes its origin to the amalgamation of the four princely states—Kharar, Makran, Las Bela and Kalat. At the time of the creation of Pakistan in 1947, the most powerful princely ruler, Khan of Kalat had declared Balochistan an independent country. But then the Pakistani army managed to crush the rebellion in 1948. Khan of Kalat now lives in a self imposed exile. He has turned down all the requests by Islamabad to end exile. Evidently, the loss of resources rich Balochistan—after the separation of is eastern wing which emerged as Bangladesh in 1971—could be a terribly disturbing experience for Pakistan and deliver a mortal blow to the very idea of Pakistan as the homeland of the Muslims.

Raheel Sharif pointed out that a lack of development, widespread poverty, poor education and medi-care facilities as well as rampant unemployment have all gone to lend support to the separatist movement in Balochistan.

Pakistani military establishment in Rawalpindi and ruling political dispensation in Islamabad have, over the years, alleged large scale interference by the Indian intelligence agency RAW (Research and Analysis Wing)in the already messed up situation in Balochistan. Beyond this, a section of Pakistani strategic analysts speculate the possibility of the Israeli spy agency fishing in the troubled waters of Balochistan. There is also a school of thought in Pakistan which believes that both the Iranian spy agency and intelligence agency of Emirates are working overtime to foment trouble in Balochistan with a view to wean the business away from Gwadar port, that could pose a serious commercial challenge to the ultra -modern harbour and shipping facilities in Iran and Emirates. Reports in the Pakistani media also point an accusing finger at the Afghan spy agency for its role in fomenting trouble in Balochistan.

Against such a scenario, quite recently Pakistani army chief Raheel Sharif said that Balochistan has become a hotbed of proxy wars for regional and global players pursuing a grandiose strategy. ”Terrorists were externally supported and internally facilitated,” observed Sharif. He pointed out that a lack of development, widespread poverty, poor education and medi-care facilities as well as rampant unemployment have all gone to lend support to the separatist movement in Balochistan. On the other hand, strategic analysts explain that Balochistan which shares a long, porous and poorly guarded borders with Iran and Afghanistan, has gained notoriety for cross border smuggling and infiltration of radical elements associated with Taliban and al Qaida. Incidentally, Balochs are also found in sufficient numbers in both Iran and Afghanistan. Pockets of Baloch population in both these countries are found close to the border stretches with Balochistan.

Incidentally, Baloch militants have vowed to attack Chinese companies working on various projects in the province. Balochs have also opposed the all weather highway forming part of CPEC that would link Gwadar port with Kashgar, the capital of the north western Chinese province of Xinjiang, which has now emerged as a hot bed of separatist Islamic movement. Pashtuns too have lent their support to Balochs in their struggle against this express highway. Pashtuns, like Balochs, are clear in their perception that the developmental projects benefit only Punjabis who wield political power in Islamabad. In large parts of Balochistan the failed state of Pakistani represented by the Punjabis is an illegitimate, colonial player.

For Pakistan, Balochistan is a prized possession because in addition to gas, it has a huge reserve of minerals including coal, gold, lead and zinc.

Indeed, the sprawling, resources rich but sparsely populated Balochistan which accounts for more than 40% of the geographic expanse of Pakistan boasts of a number of separatist groups keen on turning this province into Pakistan’s second Bangladesh. The prevailing environment in Balochistan points out to a strong under current of separatism aimed at the creation of a sovereign homeland for the fierily independent Balochs who are secular in outlook and do not subscribe to radical religious views. In the social and political narrative of Pakistan, Balochistan continues to be a little known part of the country.

“Many Pakistanis still do not want to hear the Baloch demands but the Baloch movement is not meant for provincial autonomy. There is a full fledged movement for Balochistan’s independence taking place in the province. No matter what Pakistan provides them this time, it is not going to help,” says Malik Siraj Akbar, Editor of Baloch Hal, an English online publication espousing the voice of repressed Baloch community. For long, one of the biggest grouse of Balochs was that they didnot receive a fair share of province’s gas and mineral wealth. For Pakistan, Balochistan is a prized possession because in addition to gas, it has a huge reserve of minerals including coal, gold, lead and zinc. It also boasts of the longest coastline of the country.

Baloch separatists who are rightly disturbed over the widespread human rights abuse in the province ask why the Federal Government in Islamabad which supports the demand for self determination of Kashmiris in India, should cry foul of the rights of Baloch community for an independent homeland. Baloch insurgents, who are opposed to the supply of gas to the rest of country from Sui gas field in Dera Bugti, have been attacking gas pipelines and other utilities in the province with recurring regularity. Similarly, Pakistani army convoys and military installations in the province are subject to hit and run attacks by Baloch separatists. Balochs are also incensed over the handing over of the Gwadar port to the administrative control of China. As such, Gwadar ending up a sitting duck to the attacks of well armed Baloch militia cannot be ruled out. On another front, the vastly stepped up killing of migrants from other parts of Pakistan in Balochistan is blamed on the sense of “exploitation” gripping the helpless Baloch community.

Pakistan’s security establishment is keen on radicalizing the population in Balochistan as a counterpoise to the Baloch separatist movement.

As it is, Baloch insurgency acquired a really serious dimension consequent to the cold blooded killing of Nawab Akbar Khan Bugti, a widely respected Baloch tribal leader, way back in 2006. Similarly, the widespread abduction and wanton killing of Baloch youths suspected to be sympathetic to the separatist movement by Pakistani security agencieshas only gone to heighten the desperation and helplessness pervading this poorly developed province.

The ongoing separatist movement in Balochistan, like the movement for the creation of separate Bengali homeland for preserving and strengthening the Bengali cultural and ethnic identity, is focussed on preventing the cultural atrophy of the community. That religion alone cannot constitute the sheet anchor of national identity was convincingly demonstrated by the break up of Pakistan leading to the emergence of Bangladesh as a sovereign independent country in 1972. Indeed as pointed out by Mir Ghaus Bakhsh Bizenjo, a respected political figure of Balochistan, who had stridently opposed the inclusion of Balochistan into Pakistan,“ We are Muslims but it is not necessary that by virtue of being Muslims we should lose our freedom and merge with others. If the mere fact that we are Muslims requires us to join Pakistan, than Afghanistan and Iran, both of which are Muslim countries, should amalgamate with Pakistan.”

However, the situation in Balochistan stands complicated by the Islamic extremist groups stepping up their attacks on Hazara ethnic group professing Shia school of Islam. Pakistan’s security establishment is keen on radicalizing the population in Balochistan as a counterpoise to the Baloch separatist movement. But then in the context of the growing public revulsion in the entire Pakistan against Islamic radicals following the massacre of students and teachers of Bacha Khan University at Charsadda near Peshawar in an attack, allegedly mounted by the cadres of Tehrik-e-Taliban(TTP) based in Afghanistan, Balochistan may not continue to be a safe haven for Islamic militants. And in the changed geo strategic scenario, it may be difficult for Pakistan to hold on to Balochistan for a long time.

7 thoughts on “Balochistan – a Boiling Cauldron”