A program to provide the Australian Defence Force (ADF) with an unrivalled armed reconnaissance helicopter capability achieved a major milestone with the delivery of the last production Tiger Helicopter. 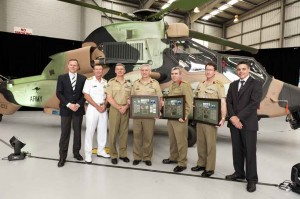 A two-crew helicopter, many of which are now entering into service with armed forces around the world including operational use by French Army in Afghanistan Tiger ARH022 was accepted by Defence at local defence manufacturer Australian Aerospace’s Final Assembly plant on Brisbane Airport.

The formal hand-over ceremony was attended by representatives of the Commonwealth, aviation and aerospace industry executives, senior officers of the Australian Defence Force, and senior management of Australian Aerospace Limited and its parent; Eurocopter.

Acquired under Project Air 87, the Tiger replaces Defence’s existing rotary-wing force comprising Bell 206B-1 (Kiowa) reconnaissance and UH1-H (Iroquois) gunship helicopters. The Tigers have been deployed with the Army’s 1st Aviation Regiment in Darwin, the Army Aviation Training Centre at Oakey in Queensland and at RAAF Edinburgh, in South Australia.

“The Tiger ARH has been a complex and demanding program and one not without its fair share of challenges,’ Dr. Goennemann said. ‘But extensive collaboration and a cooperative approach by Australian Aerospace, our industry partners and the various ADF branches involved has been a significant contributor to where we proudly stand today.”

Dr. Goennemann said delivery of ARH022 did not signify an end to Australian Aerospace’s Tiger relationship with the ADF. “Australian Aerospace will continue to work with Army to support, maintain and bring this important new platform to maturity within the ADF.”

Under Project AIR 87, as well as assembly of the Tigers and delivery of ground crew training systems, Australian Aerospace is also responsible for the overall program management and Through-Life-Support (TLS) of the helicopters throughout their service life.

The Tiger ARH is the world’s most advanced armed reconnaissance helicopter, comprising a streamlined design incorporating cutting-edge technologies. The largely composite airframe makes the Tiger lighter, faster and more agile than its competitors and reduces the helicopter’s radar cross-section.