Attack on Afghan Parliament: Wake Up Call For India 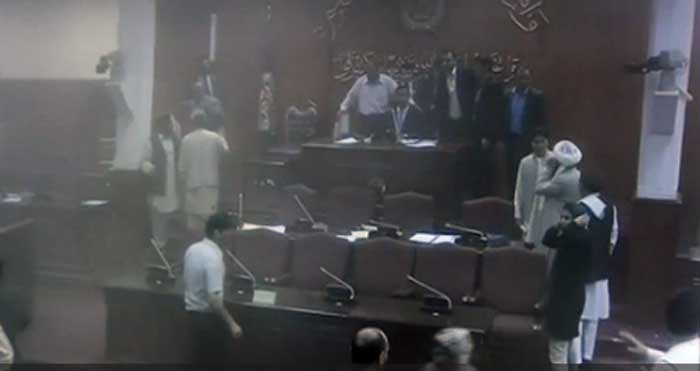 The Afghan Parliament was attacked on 23 June. The Taliban claimed responsibility. Queer, considering that Taliban, has been engaged in talks in overt and secret talks with the new Afghan dispensation, the Pak establishment, the US interlocutors and the latest stakeholders China. Even a decade and half since ‘Operation Enduring Freedom’ Afghanistan faces vicious imponderables. Geopolitical contours of future are difficult to conjure. There are but some tentative outlines.

It did kill the Cold War, but gave birth to an Islamic discourse that fed on religious bigotry, fanaticism, Jihadi terror and suicide bombers.

This western intervention was not without gains. It was indeed a reprieve for the people from the tyrannical and medieval rule of Taliban, all in the name of Islam and Jihad. The civilizational victims of Jihad are invariably pluralism, education, reasoning and women—arguably in the reverse order. The intervention, if nothing else, provided a glimpse of civilization and Afghanistan’s rudimentary image of a nation-state, which was torn asunder by the warring groups spawned by Jihadi machinery assembled byCIA–ISI combine for the decade long war against the Soviet invasion of Afghanistan. It did kill the Cold War, but gave birth to an Islamic discourse that fed on religious bigotry, fanaticism, Jihadi terror and suicide bombers. This discourse travelled far and wide. It travelled to West Asia, Central Asia, Africa, Europe and North America as well. Europe and North America could no longer boast that education and liberty that they offer serve as antidote to Islamic Fundamentalism.

Communism and Islamic Fundamentalism eclipse all ideologies known to mankind in terms of — indoctrination, intolerance and intrinsic violence. India has to contend with both. The US used one to kill the other. It suffered from the reassurance that its homeland was insulated from both the ideologies. 9/11 was a rude awakening. It found it impossible to crush them as ideologies in their life-span are cyclical. Eventually, it decided to use both as leverages on selective basis in different parts of the world and different countries. After all, the US slogan of ‘March of Democracies’ had only limited appeal because of ugly exceptional-isms, Pakistan being the most glaring case.

Has the US altered its strategy or strategic priorities i.e. one from crushing Islamic Fundamentalism and Jihadi Terrorism to containing China?

Jihad and Pivot of Asia Strategy

Insinuations therefore, about American dalliance with the ISIS and patronage to Chicago based ‘International Revolutionary Movement’, an umbrella organization of ultra-leftist groups of the world, is not without basis. Allegedly, exasperated with the current Bangladesh dispensation intransigence over providing base facilities in Chittagong, it has been leveraging on some fundamentalist Islamic groups, like the JMB, to exert pressure on Sheikh Hasina. The Chinese already have a presence in the Bay of Bengal by way of Sittwe in Myanmar and is desperate to develop a deep sea port in Sonadia, south of Chittagong. If the US is serious about ‘Pivot of Asia’ strategy, it cannot possibly leave Bay of Bengal uncontested.

Has the US altered its strategy or strategic priorities i.e. one from crushing Islamic Fundamentalism and Jihadi Terrorism to containing China?

There are some compelling indicators in this regard. In the context of the Indian subcontinent, this seems of have become more pronounced, spurred primarily by Pak-China Economic Corridor and expanding Chinese footprints in Afghanistan and Central Asia. Chinese strategic thrust in Gwadar and in Bay of Bengal are revolutionary maritime developments, serious enough to compel the US to revise its strategy with regard to the Indian Ocean Region (IOR).

Chinese strategic thrust in Gwadar and in Bay of Bengal are revolutionary maritime developments, serious enough to compel the US to revise its strategy with regard to the Indian Ocean Region.

All Jihadi Outfits are but One

An insurgency that has survived for more than two decades is condemned to suffer splits. Taliban is no exception nevertheless fundamentally various groups remain wedded to their fundamentalist Islamic ideology. In their animosity for India and Hindus they remain united.

Various splinter groups were bound to devise new methods to attain the same objective in consonance with the evolving geopolitical realities. Taliban just did that. It divided itself into Afghan Taliban and Pakistan Taliban for establishment of Shariat based Islamic Emirate in Af-Pak region. Years of ‘Jihad’ has weaned them away from any the Pakistan establishment. They not only consider the US and Afghanistan establishment inimical, but are also no longer beholden to Pak military-intelligence complex, notwithstanding the pro-Pak posturing of Afghan Taliban for exigencies of Jihad in Afghanistan. Similarly the Pak Taliban is not unquestionably obligated to Afghan establishment. How can it go un-factored that there has never been the slightest internecine struggle or clash between Afghan Taliban and Pakistan Taliban.

It would therefore not be wrong to infer that majority of Pushtuns in Af-Pak region have become hostile to Pakistan, reverberations of which are being felt in Karachi, as Pushtuns in the city dominate the transport, real estate, drugs and underworld mafia. Pushtuns in Quetta and Karachi were deliberately rehabilitated to change demography so that the resultant ethnic tension acts as a distraction for insurgency by Balochs and Sindhis or MQM respectively.

…there has never been the slightest internecine struggle or clash between Afghan Taliban and Pakistan Taliban.

Afghan and Pakistan Taliban beyond Control

The attack on Army school in Peshawar in December 2014 compelled the Pak Army Chief Gen Raheel Sharif and ISI chief Rizwan Akhtar to rush to Kabul. Together with new Afghan President Ghani they decided to circumscribe the Afghan Taliban and Pakistan Taliban respectively. However, to their dismay they find the two (but one )outfits beyond them. Ideologically, financially and psychologically they are in an autonomous mode. So is most of the Jihadi world in many ways.

The latest but very strong and domineering entrant to the Jihadi world is the ISIS or Daesh. This outfit has carved out a territory and established an ‘Islamic Caliphate’ in northern Iraq and parts of Syria. It controls some oil producing areas as well. Aerial strikes by the WEST and its coalition partners, rather than cause shrinking of Daesh territory has increased its size. Official claims notwithstanding, Operation Zarb-e-Ajb against Pak Taliban by the Pak military is producing no different results.

The ISIS or Daesh has made a very formidable entry in Afghanistan as well. It is expanding its influence beyond Middle East and North Africa. In January this year the ISIS announced creation of Council for the province of Khorasan, historic name for modern day Afghanistan and Pakistan. In March this year President Ghani said “ISIS is operating inside Afghanistan and eyeing the country as a strategic foothold to establish a Islamic Caliphate.”

A plethora of evidence validates that Taliban was a created by Pakistan with tacit backing of American Oil companies and Saudi Arabia to facilitate pipelines and trade routes to Central Asia.

Jihadis from Uzbekistan, Tajikistan and Caucuses, under the banner of ISIS, have been on territory capturing spree in Northern Afghanistan. The ISIS in its dispensation of justice is far more brutal than the Taliban. There have been splits in Taliban, but only ostensibly. Some top Taliban commanders like Abdul Rauf Khadir may have joined the ISIS after supposedly falling out with Mullah’s Omar Deputy Akhtar Mohd Mansur, but again there are no reports of armed clashes or violent rivalry between ISIS and Afghan Taliban. None other than the Governor of Kunduz province has said that the ISIS has been assisting Taliban in capacity building for bigger offensives. As there are secret arrangements between countries, or between states or states and non-state actors—there are also undisclosed links between Jihadi groups as well.

Until 9/11 , it was not only the progenitor Pakistan which backed Taliban. Covertly the US too did business with Taliban regime. A plethora of evidence validates that Taliban was a created by Pakistan with tacit backing of American Oil companies and Saudi Arabia to facilitate pipelines and trade routes to Central Asia.

The US and its allies are not thus spurred by altruistic considerations in their involvement in Af-Pak region. The driving force has always been ‘political economy.’ Both US and Pakistan have consciously not been targeting top Taliban leaders. Zarb-e-Ajband NATO bombings have in effect displaced one million Pushtuns from Waziristan, the leaders continue to enjoy impunity. Mullah Omar, reportedly, remains ensconced in Quetta in full knowledge of Americans. The madrasas being run for the displaced children under the aegis of the UNHCR, continue to poison and radicalize young minds. The syllabus was drawn by the British.

India in face of new geopolitical realities will have to draw a fine balance between containing Chinese strategic expansion in South Asia and in dealing with Jihadi terrorism.

Just as Pakistan was a British enterprise, Islamic Caliphate of ISIS or Pakhtoonistan ruled by Taliban may be an American enterprise. If oil could alter the map of the Middle East , the plentiful availability of shale oil and gas in US could also redraw maps of many parts of this world.

Consequently, India in face of new geopolitical realities will have to draw a fine balance between containing Chinese strategic expansion in South Asia and in dealing with Jihadi terrorism. No longer can India count on the US cooperation in tackling the Jihadi menace that continues to assault the nation’s psyche, social fabric and nation-building.

Hence, the Af-Pak region needs to be treated by India in the vastly altered geopolitical context being scripted by the US and China.

4 thoughts on “Attack on Afghan Parliament: Wake Up Call For India”