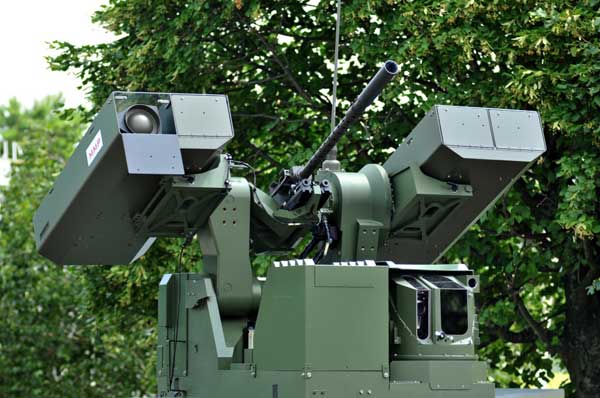 At Eurosatory 2014, MBDA is presenting two new configurations of MMP (Missile Moyenne Portée), the fifth generation land combat weapon system; one on the MPCV (Multi-Purpose Combat Vehicle) and another, in collaboration with Nexter, on the T40 turret.

Conceived primarily for dismounted combat operations, the MMP system demonstrates the extensive modularity that has allowed MBDA to derive new applications for both the French customer and for the export market only six months after the official launch of the programme by France.

“As a fifth generation land combat missile, MMP was conceived from the outset to be network enabled thanks to an infantry firing post equipped with functions including location, orientation and telemetry. These capabilities allow the system to share the tactical situation within the deployed combat unit and to engage both visible and concealed targets as well as non-line-of-sight targets,” explains Jean-Paul Faye, Head of MBDA Land Systems. “These characteristics, which are currently unique for such a lightweight missile and for this class of performance, will enable combat vehicles to be endowed with increased strike and rapid reaction capabilities, features associated with extensive liberty of manoeuvre.”

Since 2012, feasibility studies have been taking place to integrate the MMP system on a land combat version of the MPCV. These studies have intensified following France’s notification of the procurement contract for MMP and have been progressing in parallel with those carried out by MBDA and Nexter for the integration of the system onto the T40 turret. This turret is being developed for a 40mm telescoped canon munition as part of the French Army’s EBRC (Engin Blindé de Reconnaissance et de Combat) armoured reconnaissance and combat vehicle project.

Initial studies have shown that MPCV’s turret sensors (electro-optical, navigation, telemetry) are particularly well adapted for the deployment of the MMP. All that is required as an addition to the existing system is an electronic interface to handle sensor signals. In the vehicle cabin, the firing console already developed for the air defence version of MPCV, will be adapted to MMP’s specific characteristics. Initial simulations show that the missile in its tube, will withstand the mechanical and climatic environment conditions associated with carriage on the turret. These encouraging results have led to studies being launched into the definition of a family of launchers capable of deploying two or four munitions and offering rapid fire and reloading capabilities within an operational context.

To date, mounted on highly mobile, all-terrain vehicles, MPCV has been ordered by several export countries in its air-defence version equipped with four MBDA Mistral missiles and a 12.7mm machine gun. First deliveries took place during 2013.