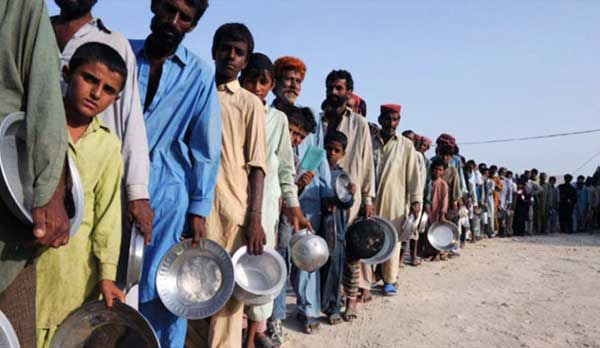 One wonders what Kautilya would have thought sipping aampanna in this scorching heat gazing out of the window of his South Block office or how dismayed Sun Tzu would be at Xi’s Zero Covid policy. The fact is that, in their times neither Kaultiya nor Sun Tzu had to worry about rising sea levels or fallout of climate change.

There is a water shortage of 38 percent this year, hitting hard the two major crop-producing provinces – Punjab and Sindh – and affecting the current crop sowing pattern.

Countries are slowly gravitating toward the ‘Human Security’ construct rather than simply focusing on ‘Military Security’; Human Security encompasses traditional and non-traditional security factors that are territorial and transnational. Food and water security are a major Human Security challenge for countries in South Asia; recent events have showcased the compounding effects of nature’s wrath in escalating water, food, and biodiversity challenges. It is a particular obstacle for Pakistan, as it is not a problem that the military can solve. Although one can argue not just this, there are a host of issues that the Pakistani establishment cannot get to the fathom.

Rising temperatures are speeding up the melting of glaciers, causing an ecological imbalance in the region that leads to floods, crop damage, and shrinking wetlands in Pakistan.

It is a well-established fact in the strategic circles that Pakistan has an acute shortage of water and is likely to face the brunt of water scarcity for sustained periods. The dams like Mangla and Tarbela on Indus and Jhelum rivers are underperforming since the water recharge is irregular beyond Tarbela dam.

Pakistan’s live water storage capacity had reduced to around 13.68 MAF last year, which equals only 30 days carryover capacity from 16.26 million acre-feet (MAF) in 1976, pushing the country to a water-scarce state. There is a water shortage of 38 percent this year, hitting hard the two major crop-producing provinces – Punjab and Sindh – and affecting the current crop sowing pattern.

The new government at the helm faces the old but persistent challenge of food security coupled with the Ukrainian war, spiralling inflation, drought conditions, livestock diseases, fertilizer crisis, and unemployment.

Taliban’s ascendance to power in Afghanistan has also shown it’s detrimental impact on human security in Federally Administered Tribal Areas (FATA), Khyber Pakhtunkhwa (KPK), and Balochistan. 2021 saw inadequate rain resulting in a steady decline in livestock and crop production. However, the situation in KPK is worsening by aggravated fodder shortages and the limited availability of drinking water.

It seems Pakistan did not anticipate the refugee influx in tribal areas post US withdrawal from Afghanistan or was hopeful that the international community would step up its efforts to assist Pakistan in handling the food security of Afghans fleeing Afghanistan. While India has sent its sixth consignment of medicines and 50,000 tonnes of wheat to Afghanistan as humanitarian aid, it is not enough for a country with a 95% population on the brink of starvation.

Against this backdrop, PM Shehbaz Sharif directed the authorities concerned to formulate a strategy to curb theft and smuggling of wheat. Afghanistan and Central Asia have benefited from smuggling, and Pakistani traders have sacrificed their brethren for lucrative gains.

The new government at the helm faces the old but persistent challenge of food security coupled with the Ukrainian war, spiralling inflation, drought conditions, livestock diseases, fertilizer crisis, and unemployment. The economic and domestic instability has amplified the challenge to assist the poorest of the poor in both urban and rural sections of society.

The evolution of Pakistan from a net exporter country of Agri products like wheat, lintels, and other staples to a net importer is a clear indication of the incompetence of the political leaders in running the country (read Imran Khan). Arguably, many Pakistani elites believe as long as the threat does not hit Sindh and Punjab, it is okay for others (Balochistan and KPK) to suffer in Pakistan. But Sindh and Punjab provinces also face the grave threat of large swathes of cultivated land converted into concrete jungles, not only in the big cities but in small districts as well.

Even if the US steps up its food exports to Pakistan, it isn’t something that Pakistan can sustain financially.

The rising food imports and the resultant trade deficit is a daunting task for the new government, as the country has spent over $8 billion on the import of edible food items in the last fiscal year. The oil and edible food import bill has surged 59.98 per cent to USD 21.87 billion in the July-March period, local media reported. The import bill might go up further in the coming months because of the government’s efforts to build strategic reserves of wheat and sugar.

On the sidelines of the ministerial level meeting on “Global food security call to action” in New York, Pakistan and the US reaffirmed the desire to strengthen the bilateral relations. The world has suffered a heavy loss following the effects of the Ukrainian war and the disruption of food supply chains. Even if the US steps up its food exports to Pakistan, it isn’t something that Pakistan can sustain financially. Food security is not a bilateral issue but a multilateral regional issue.

In the 14th SAARC Summit held in New Delhi on April 3-4, 2007, the Heads of States of the South Asian Association for Regional Cooperation (SAARC) signed the agreement to establish the SAARC Food Bank. SAARC Food Bank provided an excellent opportunity for cooperation and coordination to ensure a people-centric food security initiative in the region. Pakistanis in times like this could have benefited a great deal from SAARC had they not torpedoed the warm relations with India by engaging in a ‘policy of thousand cuts’ and subsequent attacks on Indian military establishments.

People in Pakistan realize the gravity of the challenge – crop diversification is very difficult because of the rising population, cereals are water-intensive, and the lack of political will to carry out reforms. Food insecurity isn’t just about food scarcity. Pakistan must not see Food Security in isolation but in a larger context of Human Security. Pakistan being a security-driven hawkish state, must address these asymmetries and disparities within the populous as papering cracks over such contemporary issues gives rise to fissiparous tendencies when exposed for a sustained period.

For India, it is a situation which it can exploit if Pakistan continues to interfere in Kashmir. Food and water insecurity is a readily available tool for creating a rift in society through information warfare in Pakistan. Food instability in South Asia presents an opportunity for diplomatic engagement with SAARC nations, making India a food hub in the long run.