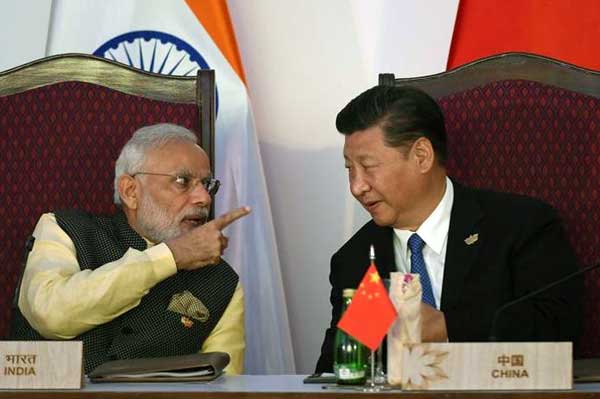 A ‘rising and revanchist’ China has finally discarded from its lexicon the terms ‘Peaceful Rise’ and ‘Harmonious Rise’, as witnessed both during Xi Jinping’s address to the 19th Party Congress in Oct 2017 and his New Year’s address to the nation. It has displayed a propensity to create tensions along its Continental, Maritime and Aerospace that are timed with some major event / visit in the neighbourhood aimed at strategic coercion and to further its core interests in the region. It is also aimed at testing the resolve of the affected nation(s) and is not averse to ‘creating new normals’ by unilateral assertions based on dubious historical claims.

The reclaiming of the shoals in the South China Sea, unilaterally declaring an ADIZ over the East China Sea, unilaterally claiming the South China Sea as its area through its infamous ‘9 – Dash-Line’, stand offs with India across the LAC at Depsang, Chumar, Doklam, Pangong Tso and Bishing (Arunachal Pradesh) are prime examples of its creeping assertiveness. It perceives itself to be a great power, and appears to be pushing towards claiming SE and South Asia as its zone of influence and thereby gain a strategic balance vis-à-vis USA in the region. The BRI projects are aimed at integrating the economies of the developing countries in the region inextricably with China, and thus have profound strategic connotations to shape the geo-political landscape towards a ‘China-Centric’ Asia.

Xi Jinping has openly advocated that the Chinese model of ‘Socialism with Chinese Characteristics’ being the path for other developing countries to follow to achieve modernisation, both during his address to the 19th Congress and in his New Year speech. A ‘rising, liberal and democratic” India provides a counter to this narrative in South Asia, and the ‘Tiger Economies’ of ASEAN in SE Asia. Hence to achieve its Dream of a ‘China-Centric Asia’, China would aim to create tensions for these countries during major events / visits, to show them in poor light.

The forthcoming Republic Day celebrations in India wherein the 10 Heads of State of ASEAN have been invited as the Chief Guest coupled with the 25th Anniversary Celebrations of Indo-ASEAN relations, does provide an opportunity to China to create a combination of Continental and Maritime creeping assertiveness across the LAC and in the South China Sea to create tensions. The Western, Central and Eastern Sectors along the LAC with India does provide a host of options to China for orchestrating a stand-off during this major event either with the Border Defence troops or ‘civilian herders’; concurrently it could increase its assertiveness in the South China Sea, especially within the EEZs of the ASEAN countries. By this it would hope to put a dampener on the events and assert its ‘claimed ascendancy and influence’ in the region.

Later, the Shangri La Dialogue in Jun 2018 provides it an opportunity to show USA in a poor light and as an undependable ally. It would be an ideal event for it to create a major incident in the South China Sea region, like declaring ADIZ, or creating ‘no-fly-zones’ over its ‘reclaimed shoals’, post full militarisation of these islands or use of its Maritime Militia to create tensions with civilian ships and boats in the region, during the conference. It would force USA to either use kinetic means or concede to China’s new assertiveness. These clubbed with assertiveness by North Korea could create tensions in the region stage-managed to show USA as an undependable ally.

However, China may avoid pushing the envelope with regulars currently as the PLA is still in a flux and would need time to stabilise. The Border Defence Force of the PLA is now directly under the CMC and any incident would now lead directly to Xi Jinping’s doorstep, which may not show him as a world leader when he has openly pushed for China to be in the centre stage of world events in the coming years.

As such use of herders and maritime militia provides an escape clause to Xi Jinping despite show of aggressiveness. Hence it is these that may be utilised during the Republic Day 2018 celebrations with the ASEAN leaders; while the Shangri La Dialogue in Jun 2018 could see increased assertiveness by the PLA Navy based on how the North Korean stand-off unfolds.

The coming days would throw light on the trajectory of future Chinese strategic behaviour in the neighbourhood and in SE Asia.

Retired after 37 years of distinguished service, as the ADGMO (B) in 2016,having been closely involved with Future Strategy, Force Structures and Force Modernisation.