Article 371: A mirror of sensitivity of Indian federalism 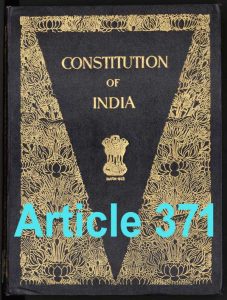 As a part of Chapter XXI of the Constitution of India, Article 371 grants temporary, transition and special provisions to 11 States – Maharashtra, Gujarat, Nagaland, Assam, Manipur, Andhra Pradesh, Sikkim, Mizoram, Arunachal Pradesh, Goa and Karnataka. The idea was to meet the unique needs of these States or regions of these States, protect the economic and cultural interests of these regions, combat the local challenges and protect the customary laws in this region.

Mischievously, a new debate has been forced upon regarding the fate of the Article 371 that contains special provisions designed to preserve the indigenous communities and their way of life through according each of the states and individual special status. The Government critics are creating an apprehension that the next central Government action would be of snatching away Article 371 after it had done away with Article 370 in Jammu & Kashmir.

Union Home Minister recently, in a plenary session of North East Council, stated unambiguously that the Centre will not touch Article 371. This statement was primarily aimed to allay the fear emanating from certain quarter of North-East States.

One has to understand the fundamental difference between these two articles. It would be a reflection of a Constitutional illiteracy, if there is an attempt to equate these two. Article 370 presented an impression of the pendency of the Jammu & Kashmir’s merger with India. It also gave an uncanny opportunity to Pakistan to internationalize the matter and spit venom against India on world forum wherever it got an opportunity.

Article 370 was involuntarily leaving lots of political space to anti India forces to misguide the locals, arouse religious fundamentalism, instigate militancy and launch jihadi terror against the Indian State. It also had notorious features like article 35A – a scar on the Preamble of the Constitution that promises to secure to all its citizens JUSTICE, social, economic and political and EQUALITY of status and of opportunity to all its citizens. On the other hand, a plain and simple interpretation of the provisions of Article 371 makes it lucid that it is to provide an equitable justice to the citizens of certain States of India that the same Preamble guarantees.

On the other hand, the intention behind the provisions of Article 371 is to safeguard the interest and aspirations of certain backward regions or to protect cultural and economic interests of the tribal people or to deal with the disturbed law and order in some parts. This article provides special powers to the Governors of Gujarat and Maharashtra to create independent development boards for Vidarbha, Marathwada, Saurashtra, Kutch and for the rest of Maharashtra and Gujarat.

The legislative intent behind Article 371 is to allow and accommodate the special needs of different States. This is the touchstone of the cooperative federal structure of the Indian Constitution. If we see the subheading of Article 370, it starts with the word ‘temporary’ where as the entire Article 371 starts with the word ‘special’. Thus the major difference between these two articles is that one is ‘temporary’ and other is ‘special’. Article 370 had a negative and limiting connotation so far as it reduced the power of the Parliament as well as the Supreme Court of India making Jammu & Kashmir a ‘state’ within state holding back its integration with India.

There is another fine distinction between ‘special status’ and ‘special category state’. Article 370 provided special status to Jammu & Kashmir so much as it could have a separate Constitution and a Flag. It had a different kind of relationship with Union of India. Article 371 does not grant ‘special status’ to any of the 11 States where it applies. These 11 States and particularly those of northeast, can be said to be ‘special category status’ ; a concept given by the Finance Commission in the year 1969 that provides a special treatment to these States in the form of central assistant, taxes, creating development boards, educational institutions and share in the local Govt jobs.

The provisions under Article 371 are empowering and enabling specially enacted to safeguard the way of life and culture of those states. It did not incite or encourage the secessionist forces of these States who were granted the special provisions. Those provisions are directly for the benefit of the residents and in no way comes in the way of the unitary strength of the India.

The issue of an unlikely event of touching article 371 has been raised by those protagonists who were in favor of permanent continuation of article 370 in Jammu & Kashmir.

Article 371 was intended to insulate the locals from the exploitation by the politicians, business man, bureaucrats, the purpose it has successfully met. Most of the time, it is restricted to certain districts only and as such does not affect the entire State. For example, there are certain restrictions of buy property in some hilly states but that is not for the entire state and covers only specific districts.

The issue of an unlikely event of touching article 371 has been raised by those protagonists who were in favor of permanent continuation of article 370 in Jammu & Kashmir. In fact, the Article 371 has been cited by these sections creating a falsehood of an imaginary Constitutional breach of trust by Govt of India, if the promises made to the States affected by Article 371 are withdrawn. It is a wrong narrative spread by Article 370 crusaders who now seem to have been silenced. A