Article 370 and Nation-Building: A Reality Check 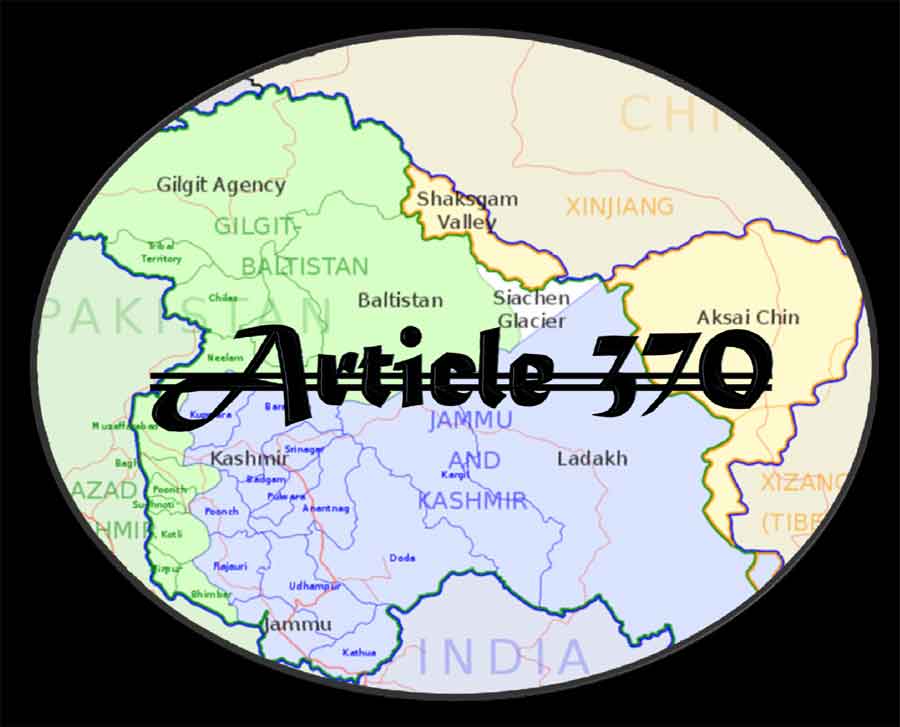 “Nothing is as admirable in politics as a short memory’’

Nation building is an ‘ongoing’ phenomenon and in the case of India’s quest for nationhood, it is definitely ‘work in progress.’ In the light of this (grim) reality check, the raking up of the (unnecessary) debate on the revocation of Article 370 from the state of Jammu and Kashmir (J & K), a pointless and ill-timed controversy has been generated. It is even more unfortunate that a debate on a subject that has both external and internal dimensions; an issue that has plagued the strategic progression of the sub-continent for six decades has been sparked in such a ham-handed manner for short term electoral gains.

…at the time when Article 370 was framed, India was under immense pressure of the self inflicted wound of ‘plebiscite,’ which would have been impossible to win without the support of the Sheikh.

On the contrary, the debate needs to be vilified as on one hand, it hopes to encash on India’s recent democratic victory and on the other hand, Kashmir’s political parties have been quick to take up cudgels with the centre, since this gave them a rabble-rousing issue for milking in the forthcoming state elections. On the other hand, the spectacular electoral victory of a Hindu Rightist Party by a mandate rising above the spectre of caste and religion needs to be seen as the real victory for secularity as envisaged by the framers of India’s constitution and the protagonists of pseudo-secularity and political wheeler-dealers and their ilk need to note this positive change in the mood of the nation. Having said that, since like Mr. John Galbraith, the well-known US Ambassador to India has observed, public memory in politics is notoriously short; certain facts from the not too recent history of India’s tryst as a nation-state, as pertaining to Article 370 are recounted. Since the drama of the accession of the Princely State of J &K is generally well- known, only important points of what makes the story of Article 370 are highlighted as without them, the debate on the revival of Article 370 of the Indian Constitution could take off on a tangent, as done by India’s over-active media.

Apropos, the tribal invasion by Qabalis (tribals) in October 1947, Pakistan was quick to prop up an ‘Azad Kashmir’ government in Muzzafarabad on 25 October, i.e. even before the Indians had militarily intervened in Kashmir (27 October). Around the same time, the strategic Gilgit-Baltistan region of North Kashmir had also been taken over through a clinical coup engineered by English officers favouring Pakistan. Faced with such strategic losses and the wanton brutality of the tribals let loose by Pakistan in Kashmir, credit for setting the stage for India to take on the Pakistan sponsored marauders cannot be denied to Sheikh Abdullah and his National Conference volunteers. It was largely in recognition of the contributions made by the Sheikh firstly in rejecting Mr. Jinnah’s religion based ‘two nation theory’ and later in the first of the Kashmir Wars, that he was entrusted with control of the interim government of J & K.

While this was to be expected in the political environment that prevailed, it needs to be pointed out that in order to legitimise the unique character of the state (only Muslim dominated and being the largest Princely State with contiguous borders with both Pakistan and India), the Sheikh managed to extract concessions that not only went against the essence of secular India, but also against the secularity professed by his own National Conference party. However, these were extra-ordinary circumstances and the events and developments as they were enacted, need to be viewed through the prism of the times. These were considered politically expedient at a time when the nation was still finding its feet, and the credibility of secular India to stay united without the glue of religion was debatable.

Within the promulgation of the Indian Constitution on 26 January 1950, Article 1 made it abundantly clear that J & K was an integral part of India and Article 370 merely defined the state’s ‘special status’ within the Union.

Apart from the uniqueness of the accession of Kashmir, it is also important to highlight that at the time when Article 370 was framed, India was under immense pressure of the self inflicted wound of ‘plebiscite,’ which would have been impossible to win without the support of the Sheikh. This was a reality of the times that was not only known to Pundit Nehru and Sardar Patel, but also to Messer’s Jinnah and Liaqat Ali Khan of Pakistan. It was at this time of swinging fortunes that Sheikh Abdullah, the rallying point and figurehead for the verdict expected to go in India’s favour, was ready to hitch the fate of the state with the secular cauldron that was India in the making. Under the circumstances when the eyes of the world were riveted on India, and the fact that Pakistan enjoyed the favour of her western benefactors due to the compulsions of the Cold War, Article 370 was (skilfully) crafted as a ‘compromise’ between ‘total autonomy’ as demanded by Kashmir (Sheikh and even Maharaja Hari Singh) and ‘full integration’ with secular India.

It was based on this reassurance that on 18 January 1948, Sheikh Abdullah said, “We the people of J & K have thrown our lot with the Indian people, not in the heat of oppression or a moment of despair, but by deliberate choice.” As a quid-pro-quo, the Government in New Delhi respected the state’s character by enacting Article 370. Within the promulgation of the Indian Constitution on 26 January 1950, Article 1 made it abundantly clear that J & K was an integral part of India and Article 370 merely defined the state’s ‘special status’ within the Union. It then went on to stipulate that the Legislative Authority of the Indian Parliament was confined to matters specified in the accession instrument – Defence, External Affairs and Communications. It may be of interest to the readers that the wording of the Accession Instrument was the same as demanded from the other 561 other Maharaja’s, Rajas, Nawabs Nizams and the like of the Princely states.

What makes the integration of the state of J & K different is the fact that despite the impassioned words of Mr Omar Abdullah (Parliament debates), that Kashmir is part and parcel of secular India, it is India, who has been unsuccessful to create conditions for the Kashmiris to feel that they are equal partners in this ‘secular’ nation and stake holders in her progression. Actually, J & K is not the only state to harbour such feelings; there are also other regions that despite sixty-seven years of India’s independence are not overly proud to identify with the largest secular nation of the world. It was because of this disparateness, the government of the times felt it prudent to extend (similar) constitutional concessions (Article 371, ranging from ‘A’ to ‘I’) to many (other) parts of India. Since, the desired results have not been achieved, as is the case in J & K, it is a collective failure of successive governments to assuage their feelings of ‘deprivation’ leading to separatist feelings and it is this failing of New Delhi that needs urgent attention by those now entrusted with India’s political destiny.

…it was rumoured that he (Sheikh) had sought US support for the independence of the state, in return of promising military bases in the state.

Getting back to Kashmir and the debate on Article 370. October 1951, marked the first elections in India based on the principle of ‘universal adult suffrage.’ In view of the immense popularity of the Sheikh, the results in J & K were predictable and all 75 seats were swept by his National Conference. In the opening address itself Sheikh Abdullah again ruled out the notion of independence on the Swiss model, calling it ‘impractical.’ He then went on to elaborate his reasons for not wishing to join Pakistan. “This claim of being a Muslim State is of course only a camouflage. It is a screen to dupe the common man, so that he may not see clearly that Pakistan is a feudal state in which a clique is trying to maintain itself in power.” Sheikh Abdullah, the undisputed Kashmiri leader was appointed as the Prime Minister as scripted in Article 370 to maintain her unique character.

The Delhi Pact that followed on 24 July 1952 was another compromise that helped Sheikh Abdullah to further his hold and permitted the state to have a distinctive identity under its own constitution and flag. The agreement was a follow up to Article 370 that had been framed as a ‘temporary’ provision to be replaced as and when ‘the wishes of the people’ of J & K had been ascertained on the larger issue of merger. Hence, while accession of  J & K per se was similar to the ones signed by other princes, the merger was constitutionally formalised through Article 370 and this was to be ratified ‘as and when’ the people spoke in favour of accession. On the other hand, the state was brought under limited jurisprudence of the Indian Constitution, which now included the provision of taking over governance, in the eventuality of breakdown of law and order – this was a significant move towards closer integration of the state with India.

Notwithstanding, the Sheikh was to shift from his stance taken on plebiscite due to political expediency and in May, 1953, the National Conference set up an internal committee to capitalise on the uncertainty over the issue. In the terms of reference given to the committee, the option of independence was included for the first time and this was seen as treason by the Indian government. The relationship had travelled a full circle as despite espousing the finality of the Kashmiri accession in the UN and the all-out support to the war effort, Sheikh Abdullah did a volte-face. As a result, his relations with the centre now became one of love and hate, despite his personal equation with Pundit Nehru. By 1953, the honeymoon was over and marked a watershed in state’s relationship with the Centre and (unnecessarily) placed the accession under a cloud. Rumour mills in Delhi speculated on the motive of the Sheik’s meetings with Mr Adlai Stevenson, the US Presidential candidate in Srinagar and it was rumoured that he had sought US support for the independence of the state, in return of promising military bases in the state. The situation exacerbated after his meeting with Prime Minister Chou-en-Lai at Algiers and the Sheikh was eventually arrested in August 1953, on charges of ‘inciting communal disharmony; fostering hostile feelings towards India and treasonable correspondence with foreign powers.’

7 thoughts on “Article 370 and Nation-Building: A Reality Check”