Are the Rafales, Mirages? 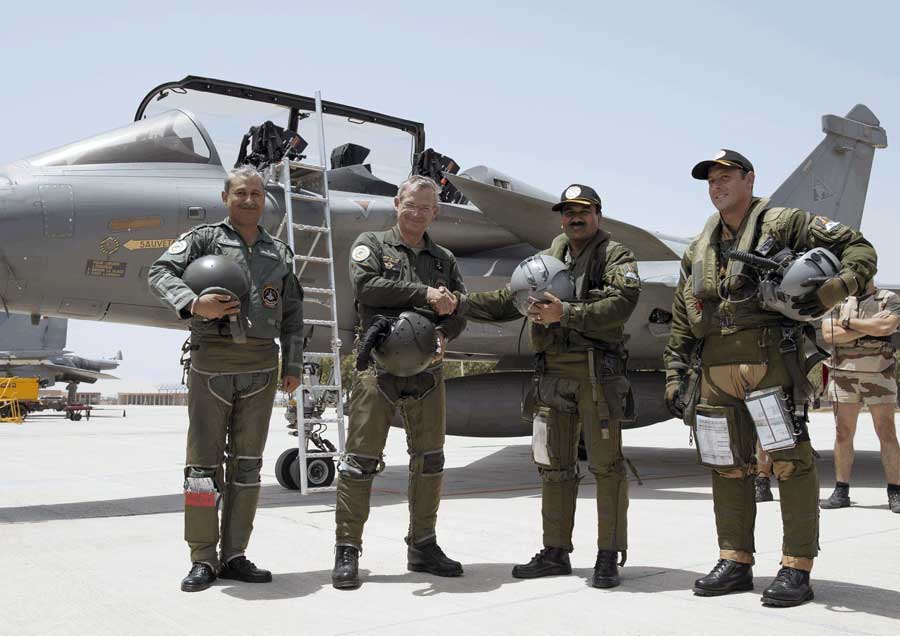 The first dog fight on the French multi-purpose combat aircraft is on in full swing. It is not a battle in the air, but through communiqués, articles by ‘experts’, information and disinformation, and more importantly, tough negotiations which have been facing complex technical hurdles.

“Dassault is patient and tenacious in its pursuit of the Indian deal for 126 fighters,” Trappier admitted. It is normal as the deal is important to France …but to India too.

Negotiators need to find solutions for something which has never been attempted before in India, at that level of technology.

It is also true that India has the reputation to be a country which lives in ‘eternity’; it has serious drawbacks when it comes to defence procurement.

Take Egypt. Field Marshal Abdel Fattah Al-Sissi, the Egyptian President wanted a few Rafales to show off at the forthcoming inauguration of the Suez Canal: the ‘negotiations’ with Dassault Aviation were completed in just 3 months. He bought 24 Rafales from Dassault Aviation; it included 5 to be delivered in time for the function in August. Egypt agreed to shell out the price paid by the French Air Force for its fighters, explained Eric Trappier, the CEO of Dassault. A similar ‘quick’ procedure may happen in the coming weeks with Malaysia and Qatar.

In India however, everything is different. First the political set-up is not the same, one person can’t take the decision on his own (Sissi personally negotiated the deal with the French Defense Minister), but also from the start, Delhi wanted to ‘Make in India’, through a large transfer of technology.

Indeed, everything always takes more time in India. In this case, the process started 14 years ago. The initial Request for Information dates from 2001, while the Request for Proposal (RFP) was only issued in 2007 and as the then minister, AK Antony wanted to add new clauses in the Indian defence procurement policy, such as the Total Life-cycle Costs, the process got further delayed. ‘Complications’ then started.

In January 2012, the French firm Dassault Aviation was selected for supplying 126 Rafales Medium Multi-Role Combat Aircraft (MMRCA) to the Indian Air Force (IAF). The Rafale fighter (in French, ‘rafale’ means a ‘gust of wind’) had gone through a long competitive process which lasted five years, with the American F/A-18 and F-16, Russian MiG 35, European Eurofighter and Swedish Saab Gripen in the race.

…the contract with Egypt is interesting in the sense that one of the main arguments of the anti-Rafale lobby has been that Dassault has not exported any plane so far. Now, this argument is not valid anymore.

Out of the 126 aircrafts to be supplied to the IAF, 18 planes are to be manufactured by the French supplier, Dassault Aviation, from its facilities near Bordeaux in France, while the remaining 108 planes have to be built in India, under a Transfer of Technology agreement, by Hindustan Aeronitical Ltd. (HAL). It is here that serious differences between Dassault and Delhi have appeared.

The complexity of the deal

The complexity of the ‘mother of all deals’ partially explains the delay.

Trappier recently explained that once the contract is signed, France would continue for some time to build the subsystems, which will be shipped to India for assembly in Bangalore: “Over time the manufacture, including the active electronically scanned array (AESA) radar, will be phased over to Indian partners. The timetable is part of the negotiations,” he said.

“Dassault is patient and tenacious in its pursuit of the Indian deal for 126 fighters,” Trappier admitted. It is normal as the deal is important to France …but to India too.

A lot has been written in India about ‘liabilities’ to be incurred during the process of manufacturing 108 aircrafts in India. Should it be entirely the French supplier’s responsibility? Indian Defence Minister Parrikar made it clear that he wanted the same quality for the 108 ‘Indian’ ones, as for the 18 French.

On February 9, Laurent Collet-Billon, the boss of the Armament Procurement Agency (Direction générale de l’armement or DGA) of the French Ministry of Defence for the first time gave a hint of a possible compromise: “Dassault will not be responsible for the whole contract. It is a co-management setup.”

Collet-Billion also admitted: “A lot of progress has been made since 2012.”

This was before the deal with Egypt for 24 Rafales.

The main issue was the cost of manufacturing 108 planes in India, which is probably not easy to calculate, considering that many technologies will be new for HAL.

By the way, the contract with Egypt is interesting in the sense that one of the main arguments of the anti-Rafale lobby has been that Dassault has not exported any plane so far. Now, this argument is not valid anymore.

At the end of February, a few days after the Aero Show 2015 was held in Bangalore, in which 3 Rafales participated, the French Defence Minister Jean-Yves Le Drian met his Indian counterpart Manohar Parrikar “to salvage the multi-billion Rafale contract”, said the press.

An official not wanting to be identified told PTI: “This visit was a serious attempt to thrash out the issues that continue to dog the deal.”

Two months earlier the French Minister had already visited India and met Parrikar to put the negotiations on the ‘fast track’.

The main issue was the cost of manufacturing 108 planes in India, which is probably not easy to calculate, considering that many technologies will be new for HAL.

In a meantime in India, the Parliamentary Standing Committee on Defence recently expressed grave concern “over the dwindling number of fighter squadrons in the Indian Air Force. The squadron strength has come down to 25 from the sanctioned 42.” The Committee’s report which was tabled in the Parliament, stated that the Indian Air Force (IAF) required at least 45 fighter squadrons to counter a ‘two-front collusive threat’, while the government has sanctioned 42 squadrons only: “The revelation is astonishing, and the committee feels that the paradox in the required and sanctioned strength needs to be rectified at the earliest,” commented the Committee.

The IAF should maintain 32 squadrons of 18 aircrafts each. The committee noted: “Moreover, 14 of these squadrons are equipped with MiG-21s and MiG-27s, which will retire between 2015 and 2024. Thus the strength will be reduced to just 11 squadrons by 2024. Our capability has already come down.”

The Committee added that though the IAF has inducted several ‘force multipliers’, such as airborne early warning systems (AWACS), mid-air re-fuellers and tactical airlift aircraft, the dwindling fighter strength operationally means that the supremacy that India has enjoyed over its neighbours is fast eroding. There is no doubt that India needs the MMRCA deal, (the Sukhoi SU-30 is not a multi-purpose aircraft, as Air Chief Marshal Arup Raha reminded the press during the Air Show in Bangalore).

On March 4, during a visit to Dassault’s factory near Bordeaux, Eric Trappier, who accompanied French President François Hollande declared that Dassault Aviation and Hindustan Aeronautics Limited (HAL) will be the ‘joint prime contractors’ to manufacture 108 Rafale fighters in India. This helped clarified the issue of responsibility for the timely delivery and quality of the 108 aircraft manufactured in India.

During a press conference on March 11, Trappier further explained that it was a ‘new development’ (probably arrived at during Le Drian’s visit to Delhi at the end of February). He added: “This is the first time Dassault agrees to be a co-contractor …Dassault and HAL will both take responsibility for the part they will each build on the Rafale aircraft made in India.” He asserted that this was ‘in line with the Indian government’s initial request for proposals’. He also confirmed that Dassault’s price offer remains the same. This is less clear: does Trappier speak for the 18 manufactured in Bordeaux or for the 108 in Bangalore?

…Rafale deal wasn’t to get the least expensive fighter to meet India’s needs, but the aircraft that would best satisfy the nation’s long-range military needs as well as its industrial interests.”

The will to conclude the deal seems present on both sides. No doubt that compromises have to be found and as often in these type of deals, a political intervention at the highest level will be required (for example in the case of Egypt, when Hollande requested French banks to participate). One more occasion to fill up the remaining gap(s) will be the forthcoming visit of Foreign Secretary S. Jaishankar to Paris; officially, he will be there to prepare Prime Minister Narendra Modi’s visit in April, but there is no doubt that the Rafales will be on the table too; it is in the interest of both India and France to have the contract signed at the earliest.

An Indian website  summarized the issue: “By choosing Rafale, India also gains access to cutting-edge technology to advance its aerospace and defense industries. …The entire rationale behind the Rafale deal wasn’t to get the least expensive fighter to meet India’s needs, but the aircraft that would best satisfy the nation’s long-range military needs as well as its industrial interests.”

Even if it is not said, it is also important for Delhi to diversify its procurement of fighter planes; India can’t afford today to put all its eggs in the Russian basket.

Perhaps as an appetizer, the IAF will get its first two upgraded Mirage-2000 with new avionics and weapons before the end of March.

An official told The Times of India: “The upgraded Mirages have been stripped down and virtually re-built with state-of-the-art avionics, radars, mission computers, glass cockpits, helmet-mounted displays, electronic warfare suites and long-range missiles.”

Let us hope that we will not have to wait too long for the main dish.

5 thoughts on “Are the Rafales, Mirages?”