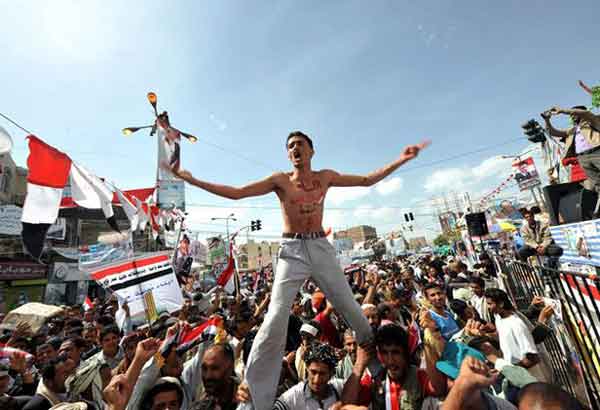 The so-called Arab Spring is proving to be a strong litmus test for diplomacy and democracy at several levels, bilateral, regional, multinational, economic and that which bears features of neoimperialism. The alacrity with which signs of a political transformation affecting a few Arab nations were given the label “Arab Spring” by itself conveys a crucial message. Of course, “spring” refers to a change in season, the period marked by blooming of new flowers and leaves. While it is still not clear as to why and by whom was this label first given to the political transformation being witnessed in a few countries, the similarity in meaning with a few other terms used for this phase cannot be ignored, particularly “Arab Awakening.” This only implies that little time was wasted in creating the impression that the Arab world was heading towards new political transformation, spelling a new turn “for the better,” that is, democratic reforms in the region. It may be noted that perhaps deliberate attention was paid to avoid including the term “revolution” in the description given to this phrase, “Arab Spring.” The label “Arab Spring” was apparently selected to create hype about the brighter future that a political transformation spelt for the Arab nations. It is worth noting that even before the entire Arab world has been affected by this transformation, this label has been tagged on to them.

Considering that all is not quiet, calm and even encouraging for the people in the few nations undergoing a political transformation, the label “Arab Spring” in reality is now inviting more criticism than was probably envisaged initially. It may be more appropriate to understand that appreciating, encouraging or even labelling any movement that displays frail signs of being strong, long lasting and totally people-oriented is equivalent to projecting a mirage before the affected participants, observers and the rest of the world.

Paradoxically, appreciating a diplomatic mirage is by itself a major diplomatic and sociopolitical lapse, the negative impact of which appears to have been virtually ignored by those interested in spreading the hype about the Arab world heading for a major political awakening. And this is not the case of any debate over whether a glass is half full or half empty but symbolically more equivalent to that of heading for a nonexistent glass of water. To begin with, it is imperative to briefly study the incident that is assumed to have triggered off Arab Spring in several nations. On 18 December 2010, Mohammed Bouazizi’s self-immolation in Tunisia in protest against police corruption is believed to have incited a wave of protest in several countries in the region. Please note that Bouazizi indulged in this activity individually. It was not the case of him being one of the demonstrators who had been engaged in protests against their government for a fairly long period of time. Nor was it a case of Bouazizi having opted for self-immolation as a representative of these demonstrators in anger against the then Tunisian government. Nevertheless, it may be assumed that Bouazizi was one of the many Tunisians who were unhappy at the treatment they suffered at the hands of the Tunisian police. His self-immolation played the role of prompting other aggrieved Tunisians to raise their voice through protests, which also led interested politicians as well as diplomats to try and exploit the unrest to turn this political tide as they understood to be suitable for their interests. Herein, attention needs to be given to the hard reality that the role of aggrieved Tunisians remained largely confined to that of protestors. To this day, there is no proof of their having gained by the political transformation Tunisia is undergoing. Yes, it is as yet too early to assume that political transformation has actually undergone a complete process in Tunisia.

Nevertheless, overthrow of the then government in Tunisia is viewed as a sign of success of Arab Spring there. The incident of the burning man was followed within less than three months by the overthrow of the then Tunisian government on 14 January 2011. Considering that Arab Spring is assumed to spell major political transformation for the people, it is a little difficult to accept that its success can be gauged only by the dismissal of the respective governments it is directed against.

The situation would be different if similar protests continue over a long period of time leading to major sociopolitical changes in areas they are taking place in.

The preceding points demand analysis of the probable factors responsible for building hype about Arab Spring. Giving importance to what still has not taken strong roots, that is, creating a false impression about a movement called Arab Spring having swept across the entire region, is equivalent to prompting people to chase a mirage. It is well known that sociopolitical movements heading for major transformation in any part of the world are not expected to lead to immediate results. They can take decades as well as generations before their impact can be sensed substantially enough to be labelled as a part of some “Arab Spring” or “Awakening.” Protests, demonstrations and even rebel activities may occur recurrently or only for a little phase of time. Their aim may be similar, but when they are not backed by strong people-oriented groups or parties, there prevail differences among these groups, there is a lack of clarity in vision of what their actual aim is and they are marked by only sporadic incidents for a limited period of time, it would be incorrect to label these as indicators of any movement. The situation would be different if similar protests continue over a long period of time leading to major sociopolitical changes in areas they are taking place in. It would be appropriate then to consider labelling them as a movement—”Arab Spring” or “Awakening”—depending on transformations they have actually led to. In other words, change of government without spelling any significant transformation for the nation’s sociopolitical culture cannot be defined as a part of any movement.

Here, it would be worth paying a little attention to the manner in which the government is changed, through only internal pressure, with help from external powers or primarily through military intervention of external powers. When external pressure is limited to using means of communication, including diplomatic dialogue, role of media and other means, without engaging in use of armed weapons or military intervention, it would be appropriate to understand this as usage of various diplomatic tactics to exercise influence on developments taking place within a nation. At the same time, the fact that external pressure is exercised, even though only diplomatic, substantially erodes the credibility of these so-called sociopolitical changes as totally national. When external pressure extends to military intervention, it completely erodes the credibility of these being viewed as national movements. The latter, that is, military intervention by external powers, also indicates the limited importance given to using diplomatic means to influence changes in the targeted country. Using war or war-like means to pressurise, rather practically force, change in another country is a crucial pointer to either diplomatic measures having failed or diplomacy being abandoned to ensure the dismissal of a leader and his or her government. Change of this nature can only be considered as that which has been pursued by external powers in pursuit of policies that suit their interests and not as desired or achieved through any movement activated by citizens of that country. The latter point holds irrespective of whether “news” is deliberately spread or even manufactured about the citizens welcoming that particular change. The fact that change has been imposed upon them by external powers cannot be ignored.

With respect to Arab Spring, the hard irony of the few nations being affected by it being Muslim countries stands out. This does demand deliberation on several points. From one angle, there is no denying that an anti-Islam stand is prevalent in certain Western nations. This has been further aggravated by their holding a negative, stereotyped image of Muslim nations and of Islam. In most Western countries, the religion is linked with terrorism, conservatism and backwardness. Undeniably, the anti-Islam attitude has become more pronounced after the United States was hit by terrorist attacks on 11 September 2001. There prevails the conception (or the misconception) in the United States and its allies that the anti-Islam stand is substantial enough to justify the noise they have made about promoting democracy in the Arab region.

…the anti-Islam attitude has become more pronounced after the United States was hit by terrorist attacks on 11 September 2001.

Understandably, the United States and its allies have their right to hold their respective opinions about the Arab world and the religion predominantly practiced here, that is, Islam. Yet, their own stand does not justify their inclination or decision to impose the sociopolitical concepts they are comfortable with in other parts of the world, including the Arab countries. In fact, democracy loses its essential political parameters when it is sought to be imposed on any group of people, a country or a region. It is indeed a tragic irony that the United States, the United Kingdom and their allies understand the symbolic and religious importance of the church and the Bible for them and most Christians. Yet, they have apparently decided not to view religious (Islamic) values upheld by Muslims. Little attention has been paid to U.S. presidents taking oath by the Bible or addressing the nation from a church’s pulpit, royal weddings in Britain taking place in the church and other similar forms of importance given to their religious values. Please note, when they make even a grand and great show of their religious practices, the traditional or conservative label is not tagged to these. But when a Muslim does so, the tendency prevails to tag these labels to his or her identity. Now, the big question here is, who should be viewed as at fault for perhaps deliberately misunderstanding and propagating incorrect images about Muslims and their religion? The tragic irony is that little importance has been accorded to understanding the importance of Islam from the angle of practicing Muslims.

The manner in which hype has been raised about Arab Spring leading to a political transformation, that is, establishment of democratic rule in affected countries, suggests that the West apparently prefers holding a negative opinion about Muslim countries in the region. This helps the West in adding some credence to the noise it makes and the force, including military as well as economic, it uses in the name of helping Arab world move towards a democratic world through a phase labelled as Arab Spring.

Nilofar Suhrawardy is a well-known freelance journalist who has, at different periods, written extensively for national papers.