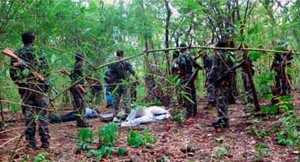 On the morning of 1 December, 14 CRPF personnel including two officers were killed and over a dozen injured in an ambush carried out by the People’s Liberation Guerrilla Army (PLGA) of the CPI (Maoist). The Maoists struck a company of one of the search parties of the CRPF in the Kasalpad forest area of Sukma district, while returning to its base camp at Chintalgupha. A search operation to flush out the Maoists, headed by an officer of IG rank had turned into a major security force disaster, within 48 hours of its launch.

Dense jungles, broken terrain and an absence of roads make the area an ideal hideout for insurgents. This area is home to the Maoists who know every inch of the land like the palm of their hand.

Besides the tragic loss of precious lives, the Maoists also made away with the weapons and equipment of the killed personnel. What is worrisome is the fact that this is the third time in the last two years that the Maoists have been successful in carrying out major attacks in the same general area without any apparent loss to their own cadre.

Earlier, on 11 March this year, the Maoists gunned down 15 security force personnel and a civilian in a similar ambush. Last year, on 23 May 2013, another ambush in Sukma district eliminated a major part of the frontline leadership of the Congress party in the state. Such reverses throw up serious concerns of methodology of operating in these areas, which needs to be addressed on priority.

The forested area where the ambush took place is a known stronghold of the Maoists and falls in the Dandakaranaya Special Zone of the South Bastar District Committee of the CPI (Maoist). This is an extremely underdeveloped area, where the sparse population barely ekes out a living. Dense jungles, broken terrain and an absence of roads make the area an ideal hideout for insurgents. This area is home to the Maoists who know every inch of the land like the palm of their hand. The very backwardness of the area becomes the strength of the Maoists and increases the difficulty level of police forces trying to flush them out. However, continuously suffering casualties of such magnitude throws up uncomfortable questions on the training and preparedness of forces deployed on such tasks.

While the details of what actually happened at the ambush site remain sketchy, the statement made by Mr Siddhu, the IG in charge of the operation, as also another statement made by a spokesperson of the force require deliberation and analysis. As per Mr Siddhu, the ambushed group somehow got separated form the rest of the company, implying thereby that it was under strength and hence unable to react. This statement by itself throws up uncomfortable questions. Even if the company got separated as the IG claims, the strength of the ambushed group was not less than 30 fully armed and trained CRPF personnel, led by a deputy commandant and an assistant commandant. A force of this size certainly has the resilience to fight back an ambush, despite suffering initial casualties.

If a force of this size is considered inadequate by an IG ranked officer, then we have very serious concerns on our hands.

If a force of this size is considered inadequate by an IG ranked officer, then we have very serious concerns on our hands. These get further magnified by the fact that the Maoists had no qualms in ambushing the full company. They would not have known of the separation at the time the ambush was launched. This fact should cause us additional concern. It was also stated by some force personnel that the Maoists used civilians as human shield which prevented the CRPF personnel from returning the fire. This appears unlikely as the PLGA does not advocate using human shields in an ambush. Ambushes are sited after detailed reconnaissance and thorough preparation, with reliance placed on surprise, speed and concentrated fire power at the point of impact. Using civilians as human shields would defeat that purpose.

It is important to analyse what went wrong, for only then can corrective measures be applied. Generally, a platoon sized force of about 30 men would be stretched out over 150 to 200 meters by day while on the move. It appears that the group was not adequately dispersed, which enabled the Maoists to get most of the force in the killing area. Once the firing started, the counter ambush drill was weak. This enabled the Maoists to take control of the area and abscond after removing the personal weapons and equipment from the killed soldiers. While the insurgent does have the advantage of the first strike, the indignity of loss of weapons could certainly have been prevented. It also appears that the company did not have a robust enough internal communication system, which could have enabled extra forces to be called for by the besieged troops in a quick time frame.

What we need to do is to lay greater stress on field craft and battle craft drills, before deploying CRPF companies in a counter insurgency role. The companies need to be trained in complete company groups and not in a piece meal fashion. It would also be better if the CRPF could be deployed in battalion groups under their own leadership rather than in companies under the state police.

The clamour for sophisticated equipment like drones to assist in combat is misplaced. So are mine protected vehicles.

The clamour for sophisticated equipment like drones to assist in combat is misplaced. So are mine protected vehicles. Drones require an extremely sophisticated set up for basic functioning and maintenance and have limited utility in the jungles of Bastar. Mine protected vehicles are easily identifiable and are equally easily neutralised by simply increasing the quantity of explosives in the improvised explosive devices.

We should also have a re-look into the operating philosophy of the forces deployed in an anti insurgency role. Bigger is not always better and instead of large forces combing the area, perhaps we should look into operations by small groups of 6 to 8 men, who move out stealthily from their operating bases by night and lie concealed for two to three days in an area domination role before returning to their bases. Equipped with night vision devices, GPS, sniper rifles, and good communications, such groups can quickly assume ascendancy over the area and force the Maoists on the back foot. The senior leadership too needs a drastic overhaul. Officers parachuted from the IPS to lead the CRPF in combat at the level of IG and DG also needs review if we are to make a headway into gaining ascendancy over the PLGA. Only those officers who have had an exposure to counter insurgency as company and battalion commanders in the CRPF should be designated to lead such forces at the level if IG and Additional DG.

4 thoughts on “Anti Naxal Operations: Initiative must be Regained”