An emotional farewel to INS Vagli

The Indian Navy decommissioned one of her oldest units, INS Vagli in a solemn ceremony at the Naval Dockyard today, 09 Dec 10. The Commissioning Commanding Officer of INS Vagli, Captain (Retd) Lalit Talwar was the Chief Guest on the occasion. He along with the Flag Officer Commanding in Chief Vice Admiral Anup Singh witnessed the lowering of the National Flag and the Naval Ensign for the last time. 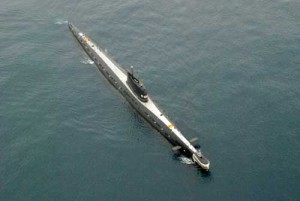 To mark the completion of her services, a paying off pennant was lowered after sunset to the soul stirring Last Post sounded by the Naval Band. The Commanding Officer, Commander Ajay Bhatia thereafter ceremonially reported to the Flag Officer Commanding in Chief Vice Admiral Anup Singh that INS Vagli was decommissioned. Several dignitaries from all over India, including the crew who originally manned her at her commissioning in 1974 arrived at Visakhapatnam to attend the Ceremony.

INS Vagli, a Foxtrot class submarine Type 641B, was commissioned by then Lieutenant Commander Lalit Talwar on 10 Aug 1974 at Riga, Latvia, in the erstwhile Soviet Union. She was the first of the ‘Vela’ class of submarines to be commissioned into the Indian Navy. INS Vagli has completed 36 years of dedicated service under 23 Commanding Officers and is probably the oldest submarine of its class in the world and definitely the oldest unit in the Indian Navy. The submarine has in her operational life participated in almost all major tactical exercises off both the sea boards and elsewhere.

The first submarine to be based at Mumbai, Vagli later shifted base port to Visakhapatnam in 1993. Despite being the oldest unit in commission in the Indian Navy, Vagli continued to serve with distinction. Even in its last Operational cycle she completed 137 days at sea and 1232 dived hours. That the Indian Navy was able to operate a boat of this vintage so effectively also bears testimony to the dedication and skills of generations of maintainers and operators.