Home  >  News  > Homeland Security  >  An Apprehension and Surrender in J&K

An Apprehension and Surrender in J&K 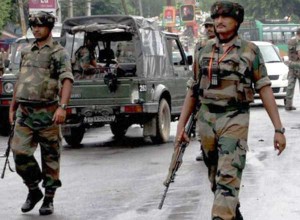 Coming on the heels of locals apprehending two armed Lashkar-e-Taiba [LeT] terrorists [including a self-styled commander’ responsible for many terror attacks and bomb blasts] in Tukson Dhok village in Reasi [J&K], surrender of two trapped terrorists in Hadigam area of South Kashmir’s Kulgam district are both indeed very positive developments for the terrorism weary people of J&K.

In the first case, realising that the time lag between informing security forces regarding presence of two terrorists in their village, and then waiting for them to come and apprehend the duo would give the LeT terrorists adequate time to escape, residents of Tukson Dhok displayed extraordinary courage and overpowered both themselves

While the fact that the terrorists were in possession of two assault rifles, seven grenades, a pistol and ammunition didn’t deter the plucky villagers is really commendable, what makes this act even more noteworthy is that it was the resolute and collective will of the locals not to let terrorists come and seek shelter in their village that motivated them to apprehend the two.

This is not the first or only such incident. In 2009, three LeT terrorists led by a self-styled ‘commander’ named Abu Osama, broke into the house of Noor Hussain in Bhatti village in Shadra-Sharief belt of Rajouri district in J&K. They ordered Hussain to hand over his 20-year-old daughter Rukhsana [who the LeT commander had taken a fancy to] and when her parents and brother tried to resist, the LeT trio started belabouring them with their rifle butts.

On seeing her parents and brother being ruthlessly beaten, Ruhksana, who had been hidden by her mother under a bed emerged from her hiding place and grabbing an axe, hit the LeT commander on his head. This prompted another terrorist to open indiscriminate fire in which a relative which her uncle [who had been forced to guide the terrorists to Rukhsana’s house] was injured.

Undeterred by the firing, the young girl picked up the LeT commander’s gun and shot him dead. Displaying remarkable courage and amazing presence of mind Rukhsana grabbed another AK 47 rifle from a terrorist and threw it to her brother. The brother-sister duo fired at the terrorists, forcing them to flee, leaving behind the dead body of their lecherous commander.

[For her conspicuous act of bravery Rukhsana has been awarded Kirti Chakra, India’s second highest peacetime gallantry award, and is now serving in J&K Police.]

The surrender of two local LeT terrorists in Kulgam district on Wednesday is a good sign which demolishes many myths being spread by Pakistan and its proxies in Kashmir Valley. But before discussing this issue any further, a brief account of this episode.

On receiving specific inputs regarding presence of two terrorists in Hadigam village of Kulgam district, a joint team of Army, paramilitary forces and J&K Policecordoned off the village. As a joint team approached the house where the two terrorists were holed up, they came under fire, and a gun battle ensued. In the meantime, however, the security forces came to know the identity of the trapped terrorists and so they paused the operation till daybreak and contacted the parents of the terrorists, who quickly arrived at the encounter site.

On Wednesday morning, the parents were allowed to make an appeal to their sons to surrender, and luckily, both terrorists did so, bringing a happy ending to what would have otherwise ended up with the death of two young misled Kashmiris and brought lifelong sorrow to their parents. However, this is not the first time that the army and police forces tried to save the lives of trapped terrorists by getting their family members to motivate them to surrender.

The standard operating procedure [SOP] being followed by security forces and police in encounters mandates that under all circumstances, trapped terrorists would be given a chance to surrender-even when they have inflicted fatal casualties on security and police forces. The underlying aim is to preserve human life and so, the forces make all-out efforts to get the parents and family members of holed up terrorists and request them to appeal to their wards to save their lives by laying down arms and surrendering.

The Indian army has one of the lowest incidents of collateral damage during anti-terrorist operations in the world, and that’s why Pakistan and its proxies in Kashmir are unsuccessful in their motivated attempts to portray the Indian army and central/J&K police forces as a trigger-happy lot with no regard for the lives of Kashmiris. So, it’s but natural that the international community doesn’t pay any attention to Islamabad’s fake narrative regarding human rights violations in Kashmir.

This incident has yet once again exposed the brazen lies that Islamabad and Kashmir’s pro-Pakistan lobby have been spreading. What’s pertinent to note here is that the moment the security forces came to know the identity of the trapped terrorists, they immediately paused their operation and brought the parents of the terrorists to the encounter site so that they could persuade their wards to surrender. Would this have happened if the security and police forces were trigger-happy?

Today, Kashmiri youth have to understand that they are being misled through misinterpreted Islamic tenets and false promises that taking human life is ‘jihad’ which will be rewarded by a place in paradise. The youth need to realise that paradise is only for those who truly follow Islamic teachings and faithfully follow the five pillars of Islam- profession of faith [shahada], prayer [salat], distributing alms [zakat], fasting [sawm] and pilgrimage [hajj].

Most importantly, Kashmiri youth have to realise that if picking up guns and killing people really earns one a place in paradise, then why aren’t those who preach this, do the same themselves? This question has often been asked and the stock reply of those who are misguiding and radicalising Kashmiri youth is that they would certainly have done so had they been younger. However, this reply isn’t convincing, because even though age may be an inhibiting factor for picking up guns, why don’t these elderly people ask their own sons to do so? After all, which parent in this world wouldn’t like his beloved son to go to paradise?

And thereby hangs a tale!