An Analysis of China's White Papers on Defense

Have you ever heard of the term ‘Informationization’?

The word is used 48 times in the new White Paper (WP) on Defense1 published by The Information Office of State Council of the People’s Republic of China. It is the sixth WP since Beijing started the biennial exercise in 1998. It is considered (by Beijing at least) to be an attempt at transparency.

In the WP, “˜Informationization is mostly used for Information and Communication Technology (ICT). The extensive repetition of the word shows an important direction in which the Chinese Armed forces are engaged.

But what is this ‘Informationization’ about?

While most classical dictionaries have never heard of the word, Wiktionary says that it is a synonym for ‘Informatization’.

A research paper, Who Owns Informationization? published by Kathleen Hartford of University of Massachusetts/Boston gives a better explanation: “The term, increasingly employed [in China] to describe an overall process, has in recent years become a linchpin of central and many local development strategies, and a talismanic device that is supposed to modernize the party-state system, upgrade ailing parts of the economy, turn the Chinese into true denizens of the 21st century, and plug China into the wider world. And all without undermining the dominant position of the Communist Party and the Chinese state – indeed, while increasing its effectiveness and its reach.”2

In the WP, ‘Informationization’ is mostly used for Information and Communication Technology (ICT).

The extensive repetition of the word shows an important direction in which the Chinese Armed forces are engaged.

This trend is not restricted to the defense sector, Hartford rightly writes: “China’s highest leaders have, increasingly over the past two decades, encouraged, urged, and embraced not only the development of ICT industries but the application and use of ICTs in all spheres of government, industry, education, culture, and even… agriculture.”

Interestingly, Hartford describes the general characteristics of ICTs; they usually do not belong to the domain of the State:

One of the most salient pieces of information in the WP is the evolution of Beijings view on Taiwan which has traditionally been used as the pretext for the navy and artillery build-up.

Though the above particularities are also true in China, the State and more particularly the defense establishment seem determined to make the most of the new technologies in information and communication.

This is certainly one of the most striking features of the WP.

When Beijing speaks of ‘local wars under conditions of Informationization’, its defense establishment means to “take into overall consideration the evolution of modern warfare and the major security threats facing China, and prepares for defensive operations under the most difficult and complex circumstances.”

For China which has been more inclined to protracted People’s Wars, it is a new concept of war. The WP explains that it is: “Designed to bring the operational strengths of different services and arms into full play, combine offensive operations with defensive operations, give priority to the flexible application of strategies and tactics, seek advantages and avoid disadvantages, and make the best use of our strong points to attack the enemy’s weak points.”

The capacity to sustain a war at a distance against a more powerful adversary should be added. In 2006, the Quadrennial Defense Review Report had noted, “[China] has the greatest potential to compete militarily with the United States and field disruptive military technologies that could over time offset traditional U.S. military advantages.”4

It is apparent in the WP that it is one of the objectives of the modernization of China’s defense forces.

Release of the WP

Though entitled China’s National Defense in 2008, the paper was released in January 2009; and not on any odd date. The Chinese, always fond of symbols, chose the day of the swearing-in ceremony of President Barak Obama. Pundits will also point out that it was the Martin Luther King Day, a day dedicated to non-violence: the choice of the State Council is certainly not fortuitous. 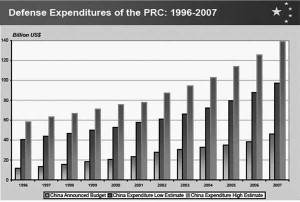 Adam Wolfe, an analyst based in New York, comments on the WP in ‘ISN Security Watch:’5 “As with previous reports, ‘China’s National Defense in 2008’ is short on specifics about equipment and technology. Also, the US intelligence community remains convinced that China has understated its military budget by about 50 percent and is deliberately hiding its intentions. What is notable about the new paper is that it directly addresses the budget.”Though, it may not be a ‘breaking news’ type of publication, many interesting trends emerge while going through the preface and the 14 chapters of the WP6 apart from the ‘Informationization’ being the most important trend.
1 2 3 4 5
Single Page Format
Rate this Article