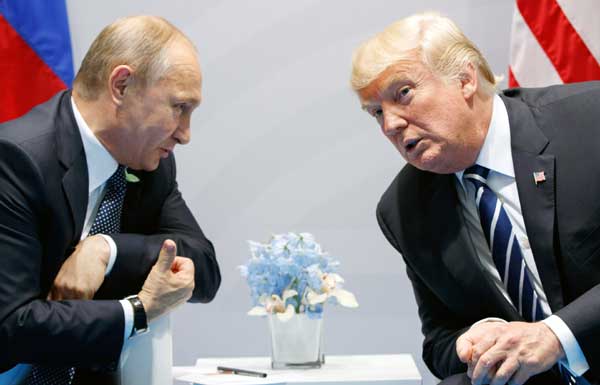 The meeting and brief conversation between US President Donald Trump and Russian President Vladimir Putin during the recent APEC meeting at Manila was watched world over with great interest. Putin apparently told Trump that Russia had no hand in meddling in the US presidential elections.

Later aboard Air Force One, Trump told reporters that he trusts Putin’s denials more than the comments of former intelligence officials, like former high-ranking intelligence officials James Comey, John Brennan and James Clapper, saying, “I mean, give me a break, they are political hacks. “So you look at it, I mean, you have Brennan, you have Clapper and you have Comey. Comey is proven now to be a liar and he is proven now to be a leaker. So you look at that and you have President Putin very strongly, vehemently says he had nothing to do with them.”

The fact that America’s Deep State has been seeking US-Russian conflict past few years is no secret despite the best information campaign. Echoing such sentiment, John Pilger in his article ‘In Ukraine, the US is Dragging Us Towards War with Russia’, dated 13 May 2014 published in ‘The Guardian’ wrote, “Every year the American historian William Blum publishes his ‘updated summary of the record of US foreign policy’ which shows that, since 1945, the US has tried to overthrow more than 50 governments, many of them democratically elected; grossly interfered in elections in 30 countries; bombed the civilian populations of 30 countries; used chemical and biological weapons; and attempted to assassinate foreign leaders”. He adds, “In many cases Britain has been a collaborator”.

John further wrote that having masterminded the coup in February (2014) against the democratically elected government in Kiev, Washington’s planned seizure of Russia’s historic, legitimate warm-water naval base in Crimea failed. The Russians defended themselves, as they have done against every threat and invasion from the west for almost a century. But NATO’s military encirclement has accelerated, along with US-orchestrated attacks on ethnic Russians in Ukraine. If Putin can be provoked into coming to their aid, his pre-ordained “pariah” role will justify a NATO-run guerrilla war that is likely to spill into Russia itself.

That the US lied to the world about Sadam Hussain’s alleged nuclear program to justify its invasion is well known. Presidents and politicians aligned with the deep state flourish – some even securing more than one term. Those who expose the black dealings are sacked off on pretexts that are not difficult to manufacture,  one recent example being Michael Flynn, former head of Defence Intelligence Agency and briefly US National Security Advisor under Trump, who was packed off unceremoniously, the real reason being he publicly exposed in 2015 the ‘willful’ role of the US in the rise of the Islamic State and Jabhat al-Nusra.

Now Senator John McCain has slammed President Trump for believing President Putin that Russia did not interfere in US presidential elections, saying, “There’s nothing ‘America First’ about taking the word of a KGB colonel (read President Putin) over that of the American intelligence community. There’s no ‘principled realism’ in cooperating with Russia to prop up the murderous Assad regime, which remains the greatest obstacle to a political solution that would bring an end to the bloodshed in Syria. Vladimir Putin does not have America’s interests at heart. To believe otherwise is not only naive but also places our national security at risk.”

The frustration of McCain over unfulfilled ambition of becoming the US President have been quite apparent through various uttering, but then isn’t he a terrorist supporter and part of the deep state waging war in different regions? What else was he doing in 2013 hobnobbing with Al Qaeda and Islamic State leaders including Abu Bakr Al Baghdadi (see picture).

Significantly, ‘Mapping the Global Future’, Report of US National Intelligence Council’s 2020 Project, based on consultations with nongovernmental experts around the world published in 2004 exposed that the ‘Caliph Project 2020’ was enacted through Baghdadi, even as Baghdadi is being hunted today by the US.

As significantly, Thierry Meyssan wrote in his article ‘NATO intends to prohibit Russia’s and China’s Development’ published on September 8, 2014, about secret decisions at 2014 NATO summit in Newport (England) to prevent not only Russia and China but, also India from continuing their development and that NATO could count on terrorism from the Islamic Emirate (read ISIS) which it pretends to condemn and fight. Actually, there is nothing surprising about this, because this has been consistently followed by the US deep state through hybrid warfare – including using Pakistan against India from the Nixon-Mao era, contours of which can be gleaned from the book ‘From A Head, Through A Head, To A Head – the secret channel between US and China through Pakistan’ authored by FS Aijazuddin.

With this background, the resurrection of Al Qaeda by Iran, as being portrayed by the west needs to be taken with a pinch of salt – what is the involvement of the American deep state in all this – and how and where Al Qaeda is to be employed next? It is humorous to read, “Only 400 strong when the Twin Towers fell, damaged by the US invasion of Afghanistan and then later overshadowed by ISIS, al-Qaeda now, with its leadership (al Qaeda) split between Iran, Pakistan, and Syria, has quietly rebuilt itself to the point of being able to call on tens of thousands of foot soldiers. Maybe John McCain should be asked wasn’t / isn’t Al Qaeda (and ISIS) being used against the Syrian Government, and how did suddenly 10,000 ISIS cadres emerge to rout two Iraqi Divisions from Mosul in June 2014?

Now the US Congress has authorized to reimburse up to $700 million in Coalition Support Fund (CSF) to Pakistan for activities carried out in support of US operations in Afghanistan. Pakistan will get $350 million of USD 700 million after US Secretary of State James Mattis certifies that Pakistan took demonstrable steps against the Haqqani network. Similarly, in September 2017, the US provided $255 million military aid to Pakistan, with usual conditions attached that Islamabad can access the funds only if it acts against terror groups based in the tribal areas and stop cross-border attacks in Afghanistan. But the US deep state with its CIA-Pakistan ISI links, ensures the aid continues despite Pakistan openly stating it does not require the US anymore, having become a protectorate of China.

The irony of Afghanistan and the attitude of the west is reflected in the statement by Barry Cooper, Senior Fellow, Canadian Defence and Foreign Affairs Institute, who wrote, “Most important are our own interests: we are willing to let Pakistan (and even Iran) establish spheres of influence in Afghanistan because at the end of the day, we really don’t care   how Afghans govern themselves”.

However, the bafflingly ambiguous US policy has been clarified to some extent by Henry Kissinger, who recently said, “The United States is baiting China and Russia, and the final nail in the coffin will be Iran, which is, of course, the main target of Israel. We have allowed China to increase their military strength and Russia to recover from Sovietization, to give them a false sense of bravado, this will create an all together faster demise for them. We’re like the sharp shooter daring the noob to pick up the gun, and when they try, it’s bang-bang. The coming war will be so severe that only one superpower can win, and that’s us folks. This is why the EU is in such a hurry to form a complete super state because they know what is coming, and to survive, Europe will have to be one whole cohesive state. Their urgency tells me that they know full well that the big showdown is upon us. O how I have dreamed of this delightful moment.”

What happens to South Asia in this conundrum of war and how China will use Pakistan and North Korea in this battle for global supremacy needs to be examined. Not without reason China reportedly tested ICBM that can hit anywhere in the US two days before Trump’s recent visit to Beijing.

But getting back to US aid to Pakistan, General John Nicholson, Commander of US Forces Afghanistan (USFOR-A) and NATO’s Resolute Support Mission told reporters that Pakistan had not changed its behavior since President Donald Trump announced his new policy for Afghanistan and the wider region, a policy that specifically called on Pakistan to do more, adding, “No, I haven’t seen any change yet in their (Pakistan’s) behavior”.

It may be recalled that announcing the new strategy for the war in Afghanistan, President Donald Trump had excoriated Pakistan, saying “We can no longer be silent about Pakistan’s safe havens for terrorist organizations, the Taliban, and other groups that pose a threat to the region and beyond.”

The US-NATO troop strength is reportedly being increased to 16,000 or more in addition to the additional 3,000 US has already provided. However, this is not yet formalized since some coalition partners need to seek approval from respective governments.

But the moot question here is, why the continued monetary assistance to Pakistan when there is no change in Pakistan’s behavior. Similarly why the pressure for Indo-Pak dialogue when Pakistan is continuing to wage proxy war on India, cross-border ceasefire violations, infiltration, digging tunnels and the like? When there is no change in Pakistan’s attitude and behavior, why send emissaries to assess the ground situation in J&K; Joshua Goldberg from the Bureau of South and South Asian Affairs, Washington DC visiting Srinagar on September 27, accompanied by another official of the US Embassy at New Delhi, when they could have been briefed in New Delhi itself.

The Indian media, with most media houses based abroad, appears engaged in  perception building that Pakistan is normalizing, but that hardly is the case. Talks between Pakistani Rangers and BSF have been held umpteen times in the past. Sure Pakistan has agreed for Kulbhushan Jadhav’s wife to meet him, but Pakistan is quite capable of a double stab in the back as follow up. Not only is Pakistan refusing to take action against perpetrators of terrorist attacks against India despite rogue-radical mullhas like Masood Azhar bragging they attacked India, Pakistan has just released four accomplices of 26,11 mastermind Hafiz Saeed.

There is a cross-section in India that keeps repeating that Pakistan should change its behaviour, but it would be foolish for Pakistan to do so sitting in the lap of China and continuing to get American funds. For Indians it  will be foolish to forget why US counterterrorism czar (who had decried Bush administration’s invasion of Iraq) referred to Pakistanis as “pathological liars”. While US has designated India as non-NATO ally, hopefully, America’s deep state is not two-timing President Trump on Af-Pak-India. Indian policy makers would do well to take all the above mentioned factors into consideration.