All India National Registers of Citizens and National Security 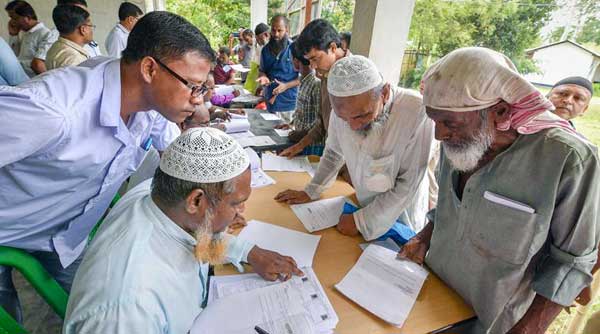 The National Register of Citizens (NRC) for Assam has been in the news past few months. It relates to illegal immigrants, though many would like to paint it as a communal issue. 52,000 Assam State government officials reportedly worked over three years (2015-2018) to produce the final draft. Over 40 lakh people who were left out in the initial draft applied for inclusion in the NRC. The State Coordinator of the NRC stated why over 40 lakh people were left out cannot be disclosed for reasons of confidentiality. The half-finished list of NRC published in January 2018 was on orders of the Supreme Court. Those left are permitted to reapply for inclusion with proof. Even after the final list is published, those not in the list can file affidavits with the foreign tribunal in Assam. This again may take months, maybe years to get resolved because most, if not all of those left out can be expected to file affidavits, assisted and supported from forces within and abroad given the political and communal twist given to this whole issue.

The genesis of the demographic turmoil in Assam can be traced back to 1983, when Congress regime at the Centre passed the infamous Illegal Migrants (Determination by Tribunal) IMDT Act; which virtually shielded illegal immigrants because under its provisions, the burden of proving the citizenship or otherwise rested on the accuser and the police, not the accused – major departure from the provisions of the Foreigners Act, 1946. Besides, it was mandated that the accuser had to be residing within three kilometer radius of the accused. The accuser was required to file an application, not accusing more than 10 persons and deposit a fee. Instituting 1983 IMDT Act specifically for Assam, while Foreigners Act 1946 applied to balance India, was an anti-national act of gigantic proportions with malicious intent. Significantly, the Supreme Court took no suo moto cognizance and did not question the then government.

Before formation of Bangladesh, Sheikh Mujibir Rehman wrote in his book ‘Eastern Pakistan: Its Population, and Economics’ that “because East Pakistan must have sufficient land for its expansion, it must include Assam to be financially and economically strong”. It was only after a legal case was filed against the IMDT Act of 1983 that the Supreme Court finally scrapped this unwarranted Act in 2005. However, the original demography of Assam had been drastically altered over the intervening 22 years. At the same time, illegal immigrants in Assam has not been from Bangladesh alone, but from other countries also – like Myanmar. They would probably include Rohingyas also, including and other than those accepted by the Congress government as UNHCR refugees despite India not being signatory to UN 1951 Refugee Convention nor its 1967 Protocol – another demographic conspiracy fitting into the larger geopolitical game.

How are we keeping track of and addressing the issue of multiplication of numbers of illegal immigrants over the years and its implications towards national security? Take presence of 40,000 Rohingyas in India reported some years back, what would the number have multiplied by now? If PC Chidambaram as Home Minister colonized 4000 Rohingyas in Jammu despite Article 370, and despite India not being signatory to UN Convention of Refugees, that number has multiplied many times over, most holding Adhaar Cards and Ration Cards. UNHCR did not turn Islamist overnight with the recent UNHRC Report on Kashmir. Forces from abroad were obviously playing larger game in synch with the Indian government when latter accepted Rohingya refugees.  The NRC undoubtedly is about illegal foreigners, not Muslims issue as some politicians, scholars and paid media. The question is what now?

The Modi government has announced that the exercise for NRC will be expanded pan-India – to all States and UTs. Even if it can be taken up simultaneously, which is unlikely, how many years would that take to prepare final NRCs of all States and UTs? What happens to those not included in the final NRC of Assam, which too will take considerable time for scrutiny and approval by the Supreme Court? We don’t have any agreement with Bangladesh for return of illegal immigrants. So, how can we repatriate them? Of the Rohingyas ‘accepted’ through the UNHCR without being signatory to UN Convention on Refugees, how can they be repatriated? If Assam alone has 40 lakh illegal immigrants (ballpark figure), what would be the pan-India figure of illegal immigrants in crores? What about their numbers multiplying over the years? What about their children born in India? What about few crores of those milling around in the country without voting rights; and the type of problems that can occur; is this recipe for increasing instability when we have already displayed crass inability to manage social change? Can they be stopped from migrating to other states and acquiring Indian identity, which has already happened at least in Delhi-NCR? We may not give them voting rights but fake cards are also reality.

Is the government confident of repatriating them to parent country, if they have not even been able to relocate 4000 plus Rohingyas out of Jammu despite intelligence reports of their involvement in terrorist activities, including in the terrorist attack on Sunjwan army camp in January 2018? BJP President Amit Shah recently stated that several crore “infiltrators” have entered the country and that after winning the 2019 polls BJP would identify each and every one of them. Are we accusing Bangladesh of infiltration like Pakistan is doing in the West – when successive governments in West Bengal have been fully complicit in illegal immigration to increase their vote-banks, providing them with Indian identity on arrival, and what about security forces under MHA guarding the border – don’t we know that money was fixed per adult and child to crossover? Do we realize how ill-thought loud-mouthing is wreaking havoc within the country and what effect it can have on foreign relations?

These are complex issues that require detailed analysis and clear road map of what can be done, separating rhetoric. Without this, the NRC exercise will boil down to an election gimmick wherein the exercise of de-franchising too may remain only partially effective because of multiple loopholes, no matter the intentions. Along with the calls for NRC at national level, government needs to clarify what it has in mind beyond de-franchising? Thousands of Kashmiri Pandits refugees ousted from J&K are indirectly de-franchised anyway.