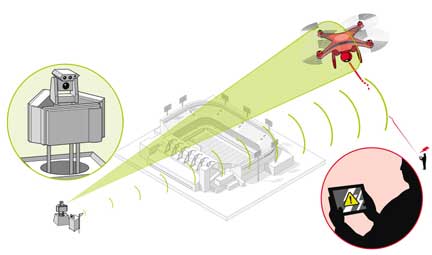 Airbus DS Electronics and Border Security (EBS) and Dedrone, San Francisco, have signed a cooperation agreement and are joining forces to counter the threat posed by small drones. The partners intend to jointly offer counter-UAV systems that allow unmanned aerial vehicles (UAVs) invading critical airspace to be detected reliably so that electronic countermeasures can be initiated at an early stage.

“All over the world, incidents with universally available small drones have revealed a security gap with regards to major events or critical installations such as airports,” said Thomas Müller, Managing Director of Airbus DS Electronics and Border Security (EBS). “By pooling the capabilities of Airbus, with our long-range radar and jamming functions, and those of Dedrone, with their market-leading multi-sensor platform, we have a wide deployment range covering both urban and extra-urban areas.

Dedrone CEO Jörg Lamprecht added: “Small drones are conquering the airspace. But criminals have also discovered this technology and use it to smuggle, to spy and in the worst case to even carry out terrorist attacks. We are therefore delighted to offer, together with Airbus, an effective, complete solution for this new challenge. Our systems complement each other ideally, combining the early detection of drones at short and long range with the capability to automatically initiate effective countermeasures.

The Counter-UAV System to be jointly offered by the companies will have a modular design and will offer the capability to combine various sensors – cameras, radar systems, microphones, direction finders – with different ranges of up to 10 kilometres. The data provided by these sensors will be combined by means of the latest data fusion and signal analysis technologies. On the basis of an extensive database of UAV patterns and signatures as well as real-time analysis of control signals, a jammer then interrupts the link between drone and pilot or disrupts its navigation. As a rule, the drone then flies back to its starting point or lands at its current location. Furthermore, the direction finder tracks the position of the pilot in order to arrest him subsequently.

Thanks to the Smart Responsive Jamming Technology developed by Airbus DS EBS, the jamming signals only block the frequencies used to operate the drone while other frequencies in

the vicinity remain operational. The Counter-UAV System has been tested extensively at Airbus Defence and Space’s own facility and during customer presentations in Germany and France. Depending on the configuration required, an operational system will be available as from the end of 2016.

Dedrone developed the DroneTracker, a unique UAV warning system consisting of optimised hardware and smart software. The DroneTracker is already available and has been successfully deployed in such places as prisons and stadiums. When attached to the front of buildings, the DroneTracker detects approaching drones by means of various visual and acoustic sensors as well as frequency scanners. The signals detected such as noises, movement patterns, silhouette and frequencies are processed and evaluated by the software. In this way, the DroneTracker reliably detects drones within a radius of up to one kilometre, identifies them and alarms the security forces. Countermeasures can be automatically initiated via the interface with the Airbus jamming technology.