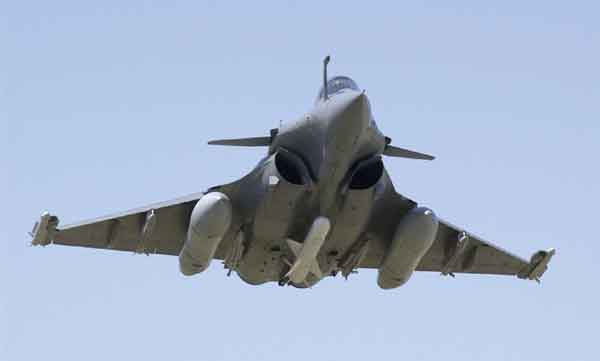 EXOCET AM39 and MICA on Rafale

As the biennial DefExpo gets underway at Goa on March 28th, the state of India’s air power will be a major issue for discussion even though the DefExpo is mainly about land and naval systems. This is because, in a rare public admission, Air Marshal B S Dhanoa, Vice Chief of Air Staff (VCAS), said while briefing the media recently on the eve of Exercise Iron Fist(a fire power demonstration of the Indian Air Force) that the “numbers are not adequate to execute a full air campaign in a two-front scenario.”

The technological ability and the skill to acquire and accurately hit targets on the ground will be key capabilities that the IAF must have.

With a decline in the number of IAF squadrons from the currently authorised strength of 39.5 to 32, the ability of the air force to hit and destroy targets on the ground has also been adversely affected. Well-known South Asia analyst Dr Ashley J. Tellis, Senior Research Associate, Carnegie Endowment for International Peace, Washington, D.C., has emphasised the importance of providing accurate and timely “close air support” to the army in the required quantities in a recent monograph entitled “Troubles They Come in Battalions: The Manifold Travails of the Indian Air Force”.

Tellis has written: “The IAF, like many other air forces, has never given close air support the priority it deserves. It has understandably been reluctant to commit its costly multi-role aircraft for interdiction operations against an adversary’s ground forces because of their vulnerabilityin the low-level attacks that are usually necessary for successful close air support. Instead, it has thrown into the fray its older air defense fighters, such as early model MiG-21s, whose intrinsic design and inability to carry the appropriate ordnance make them ill-suited for this type of combat.”

A future war on the Indian sub-continent will in all likelihood result from the unresolved territorial disputes with China and Pakistan. It will be predominantly a conflict on land. The technological ability and the skill to acquire and accurately hit targets on the ground will be key capabilities that the IAF must have. Multi-role fighter aircraft are very expensive and the IAF does not like to risk using them to strike ground targets in the tactical battle area (TBA) that is usually teeming with air defence weapons.

Joint operations are enhanced by the capability of the air force to quickly deliver a wide range of weapons and massed firepower at decisive points.

During the Kargil conflict in the summer of 1999, air-to-ground strikes by fighter ground attack (FGA) aircraft of the IAF had played an important role in neutralising Pakistan army defences. The destruction of a logistics camp at Muntho Dhalo was shown repeatedly on national television. In conflicts in Afghanistan, the Balkans, Chechnya, Iraq, Libya and, more recently, the ongoing fight against the Islamic State, FGA aircraft have achieved laudable results, especially while using precision guided munitions (PGMs).

Employed in a synergistic manner in conjunction with ground forces, air power is a substantive force multiplier that can pave the way for victory. Interdiction of targets in depth and the provision of sustained close air support to the ground forces is now part and parcel of the tactics, techniques and procedures of conventional combat on land.

Joint operations are enhanced by the capability of the air force to quickly deliver a wide range of weapons and massed firepower at decisive points. In Gulf War II, the US armed forces had raised close air support to the level of a fine art. Air-to-ground strikes were whistled in more frequently than in any other war and were delivered with alacrity in an unbelievable response time of 15 to 20 minutes.

Hence, the importance of battlefield air strikes in modern wars must not be underrated. A few missions of FGA aircraft and attack helicopters can deliver more ordnance by way of 1,000 lb. bombs in a few minutes on an objective selected for capture than the 18 guns of a 155 mm Bofors medium artillery regiment can deliver in 20 to 30 minutes.

The destruction of the adversary’s war machinery will be a major military aim during future wars. IAF aircraft that are earmarked for ground strikes need to be armed with PGMs in large numbers to achieve the desired effect.

During critical situations, particularly in fast flowing mechanised operations in the plains, accurate air strikes can save the day. The battle of Longewala during the 1971 war with Pakistan is a good example. Also, it is a truism that in-your-face air strikes against the enemy in contact with own troops – strikes that can be seen by the troops – provide a major psychological boost to their morale.

The destruction of the adversary’s war machinery will be a major military aim during future wars. IAF aircraft that are earmarked for ground strikes need to be armed with PGMs in large numbers to achieve the desired effect. Free flight 1000 lb. and 500 lb. bombs cannot be dropped with the precision necessary to destroy individual bunkers, pillboxes and armoured fighting vehicles (AFVs).

Modern fighter aircraft flying at supersonic speeds and constrained by the threat posed by air defence weapons in the TBA, such as hand-held, shoulder-fired SAMs like the Stinger and the Unza, cannot be expected to achieve precision with rockets and Gatling guns as they tend to avoid closing in and prefer to release their weapons from stand-off ranges. Only terminally homing laser- or TV-guided bombs and air-to-surface missiles with autonomously homing warheads can provide the necessary reach and accuracy. These are, naturally, more expensive than ‘dumb’ ammunition.

During the Kargil conflict,sustained, accurate and high-volume concentrated artillery firepower and air-to-ground strikes by the IAF eventually turned the tide for India by completely decimating enemy sangars (temporary bunkers) and enabling the infantry to assault virtually unopposed. Tiger Hill and many other enemy held mountain ridges were finally re-captured with very few casualties. The battle winning efficacy of ground and aerial firepower in limited wars was established beyond doubt.

In view of the firepower capabilities that will be necessary to fight and win India’s future wars, the IAF needs to re-assess the suitability of its weapons platforms and ammunition holdings to support operations on land. A dispassionate analysis will reveal that its ground strike capability needs a major fillip. It must launch a concerted drive to acquire the required means and upgrade its capability by an order of magnitude.

The process for acquiring dedicated close air support aircraft must begin now so that their induction begins before the MiG-27 becomes obsolescent.

Ideally, the IAF should raise some squadrons that are equipped with a specialised, dedicated ground strike aircraft. Suitable aircraft include the US A-10 Thunderbolt/Warthog or the Russian SU-39.These aircraft are relatively slower moving, enable greater precision to be achieved in aiming, can carry several tons of payload per sortie, including air-to-ground precision strike missiles and bombs, and can absorb a lot of damage from the enemy’s air defence weapons.

Writing about the role played by US air power during Gulf War-I, General Robert H. Scales Jr. has stated, “The A-10 was devastating once the ground war began and once the aircraft dropped low enough to provide effective 30 mm cannon support.”

Dedicated ground strike aircraft cost only a fraction of the cost of multi-role fighter aircraft such as Mirage-2000 and the Rafale MMRCA. It is certain that in the coming decades, the IAF will continue to be called upon to launch ground strikes with precision munitions in support of the army.

The process for acquiring dedicated close air support aircraft must begin now so that their induction begins before the MiG-27 becomes obsolescent. Simultaneously, the holdings of precision-guided munitions must be significantly enhanced to achieve stocking levels of up to 30 per cent. Also, the time has come to introduce unmanned combat air vehicles (UCAVs) or combat drones into service in large enough numbers to influence operations on ground.

Quite obviously the IAF cannot afford to acquire new, dedicated ground strike aircraft from its present meagre budget. Once the need for such aircraft has been adequately debated and is established beyond dispute, additional funds will have to be provided to the IAF for their early induction.

One thought on “Air Power: Ground Strike Capabilities must be enhanced to Support Army Operations”