AgustaWestland, a Finmeccanica company, is pleased to announce that over 40 delegates attended the first AgustaWestland AW109 LUH/LOH Operators Conference recently held at AgustaWestland’s Vergiate plant in Italy. The event brought operators and industry together to discuss the helicopter’s operations in the Far East, Africa, and Europe. Delegates were also given presentations and updates by representatives from engine and avionics suppliers Turbomeca and Thales. 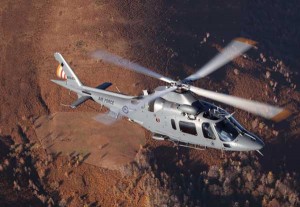 The delegates received briefings by AgustaWestland’s Customer Support, Engineering and  Training Academy organisations and by the main AW109 LUH/LOH programme suppliers and partners. The briefings allowed industry  and operators to share views and information about the aircraft’s operational effectiveness, current and future product improvements and new customer support organisation initiatives that will further enhance the services and response times provided to customers. Briefings were also given on operators “real-life” experiences with the AW109 LUH/LOH in varying operational scenarios including ship board operations.

Richard Nevill, AgustaWestland’s Senior Vice President Customer Support, speaking after the conference said “This first AW109 LUH/LOH event was of great benefit to all participants, allowing operators and industry to openly share ideas, information and experiences that will allow us to continue to improve the service we provide and for the operators to maximise the capabilities and effectiveness of their aircraft.”

The success of this event has already led to the establishment by attendees of the “AgustaWestland AW109 LUH/LOH User Group” to allow them to continue to exchange information on operational aspects and other areas of common interest.

The AW109 Light Utility Helicopter (LUH) has become the world’s best selling military light-twin helicopter, with orders for over 100 helicopters so far, able to satisfy a wide range of land-based as well as sea-based requirements. The AW109 LUH offers state-of-the-art mission-dedicated technology and equipment enhancing operational effectiveness while reducing pilot workload, together with unmatched performance, reliability, availability, serviceability and safety standards. Operators use their AW109 LUHs in a wide range of environmental conditions from the tropical heat of Malaysia to the extreme cold conditions of Sweden in winter. The aircraft is also used for a wide range of roles including training, troop transport, medical evacuation, search and rescue, maritime patrol, observation, armed escort and anti-armour.

Some recent notable AW109 LUH deployments include ones carried out by the South Africa Air Force and Swedish Armed Forces. Up to 16 of the South African Air Force’s AW109LUHs were deployed during the 2010 Football World Cup to provide enhanced security across the country, mainly performing low altitude patrol, utility and medical evacuation duties. The Swedish Armed Forces deployed two helicopters to the Gulf of Aden this year for anti-piracy duties with AgustaWestland actively assisting the urgent requirement by providing various modifications. The modifications included the installation of ballistic protection and sand filters as well as the development of a deployment spare parts package. The AW109 LUH is being evaluated by several potential new customers to meet their future military requirements.