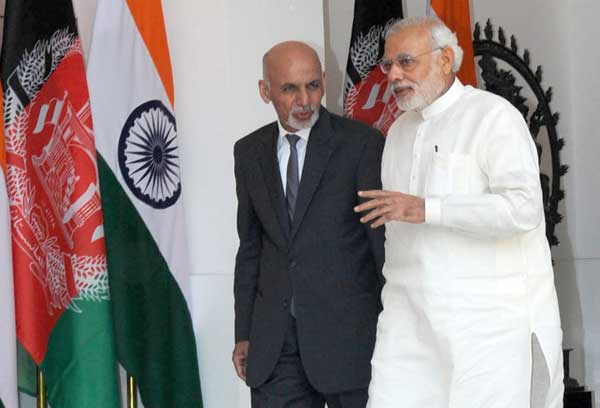 The forthcoming visit of Afghan President Ashraf Ghani to New Delhi next week would be an appropriate occasion for both the countries to re assess their relations in the backdrop of Afghanistan’s bitter experience of last two years of engagement with Pakistan which has manifested in instability in the region and led to a deterioration of security situation especially within Afghanistan.

The latest worry for Afghanistan has been the emergence of (ISIS) Khorasan which primarily comprises elements of Pakistan Taliban elements.

Soon after being elected President Ashraf Ghani reposed faith in Pakistan’s military establishment to deliver peace and stability. He extended a hand for cooperation only to be deceived and betrayed since Pakistan believes that any negotiated settlement for peace in Afghanistan has to be on its terms.

There has been no any let up in Taliban initiated attacks on targets with in Afghanistan killing scores of civilians, security personnel and foreign nationals. The Taliban reconciliation talks and promise of bringing them to the negotiation table never materialized, forcing Afghanistan to cancel the QCG initiated talks. The Taliban have continued to make gains capturing vital territory in Kundruz in the North, Lashkar Gah in Helmend and now in Tarinkot, capitol of Southern Uruzgan district.

The latest worry for Afghanistan has been the emergence of (ISIS) Khorasan which primarily comprises elements of Pakistan Taliban elements.

President Ghani would be much wiser to assess the impact of threat posed by Pakistan backed Taliban after having occupied the exalted position of Afghan Presidency exactly two years back. Having failed miserably to engage with Pakistan, including its Army Chief and ISI, to make them see the futility of pursuing an anti Afghan policy through use of proxies, predominantly Taliban and Haqqani networks, to destabilize Afghanistan, he would be keen to once again re engage with India which has been its most reliable and trusted partner in its reconstruction and development. Indian commitment of having spent US $ two billion on developmental aid including infrastructural development; Salma Dam being the latest project handed over to Afghanistan, building a new Parliament for Afghanistan, institutional capacity building in fields of health, education and food security are a testimony to Indian commitment towards the people of Afghanistan.

India and Afghanistan are signatories to a bilateral Strategic Partnership Agreement signed in October 2011. It was the first ever agreement signed between India and a South Asian nation and was supposed to be a landmark agreement aimed at India’s wider neighbourhood policy to show case its soft power. The agreement besides committing to enhance people to people relations was also expected to train, equip, enhance and build capacity of Afghan National Security Forces to help it mitigate the security concerns of Afghanistan.

To achieve this goal India has been training the Afghan National Army and police personnel to enhance their capabilities but had resisted the request for supplying military hardware which Afghanistan had been consistently demanding until first lot of three Cheetal helicopters was delivered in April 2015 followed by four MI-25 helicopters, delivered to Afghanistan in December 2015.

Compared to India, Pakistan has only played a negative role in Afghanistan during the last three decades. Considering the Indian assistance and signing of the bilateral Indo-Afghan Strategic Agreement as its “Strategic Encirclement” it had done everything possible to destabilize democratically elected government of President Ashraf Ghani through use of proxies. When asked by Afghans to reign in the Afghan Taliban, Sartaz Aziz Pakistan’s de facto foreign minister said that Pakistan had no control over the activities of Afghan Taliban. Its duplicity stood exposed, particularly after killing of Mullah Mansour who was in possession of fake Pakistani documents.

President Ashraf Ghani frustrated with Pakistan and having burnt his fingers changed course mid way through his Presidency to again connect with India looking for a mutually beneficial engagement.

Compared to India, Pakistan has only played a negative role in Afghanistan during the last three decades.

The lifting of sanctions against Iran and Indian commitment to development of Chabahar port provided an opportunity for the three countries; India, Iran and Afghanistan to forge a mutually beneficial relationship and sign the Tripartite Agreement on Trade and Transit. It also provided a space to Afghanistan to reassert itself as an important link between Central, South and South East Asia through better connectivity obliviating the need to use Pakistan territory for access to the Indian Ocean.

However the most important and common factor for convergence of Indian and Afghan interests has been their fight against terrorism emanating from the common source located between the two countries.

Prime Minister Modi has been totally unambiguous in pin pointing source of terrorism in the region. In his address to world leaders during recently concluded G-20 summit in China he stated “one single nation in South Asia is spreading agents of terror in our region”. Reiterating the issue of terrorism affecting the region he again stated at ASEAN Summit “one country in our neighbourhood whose competitive advantage rests solely in producing and exporting terrorism” clearly pointed to the root cause of terrorism in the region.

Similarly President Ashraf Ghani has also pointed to the source of terrorism in his country to its neighbouring country asking it to put an end to its “undeclared war” and crackdown on sanctuaries of Afghan Taliban and Haqqani network on its soil.

Afghanistan has been facing the pressure of Taliban forces post withdrawal of US and NATO troops from its soil. According to a report in The Guardian on 29 July 2016, Afghan forces are in control of only 65.5% districts in comparison to 70.5% districts in January 2016. Major reason for the ANA losing ground is lack of heavy and support weapons which it has been looking desperately to procure to augment its firepower capabilities and spares for Soviet era weapons held by its armed forces. It also has reportedly made a request for additional air assets most of which again are of erstwhile Soviet origin.

In the recent past Indian Prime Minister has made bold statements to reassert the Indian concerns specially to those relating to terrorist activities. It would be in line with current initiative to stand by a time tested friend and extent all possible assistance including military hardware that Afghanistan has been seeking urgently.

The visit of President Ghani to India is also an opportunity to re-commit ourselves to the bilateral Strategic Agreement for development of Afghanistan and extend all possible assistance which Afghanistan has been seeking desperately to withstand the onslaught from Taliban which has been supported by our common adversary.