Advances made by China in the Field of ASW Sonar Systems 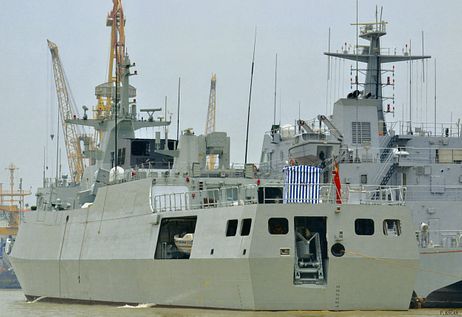 Chinese sonar systems were initially based on Soviet supplied system, and during the 1980s some western ‘sonars’ were imported, including Italian DE-1160, French DUBV23/43, SS-12, HS-312 etc.

H/SJD-1 sonar is an indigenously developed ‘bow-mounted’ sonar, first of its kind in China. Initial proposal of adopting Soviet ‘Tamir-11’ (MG-11, NATO reporting name Stag Hoof) designed for search, light sonar was rejected, because it was not considered adequate enough due to its single beam search capability, which means the low speed of search cycle would easily lose targets. A more capable indigenous Chinese sonar was ordered to be developed, with Mr. Huo Guo-zheng named as the ‘General Designer’. The resulting indigenous Chinese domestic sonar developed was the ‘SJD-1’ low frequency (LF), high power, large aperture sonar with a cylindrical array (designated as ‘Type 601’ Sonar Array). This was accepted into service after eleven major trials at sea. Type 601 sonar array of SJD-1 sonar has a diameter of 2 m, height of 1 m and weight of 4 tons, and the range is 15 kms, more than twice the range of Soviet Tamir/MG-11 search, light sonar originally proposed. SJD-1 sonar was jointly developed by ‘706th Naval Electronics Research Institute’, and ‘726th’ & ‘461th Naval Electronics Factories’, and it is the first bow-mounted sonar adopted by Chinese Navy. SJD-1 is frequently confused with its successor ‘SJD-2’, more commonly referred as ‘SJD-II’, whose design started in the 1970s, but was not completed until the 1980s due to a major redesign. SJD-1 sonar was installed on ‘Luda’ class destroyers and subsequently upgraded to SJD-2 in the 1980s.

It was discovered that SJD-1 sonar cannot provide accurate locations of targets, and the error was too great to be adequate enough to provide fire solutions to onboard ASW weapons. Therefore, the design of ‘Type 051D’ incorporated an additional high frequency (HF) active attack sonar designated as SJD-N (with ‘Type 675’ sonar transducer array) to provide fire solutions, and this attack sonar was subsequently fitted on all Luda class ships. SJD-N was subsequently upgraded to ‘SJD-4’ standards.

H/SJD-2 sonar, more commonly known as ‘SJD-II’, whose design had started in the 1970s, but was not completed until the 1980s due to a major redesign, is frequently confused with its predecessor SJD-1. SJD-2 is part of the effort (the other part being SJD-4) to improve the ASW capability of steam powered Chinese warships by incorporating Italian ‘DE-1164’ sonar technology. DE-1164 consists of 2 subsystems using the same electrical cabinet, ‘DE-1160’ hull-mounted sonar (HMS, with a maximum range of around 20 km) and ‘DE-1163’ variable-depth sonar (VDS, with a maximum range in excess of 50 km). DE-1164 is the first sonar in Chinese service to have integrated the HMS & VDS. ED-1164 was installed on ‘Type 051’ Destroyer for evaluation.

Trials revealed that the performance of DE-1164 sonar was disappointing, with a huge gap between the actual performance and what was specified in documents. However, this was not due to defects of the sonar, but the ship itself (051 Destroyer). Due to the inherent flaws of an old design, this ship is not an ideal ASW platform for advanced ASW systems. The steam propulsion system proved to be the major hindrance, preventing DE-1164 reaching its full potential. The noise and vibration generated by the steam boilers simply created too much interference with the sensitive sonar that it could only reach its full potential when the ship travelled at very low speed. However, at such low speed, the hostile submarine target would easily evade and escape Luda’s attempt to attack. Test results led to two attempts to address the issue going in parallel: one of them was to upgrade SJD-1 with foreign technologies, and secondly have an addition of an attack sonar ‘SJD-4’. SJD-2 is thus an upgrade package for older steam-powered warships.

H/SJD-3 sonar is the Chinese development of Soviet Tamir-11 (MG-11) search purposes, light sonar. SJD-3 hull mounted sonar differs from Soviet MG-11 in that instead of being fixed to the hull like the original MG-11, SJD-3 has a telescoping arm, so when not in use, the sonar is stored in the hull, and when deployed, the sonar is lowered into water several metres below the hull, thus increased detection range by avoiding baffles generated by the hull.

H/SJD-4 sonar resulted in the same experience of evaluation using Italian DE-1164 sonar which had led to the development of SJD-2, the improvement of SJD-1. SJD-4, in turn, is the corresponding upgrade of ‘SJD-N’, utilizing the technologies of DE-1164.

H/SJD-5 is the Chinese development of Soviet Tamir/MG-11, with transistors replacing vacuum tubes in the original Soviet MG-11, thus having reduced size and weight and increase reliability.  SJD-5 sonar has several derivatives, including ‘EH-5’, with integrated circuits replacing transistors, which further developed into ‘Echo Type-5’, adopting LSIC technology. The latest member is ‘SJD-5A’, with VLSIC technology.

ESS-1 sonar and ESS-2 sonar are Chinese VDS and hull mounted sonars (HMS) developed from similar western counterparts. The origin of ESS-1 VDS and ESS-2 hull mounted sonar are subject to debate due to lack of official information, with some sources claim that ESS-2/1 are the Chinese version of ‘DE-1160/1162’ HMS/VDS, while others claim that it is the Chinese version of ‘DUBV-23/43’ HMS/VDS. Since the Italian and French sonars have similar performance (20 kms for HMS, and 50 kms for VDS), it is difficult to determine which is which, since official Chinese governmental sources only confirms the 20/50 km ranges for HMS/VDS. ESS-2 sonar has bearing accuracy of 1 degree and like its predecessors SJD-1/2, it has a cylindrical transducer.

SO-7H sonar is the Chinese version of French ‘DUBA-25’ sonar. As with SJD-7/9, SO-7H also incorporates additional vibration and noise reduction measures up-gradations for use with older steam powered warships in Chinese Navy.

TLAS-1 sonar is the first Chinese towed array with a range of up to 45 kms. This passive low frequency sonar is able to simultaneously track 5 targets, with a bearing accuracy of 4 degrees, and it shares the same operator console as ESS-2 HMS. This is a light towed system, designed for smaller surface combatants.

H/SQG-4 passive ranging sonar fitted on submarines is also known as ‘Type 204’ sonar. It can be either used as part of ‘H/SQZ-262’ integrated sonar system, or as an independent system. Its development started in 1987, and SQG-4 has incorporated western technologies found in French Thomson-CSF ‘DUUX-5’, and it deploys three arrays on each side of the submarine.

‘H/SQG-207’ is a flank sonar newly developed by ‘715th Research Institute’, which first equipped Chinese nuclear submarines, and then conventional submarines during refits. It is the first flank sonar in China.

Chinese synthetic aperture sonar (CSAS) is a SAS developed by a team led by ‘Acoustic Research Institute’ of Chinese Academy of Sciences, partnered with the ‘715th Research Institute’ of ‘China Shipbuilding Industry Corporation’. The program was first begun in Jul 1997 under one of the 863 Programs, and the ‘General Designer’ of CSAS was Chinese Academy of Sciences’ Mr Li Qi-hu, who was also the General Designer of H/SQZ-262 sonar. In comparison to imported ‘SHADOWS SAS’ developed by French firm IXBLUE, CSAS has higher resolutions: the model of CSAS that utilizes both the medium and low frequencies has a resolution of 0.1 m, as opposed to 0.15 m of SHADOWS SAS. The model of CSAS that utilizes high frequency has a highest resolution of upto 5 cm x 3.75 cm.

China has also developed a miniature SAS for autonomous underwater vehicles (AUVs). Developed by the ‘Information and Communication Engineering Research Institute’ of Zhejiang University as part of one of the ‘Project 985’ programs, the ‘General Designer’ of Chinese SAS for AUV is Professor Mr Xu Wen of Zhejiang University.

‘XT02WR01’ sonar is a diver detection sonar (DDS) developed by (Beijing) ‘New Source Yongtai Electro-optics Science and Technologies Development Co. Ltd’ in Beijing. The system can cover up to 150 hectares of area, with an effective range against a diver at 700 m (w/ errors of 0.5 m in distance, 15 m in bearing). The size of the system (wet end) is very compact, with weight less than 50 kg, with a diameter of 0.5 m and a height of 0.65 m. The wet end only needs 200 W of power, same as an ordinary household television, with 220 V power source. The wet end of XT02WR01 sonar can be deployed in a depth up to 40 m deep and can operate in sea state 4 continuously for 3 years, and the entire system can be fully autonomous, operating without any human intervention. The dry end of XT02WR01 sonar system has numerous options based on customer demands, and is linked to the wet end via waterproof fiber-optics cables.

Considering the advances made by China’s PLAN and supply of latest Naval equipment to Pakistan, the Indian Navy’s planners need to come up with a viable strategy to close the ‘Sensors Gap’ with our potential adversaries in underwater warfare capabilities. We presently have just one DRDO Lab working in this field and just one Production Unit viz BEL’s Maritime Systems Division. The last Sonar System developed by them was the ‘USHUS’, designed for submarines. In the next War, we cannot have several naval ships going down in a week’s time. We already have the ‘Khukri’ example, where an ASW Frigate was sent to the waters off Diu on 03 Dec 1971, when its primary Submarine Detection System was not working! Besides the submarine hunting Corvettes that we have, all our remaining Naval ships must also be equipped with ‘hull-mounted’ VDS/towed sonar system, and homing AS Torpedo attack systems. The level of skills of the US Navy and UK Navy personnel in this field, should be attained by our Naval personnel too!