The Airbus Military A400M military airlifter has dropped paratroopers for the first time in a successful demonstration of one of its key roles.

Six freefall paratroopers made jumps from aircraft Grizzly Three in separate passes from 6,000ft at the Fonsorbes drop zone near Toulouse on 4th November.

The paratroopers, two each from the UK armed forces, French armed forces, and the French Centre d’Essais en Vol reported that the aircraft was easier to jump from than other transports. Four of them jumped from the left-hand side door, and two from the ramp. 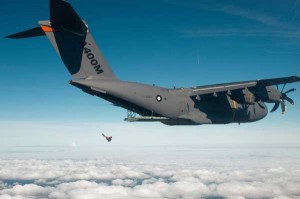 In an earlier flight water-filled balloons were first dropped from the aircraft and, following the paratroopers, specially instrumented mannequins were dropped using static lines. Further trials are planned for 2011.

The A400M can accommodate up to 116 troops sitting face to face, alongside the fuselage and back-to-back along the centre line of the aircraft. And thanks to its wider fuselage which provides more space between the rows, it can carry the same number of fully equipped paratroopers with their chutes and related equipment.

Because of its high speed capability, the A400M can carry the paratroopers faster to where they are needed, and once over the location they can be dropped in less time over a limited area, allowing them to swiftly regroup and to be quickly operational.

The A400M has been specifically designed to allow such very fast dropping. On the one hand, its low speed performance (as low as 110 kt) enables an easy exit from the aircraft. It also reduces the scattering of paratroops and thus permits easier regrouping on the ground. But above all, the A400M permits two paratroopers to jump simultaneously either through the cargo door or through the two lateral doors. This alone reduces the jumping time – and hence the scatter between the first and last to jump – by 50 per cent.

Simultaneous jumping was made possible thanks to the unique aerodynamic characteristics of the A400M, which prevents paratroopers colliding with each other behind the aircraft when exiting the aircraft at the same time. When using the lateral doors, they are helped by sponsons, or aerodynamic fairings around the landing gear bay which are shaped in such a way as to form a step from which the paratrooper can jump, allowing a clean exit from the aircraft. But the shape of the sponson is also extended so as to reduce turbulence behind the aircraft with the aerodynamic flow keeping the jumpers separate.

The A400M is also fitted with a winch which allows hung-up paratroopers to be safely and comfortably retrieved and pulled back into the aircraft.

The A400M is also able to perform from the paratrooper doors, at altitudes up to 25,000 ft, manual delivery of light loads arranged in bundles using static line or free fall technique.