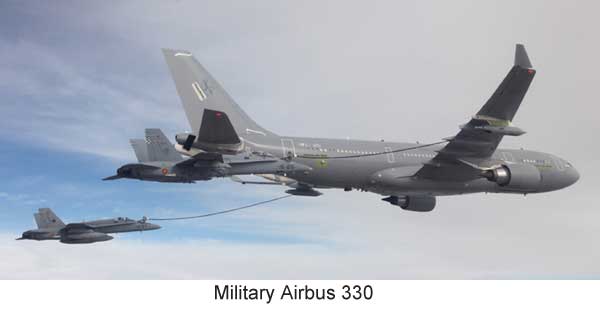 A brief but informative interaction was held with Airbus Military on 08 Feb 2013 during Aero India 2013 regarding the selection & induction plans for the A 330 Multi Role Tanker Transport (MRTT) aircraft for the Indian Air Force (IAF). The aircraft was finally selected as the preferred bid in Jan 2013 over the IL 76. This MRTT is based on the well proven Airbus A 330 civil aircraft which is extensively used worldwide by numerous airlines.

The first aircraft is planned to be rolled out 36 months after contract finalization and all six aircraft will be ready within 51 months from the contract signing date.

The proposal is to acquire six aircraft. The final contract negotiations should start within the next two weeks and are expected to be wrapped up by the end of 2013. Once the contract is signed, standard commercial A 330-200s will be taken from the final assembly line at Toulouse in France to the Airbus Military Conversion Center in Getafe, Spain for fitment of refueling systems & military avionics. This configuration process should take approximately ten months. The first aircraft is planned to be rolled out 36 months after contract finalization and all six aircraft will be ready within 51 months from the contract signing date.

The aircraft has been ordered by Australia (the launch customer), UK, Saudi Arabia & The UAE. The engine manufacturer choice for the other customers has been between General Electric (GE) & Rolls Royce (RR). Australia & Saudi Arabia have opted for the former with UK & UAE choosing the latter.

The IAF aircraft is expected to be similar in configuration to the Royal Air Force (UK) variant as far as the refueling equipment is concerned. The probable configuration is a Flight Refueling Unit (FRU) with a fuselage center line hose with a probe/drogue system as well as two wing refueling pods. The system has to be compatible with the flight refueling systems of the SU 30 MKI, Jaguar, Mirage 2000, Tejas & the Rafale. Refueling trials with slower speed aircraft such as the C 130 & A 400M transports have been done.

…compatible with the flight refueling systems of the SU 30 MKI, Jaguar, Mirage 2000, Tejas & the Rafale.

The A 330 has the same fuel tanks as the civil variant. 111 Metric Tons (MT) of fuel can be carried in the center body & wing tanks. 45 MT of cargo/ passenger equivalent can be carried in addition to the fuel. The IAF configuration could be 291 passengers or 45 MT cargo or a mix of both. Self protection EW suites may be fitted.

Commonality with civil A 330s will go a long way in making procurement of parts, repairs & overhauls of the basic configuration trouble free. The ability to transport cargo & personnel without degrading the refueling capability is an asset for deployment of fighter squadrons to distant bases.